When we start ignoring the law on behalf of illegal immigrants, we lose a little bit of what makes us America. That's not good for us or our guests. 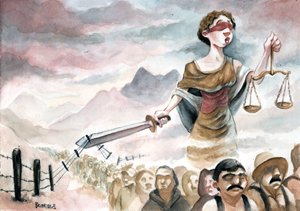 Lelia and I sat quietly in the attorney's office on Central Avenue. Ruth Gorman—a naturalized United States citizen born in Nicaragua—had clearly explained to Lelia her options. I sat in stunned silence, but Lelia, I could see, was not willing to accept this as the final word. Gorman, a petite wife and mother with a California law degree who owns her own law firm, was forceful and brilliant. No, Lelia could not become a U.S. citizen simply because she wanted to, or because she thought she deserved it. She had to go through the same process any other immigrant faced to become a citizen. And the first step in that process was to find a job she was uniquely qualified to do, and then to establish her credibility for that work. It would be a long road that would require a sponsor, hard work, and money.

I could tell Lelia wasn't listening. She sat quietly in the chair to my right, her soft brown hair pulled back and her round face in quixotic peace. Ruth's passionate and razor-sharp explanations were sailing right past her. When I talked to her later, I learned why she was so quiet. She was hoping an easier way would open up—that the law would change or that she would win a permanent visa in the U.S. State Department's lottery. Through the Diversity Immigrant Visa Program, 50,000 permanent resident visas are given to qualified applicants each year. Lelia believed that if she prayed, the Lord would work it out. After coming to America from Brazil almost fifteen years ago, she had decided that staying here was about faith, not the law.

Lelia represented to me an alarming trend I see in many areas of American life: ambivalence toward the rule of law. I'm worried about what will happen to our country if millions of people are integrated into American society who think that breaking the law is okay because they benefit from it. Can this be good for democracy?

She was working for a friend when I met her; she had a sweet temperament, excellent English, and a solid work ethic. I hired her to help with some housekeeping, although I worried about whether the story she told me was true. She said she was here on a visa. She had a social security number and worked at Wal-Mart. But something about this never made sense. As sweet as she was, her attitude toward the law was baffling. She didn't take it seriously.

Although no one knows exactly how many illegal aliens are in North Carolina, the Department of Homeland Security estimated in 2006 that we have the ninth-largest population in the nation—370,000—an increase of 42 percent since 2000. Illegal aliens are a big issue in this year's election, and a hot topic for us locally. Congresswoman Sue Myrick, a former mayor of Charlotte who is up for reelection this fall, has pressed the Department of Justice to get an immigration court in North Carolina. One was supposed to open in Charlotte in April, but there have been delays.

For the illegals, ambivalence towards the law defines their daily existence; they are citizens in no man's land, they are neither patriots nor expatriates. The hard truth is that they are in our country for personal gain. It's been reported that 55 percent got into the country illegally and that the rest are here on expired visas (at least six of the 9/11 hijackers had expired visas). More than half broke American law to get here; they all are breaking it to stay here. When I think about the impact this will have on our country's future, I am troubled. The problem belongs to all of us, for our failure to uphold the rule of law has enabled theirs. We have looked the other way while mercenaries have settled among us; we've been shaking a finger with one hand and handing them cash with the other.

Other problems have arisen as a result—among them, human rights concerns. I have a niece at Davidson College who volunteers at a free medical clinic used by illegal aliens. The stories she tells are heartbreaking. People living in secrecy are not going to get the medical help they need, or for that matter, the legal help. What woman will call the police on her abusive husband if she is an illegal alien? Unfortunately, a loss of human rights by one segment of our population will affect all of us. I learn about this from the international students I tutor—today, in fact, a young woman told me about her best friend who is locked in an arranged marriage in West Africa. It's tragic. Yet the true crisis we face is not about human rights or even about immigration, but about our own commitment to protect and promote the rule of law.

Democracy is a complex idea. Without an effort to educate immigrants on how democracy is made secure by the rule of law, we jeopardize our own future. In the March issue of The Atlantic Monthly, the magazine published results of a poll of foreign-policy experts on democracy's chances around the world. The magazine asked if democracy is inevitable. The majority—63 percent—answered no. One expert responded: "We seem to have forgotten that democracy is an organic phenomenon—that…it is the outcome of specific histories, cultures, ethnicities, and events, fused together over…time. We do not simply add water, as so many of our foreign-policy elite would have it, and get George Washington."

"Add water and get George Washington"—this is an attitude that supposes democracy is a formula, easily mixed with predictable results. But we are learning through tragic foreign policy decisions that this is not so. We can't insert ourselves into foreign countries and create democracy, and foreigners can't come here and get it by osmosis. It's a precious treasure that should be carefully shared with respect, with awe, and with reverence.
America is like our house, and those who come here should be treated like those who come to our home. Do houseguests sneak into our back yard under our fence and hide in our basement? Of course not. We go to the front door to meet our guests; we greet them and bring them in. At present we're acting like a house full of teenagers, not a country in its third century of democracy.

If it's true that there are 58,000 illegal immigrants in Charlotte, as reported in this magazine in April 2007, we'd better figure out what to do about it. I don't know what the answer is—I feel overwhelmed when I hear the stories; I feel angry, frustrated. We need to get busy enforcing the laws we have, or rewriting the ones that are unjust. What we have is precious, and it took immigrants to get it. Our story—America's story—is a story of people who were poor, or who were persecuted, and they came to find a better life. Our country is different from anyplace else on earth. As Ronald Reagan said in 1988, "Anybody from any corner of the world can come to America to live and become an American." America is an idea worth sharing—legally, thoughtfully, and with pride.
It's been almost four hundred years since English settlers gathered in a church in Jamestown to lay down the rule of law. Under orders from the Virginia Company, they met in 1619 to create laws "for the happy guiding and governing of the people." Their mandate was to create "just laws" and to form "one equal and uniform government." They believed that laws gave social order and made for "happy…governing." Years later, the framers of the Constitution held fast to the rule of law as the best antidote to tyranny. They gambled on the idea that people who made their own laws, and agreed to abide by them, had a significant chance at peace and prosperity. They envisioned a "pursuit of happiness" framed by law. In the centuries that lay ahead, the country would hammer out what it meant to create just laws—for the people, and by the people.

Five years have passed since Lelia and I met with Ruth Gorman. I recently tracked her down, and her story was the same. "I'm still waiting, Laurie. I pray to God that my time will come. I don't want to do anything illegally."

Laurie Prince's column runs on these pages every other month. E-mail: editor@charlottemagazine.com

This article appears in the June 2008 issue of Charlotte magazine.
Categories: Life Lines, Opinion, The Buzz
Contest of the Month