Not everyone moves here because they want to. These three families ended up in Charlotte through no choice of their own. They've each injected a little of their culture into the city, and Charlotte has returned the favor

Written by Tamela Rich, photographs by Nancy Pierce for Levine Museum of the New South 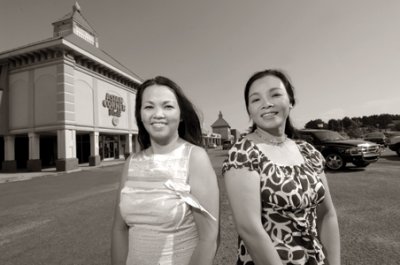 Driven from Vietnam, the Nguyens settled in Charlotte and created a marketplace for people from all over the world

Eastern Influence
Driven from Vietnam, the Nguyens settled in Charlotte and created a marketplace for people from all over the world

Ivy Nguyen remembers her father saying, "If we die, we die together in the ocean, but if we live, we'll be free together." That was 1979.
Ivy's father's near-monopoly fish sauce factory made him a wealthy man until the Vietnamese government confiscated it. He fled the country with his five children, wife, and two others in a tiny boat with an undersize motor. They intended to start their lives over again in the Philippines, some 1,000 miles away, but their boat was thrown off course in a thunderstorm and couldn't make it past Malaysian Borneo. Before the year was out, they were resettled by an aid organization in Charlotte.

Ivy said goodbye to her father last May, when he died of a massive stroke. Dan Nguyen lived long enough to see an extension of their family grocery business beat the odds in a near-forgotten neighborhood at the intersection of East Sugar Creek Road and North Tryon Street.

The Nguyen family took a big chance in buying 130,000 square feet of retail space some ten years ago, but it now houses sixteen businesses, including their own grocery store, International Supermarket. Inside Asian Corner Mall, proprietors from Vietnam, Laos, Cambodia, Thailand, China, India, Africa, and the Philippines operate beauty salons, restaurants, a tax preparation business, a jewelry store, a Vietnamese video store, a real estate and insurance brokerage, a Laotian music store, a Philippine gift shop, and other offerings.

"When we first came to North Tryon, people were afraid of crime and said we wouldn't succeed," says Ivy, who looks ten years younger than her thirty-eight years. But she says the only crime here is the occasional car break-in.

They recruited customers for their first grocery store, located on Central Avenue, by looking for Vietnamese surnames in the phone book and sending a letter with a coupon. Now the family grocery does business with customers from Greensboro, Troy, Albemarle, Hickory, High Point, and Columbia. This spring, three of the Nguyen sisters' husbands will open another store by the Tin Tin Chinese restaurant near Pineville.

Dan Nguyen once told his children, "Whatever you have, you have. Do good with it." He'd be proud.

Four-year-old Sofia Chambon-Ortega twirls and sings on the black-and-white marbled floor of the Rush Dickson atrium entrance to Carolinas Medical Center, where her mother, Jenny Ortega, works as a medical translator. Dressed in a pink dress and pink ballerina shoes, Sofia's dark, curly ponytails trail past her shoulders. Passersby smile at the happy child, whose gamboling provides an emotional respite from the pressing business that brought them to the hospital. Doctors and staffers greet her by name, and her mother's co-workers coo over her baby sister, Chloë, born in November.

Ortega's family came to North Carolina in 1991 to protect her younger brother from the draft in post-Iran-Contra Nicaragua. The family was granted political asylum and located in Gastonia, where Jenny finished high school before going to UNCC. She put her biology and Spanish degrees to use translating medical documents. Jenny's brother introduced her to the man who would become her husband, Xavier Chambon, a native of Lyon, France, who was getting his MBA at Winthrop. They live in north Charlotte, midway between her job in Charlotte and his in Mooresville. Xavier works as a financial forecaster for Lowe's corporate headquarters. All of which makes them the perfect tricultural New South family.

Ortega, thirty-five, laughs as she explains how Sofia taught her parents American Christmas culture through the songs she learned in a Methodist preschool. Sofia understands all three languages, but often responds to her mother in English although Ortega speaks to her in Spanish. Ortega smiles and strokes her daughter's head, saying, "I can hear her teachers in her accent." Ortega thinks Sofia will benefit from her multicultural upbringing. "She'll accept the differences in people more easily," she says. "She'll be more open minded."

Xavier, thirty, who also lived for a time in Algeria, learned English in Canada as an exchange student. He takes Sofia to ImaginOn and Discovery Place every Saturday, and they ride the LYNX to the Chick-fil-A on South Boulevard in between visits to the two cultural institutions. They think of Charlotte as a dynamic city. "Each European city has a single, unique personality," Ortega says, "but Charlotte's is a mosaic of sounds and colors."

Spice of Life
The Johnsons, driven from New Orleans by Hurricane Katrina, are spicing up life in Charlotte, one meal at a time

Martine Johnson's New Orleans accent is as sweet as her mango iced tea. "Theah ya go, sweetheart," she says to the elderly woman in a wheelchair, who needs the coffee pump closer to the edge of the counter so she can serve herself. "Be right wicha, sweetheart," she sings to another.

Martine, forty-one, and her husband, Lucius, thirty-seven, own and run Bite Your Tongue, a takeout and catering business, out of a nondescript medical office building near downtown. Bite Your Tongue got its start in New Orleans when Martine found space on her Magazine Street postal route renting for $250 a month. "We could sell lemonade and make the rent at that price," she says.

That is, until Katrina hit.

The couple packed three days of clothes and their two children into a van and headed to Huntersville to ride things out with friends. Then the levies broke.

With the help of Covenant Presbyterian Church, which sponsored their resettlement in Charlotte, the couple restarted the business on a shoestring. Drew Henderson, an associate pastor at the church, loved their corn and crab soup and e-mailed his friends about it. Before long the Johnsons were selling white-chocolate pudding and other New Orleans delicacies from the back of an aged Honda. When they decided upon their current location, the church backed them with money and a lot of word-of-mouth advertising.

The Johnsons good-naturedly say Charlotteans suffer the misconception that all New Orleans food is spicy; they prefer calling it "well seasoned." They say that where Charlotteans might use four onions, they'll use six, plus lots of fresh herbs. "They weren't having that spicy food," Martine says. But Charlotteans do like andouille sausage in the red beans.

Only a few years after starting over, the Johnsons have big plans, including a cookbook and possible franchising. They bought the local rights to distribute Community Coffee, a famous New Orleans blend with chicory, the roasted root of endive plant that produces a heavy-bodied brew. It's just one more way they're adding seasoning to Charlotte.

This article appears in the March 2009 issue of Charlotte magazine.
Categories: Feature
Contest of the Month