It's not just for Canadians anymore

STEVE MCKEE is preparing to throw a rock at his wife.

The “rock” is a 38-pound granite curling stone. The “throw” requires Steve to propel himself down the ice with a fencer-like lunge, then gently release the rock to slide it toward his wife, Carol, who is standing at the opposite end of a 150-foot ice rink.

Maybe you know curling as the obscure sport that makes you change the channel during the Winter Olympics, but it has been played in the United States longer than baseball, football, or basketball. Originally imported from Scotland, it took root in Canada and the northern United States in the early 19th century. And now it’s taking hold in Charlotte, where the Charlotte Curling Association has grown from just 40 members in 2010 to 140 in 2015.

The main reason for the dramatic growth of the club is its new facility, which opened in November 2014. It’s a world-class, $1.8 million ice rink that 2006 Olympic gold-medal curler Jamie Korab praised when he visited it in January. Curling leagues play at the club nearly every day of the week, and it also hosts curling tournaments known as “bonspiels.” You might have seen the club’s seal—a hornet holding a broom—on some Charlotteans’ hoodies. It looks like the logo of a very aggressive janitors’ union.

As it grows, CCA has drawn a diverse membership, including South Koreans, French Québécois, and other Canadian transplants who grew up in a country that reveres curlers the way America reveres NFL players. “I learned to ice-skate, then I learned to curl,” says Jeremy Hozjan, originally of Saskatchewan, Canada, and now a member of the Charlotte Curling Association.

People fall. But in typical curling fashion, a fall is material for jokes, not frustration. “If you could take all the falls, splice them all together, and set them to music, it would be amazing,” says Dawn Hozjan.

He came to Charlotte to play guitar in a band. “My group played a lot of rock, hard rock,” he says. When I note that curling seems too relaxed a sport for a metalhead, Hozjan shakes his head. “This sport takes finesse,” he says. “It takes…SWEEEEEP!” 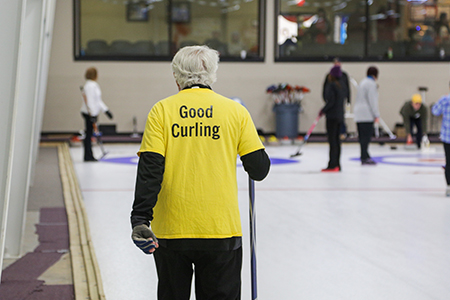 Curling attracts people of many ages. The player with the second-highest score in April was 73.

He’s bellowing this command to another player. Brenda, a curling newbie wearing a purple, tasseled hat, is feverishly using a plastic-handled broom to sweep the ice in front of the rock. Hozjan continues. “It takes skill. In other sports, it’s about strength or stamina; in curling it’s all about finesse.”

Curling is like playing pool on ice, using one’s body as the pool cue. But players don’t wear ice skates; instead, they attach a frictionless pad to the bottom of one shoe and use the other foot to push forward. They propel themselves off a backstop—or “hack”—with the curling stone held at arm’s length in front of them. Two teams of four take turns throwing eight curling stones each down the ice, trying to land them as close as possible to the center of the “house”—a target in the ice. One player slides the rock down the ice, while the sweepers glide next to the stone, sweeping in front of it to help it slide faster and straighter. The art of sweeping properly—aiming the rocks just right and placing them strategically to block or dislodge opponents’—is complicated, and the sport has developed its own language.

Hit and roll! Board right! A little less ice! All the way!

Sweeping takes concentration, as players scurry down the ice, hopping over rocks in their way, trying to gauge the speed of the rock, and listening for commands yelled by the “skip,” or team captain.

People fall. But in typical curling fashion, a fall is material for jokes, not frustration. “If you could take all the falls, splice them all together, and set them to music, it would be amazing,” says Dawn Hozjan, Jeremy’s wife.

Jeremy and Dawn can play together because curling clubs are often coed. Also, in curling, age isn’t really a factor: The player with the second-highest score in April was 73 years old. There are no rules about who can or can’t play. Cassidy Hooper, who was born without eyes or a nose, has been a member of the Curling Association for three years and hopes to start a curling league for visually impaired athletes.

McKee, the association’s president, says the group plans to start a wheelchair league in the fall. He already has the equipment—the club’s new facility, just south of Northlake Mall on Old Statesville Road, was built with a mechanized wheelchair lift to lower players to the ice. There is no sweeping in wheelchair curling, and players throw rocks from a stationary chair (a friend can help hold the chair steady.)

The curling community is amiable and welcoming; in short, it’s very Canadian. After every match, players “broomstack.” The winners buy the losers a drink, and they chat about the game. As McKee explains, “The social element is just as important to the sport as the game itself.”

This article appears in the October 2015 issue of Charlotte magazine.
Categories: In Print, The Buzz