From tapas to Italian to Low Country, then back to tapas, and, yes, even a steak house, these are the top new places at which to eat 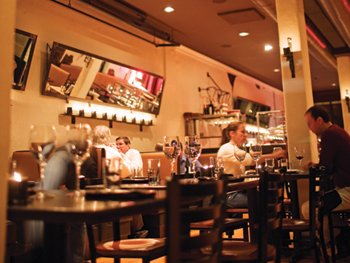 With entrees at $20 or under, and forty wines under $40, you can't go wrong at Customshop. (Chris Edwards)

From time to time, it's fun to allow oneself to be seduced by well-prepared and well-presented food. At Customshop, seduced you will be by the randy presentations of the David Pasternack/Trey Wilson culinary combo. The land-based offerings need a little work, but the seafood dishes are worth the trip alone. Like dayboat halibut ceviche with grapefruit and jalepeños drizzled with pure olive oil. Or crunchy and delicious soft-shell crab—lightly breaded and pan fried, served with Vidalia onions. (The menu changes seasonally.) Both are vivid examples of the kitchen's considerable imagination. It's also one of the more funky and hip designs in the city. Raw iron accents abound, and custom glass cases house cured meats and platters of appetizingly fresh vegetables.

Nice Touch
Entrées are $20 and under, and there are forty wines under $40 a bottle.

This article appears in the December 2007 issue of Charlotte magazine.
Categories: Feature, Food + Drink, Restaurants & Food
Contest of the Month