“Something like this gives people the opportunity to slow down and think about information in a different way.”

Throughout Greta Gerwig’s 2019 adaptation of Little Women, protagonist Jo March works on her writing. She moves from inspiration through drafts to revisions to selling. Toward the end of the film, we watch as a book is meticulously constructed: the leather cover cut and adhered, the pages folded and stitched together, and each letter of type set by hand. A book, the movie makes plain, is crafted in more ways than one.

Davidson College professor Andrew Rippeon researches the materiality of information, the place where these crafts meet. Sunlight streams through the tall windows of the Davidson College Letterpress Lab, which Rippeon runs, on a Tuesday in late January. Cabinets of type crowd the room, and two mid-20th century letterpresses—which Rippeon, a visiting assistant writing professor, brought with him to Davidson—sit under the windows. The walls are a collage of prints: an event poster, a Valentine’s Day poem, an appeal to vote—experiments in form and color. An Art 201 class gathers in the hall outside. Students have selected phrases from Matthew Kirkpatrick’s novel The Ambrose J. and Vivian T. Seagrave Museum of 20th Century American Art. Today, they’ll set the phrases in type.

Rippeon came to Davidson in 2018 from Hamilton College in New York state, where he also founded a letterpress and book arts lab and discovered one of the two letterpresses in a basement. He came to letterpress printing by way of literature, after he published an avant-garde literary magazine with a letterpress-printed cover in graduate school. Since then, he’s found that printing exists at the crossroads of many other fields. It was “interdisciplinary” long before the term became an academic buzzword.

Printing involves math and chemistry. He’s learned from art students to be bold with color. He works with students of writing, studio art, graphic design, and STEM. Last semester, he did a workshop with an entomologist: Iron gall ink, an enduring form, is derived from oak galls, where a wasp has laid an egg on an oak branch. 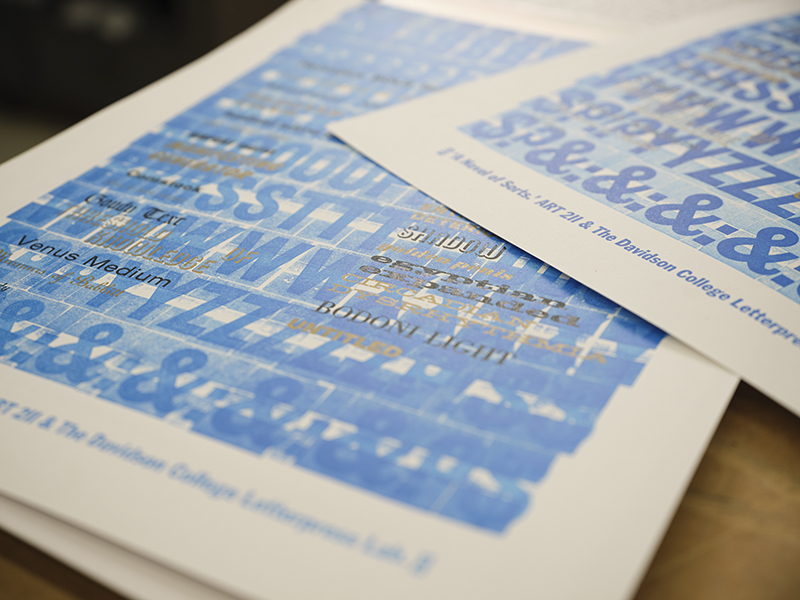 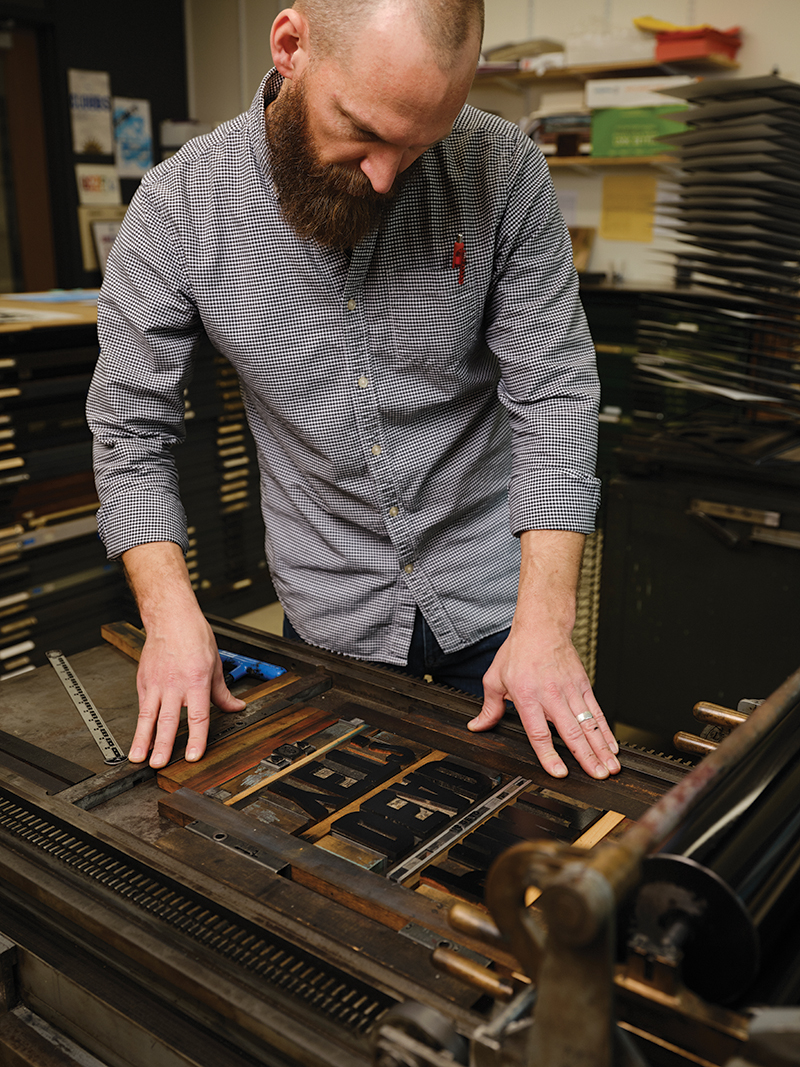 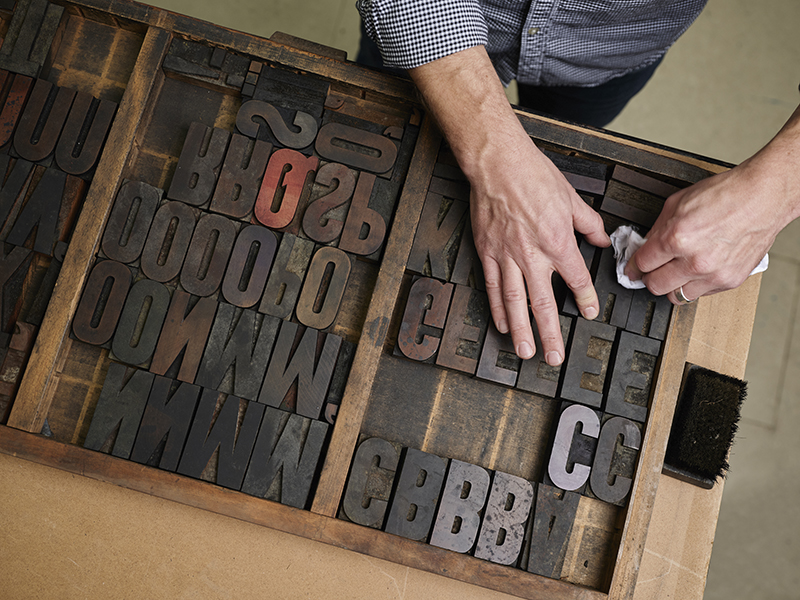 Rippeon prepares letters for printing and cleans them afterward (above). Photographs by Rusty Williams.

The art students circle the cabinets in the lab as Rippeon warns them not to touch the type, which contains lead, then touch their mouths. He explains how the letters are laid out in the type cases and demonstrates how to arrange their characters, or “sorts,” in their composing sticks, so their phrases will come out right-side up on paper. He mentions that capital letters used to be stored in the printer’s upper case, hence “uppercase” and “lowercase.” In digital design programs like Photoshop, the distance between lines of type is called “leading”; Rippeon shows the class the namesake pieces of lead. He gives them a tour of the typefaces he has set up, then lets them peruse and choose a favorite.

“This is media, even though we’re used to saying that the digital is media. I want them to always be aware of themselves as active participants, if not creators, in that process and not purely recipients and not purely passive sponges of information,” Rippeon says. “Something like this gives people the opportunity to slow down and think about information in a different way.”

In the Letterpress Lab, students gain a new way to perceive information—more tactile and sensual. Olivia Conley, a senior studio art minor, has chosen Hellenic Wide type and carefully sets her phrase (“circadian dysrhythmia”) in her composing stick. “I don’t know where I would have found an opportunity like this outside of school,” she says. She occasionally checks that she’s doing everything right with Richard Farrell, a studio art major who works at the tray next to her. He’s setting his phrase (“family of rats”) in Egyptian Expanded type. “Since we’re doing digital art,” he says, “it’s really interesting to see the real, physical side of it—especially when it’s very much a throwback. Trying to incorporate that into a digital art piece will be really interesting.” When they’re happy with the way their letters look, packed tight in their composing sticks, they set them by the sink.

To Rippeon, there’s a luxury in holding the type and feeling the texture of printed images. As he talks, he moves around the room, picking up prints to illustrate his ideas. He flips over a small print to show me where the type has pushed through the paper to create an impression on the reverse side. That’s called a “bite.” When the press leaves no impression, it’s known as a “kiss.”

“To be reminded that it’s that three-dimensional object that exists in space. It’s not on the screen; it doesn’t disappear when you scroll up. You can’t email it to somebody,” he says. “That’s not a nostalgic thing—I think that’s a way of remembering that we’re embodied.”

The class members gather around the press as Rippeon shows them how to distribute ink and fasten paper to the roller. The students take turns tentatively opening and closing the press, wheeling the paper across a galley tray of type to make a background for their prints. They walk along the press as they turn the roller, arms in motion, and some comment on the muscle it takes. There’s a satisfying thunk as the press fully opens and closes. Sometimes the thunk is a little too hard, and Rippeon reminds them to “remember where the press stops and starts.” When they pause to re-ink, the professor draws attention to the sound. There’s a hissing, a little like sizzling bacon. “That’s the ink,” he says, “adhering to itself and releasing.” The students lean in and listen.

Allison Braden is a writer, translator, and contributing editor for this magazine.