Shelley Reilley was a single mother of two living in Florida when she learned her son Parker, then eighteen months old, was autistic. She soon realized her older son Dakota, then seven, had a milder form of autism. After moving to Charlotte in 2003, she started the Parker Autism Foundation to help families of children with autism. This summer, the foundation will sponsor a two-week camp called Camp Dakota for twelve kids. They hope to expand the camp to serve at least twenty-four kids for six weeks next year. Reilley lives with Parker, now seven, and Dakota, now thirteen, and her mother in northeast Charlotte. She recently told her story to writer Jen Pilla Taylor. 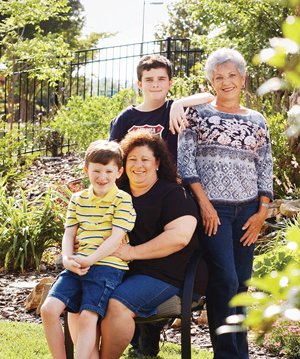 Parker, a rare autistic savant, can name any country on a blank map but needs dozens of hours of therapy each week.

Parker was born five and a half weeks early and he had problems medically from day one. He had premature circulatory, respiratory, and nervous systems, so for like seven days I couldn't even touch him.

Now that I look back, there were warning signs from birth. He would bounce in his bouncy seat for hours, to the point where he would get blisters on his feet. But if we took him out of the bouncy seat he would scream and cry and throw a fit. So we would put pillows underneath him so he could bounce on the pillows, and that's how he slept. He was an extremely good baby, to the point where I should have known something was wrong. When he was six months old and sitting up, he would spin things for long periods of time. If he had a toy, he wouldn't play with it, he would turn it upside down to see how it worked.

At about nine months he started saying a few words: mom, dog, duck. But by twelve months, he had completely stopped talking. So I started getting concerned about his speech. I asked the pediatrician about it and of course the pediatrician shrugged it off: "oh it's no big deal." Then at fourteen months I said something again to her. And she said we need to wait until he's eighteen months or two years. At sixteen months he had stopped even babbling. He had no sounds, basically, at all. At that point I was very demanding: I want him evaluated.

We got him evaluated on a Monday, and Parker walked out of the evaluation with three hours of speech, two hours of occupational therapy, two hours of physical therapy, and special instruction every week. So I was a little overwhelmed, but I thought, well, if that's what he needs it's good he's going to get it. So I got him packed up and there were like five therapists standing there waving goodbye and—I have no idea why—but I turned around and I said, "Oh I'm so glad we can rule out autism." They all five stood there and stared at me. It was probably five seconds, but it felt like forever, and one of them said, "Well, he's really too young to rule out anything."

I immediately knew he was autistic. My heart sunk. So on the way home I went and bought every book there was in the bookstore on autism—which wasn't many at that point—maybe three or four. So my mom and I were reading the books and as we were reading she looked at me and said, "You have two children with autism." And I said, "Yes, I do."

A lot of issues that Dakota had started making sense. He had impulsivity problems, he was extremely literal, he didn't know how to relate. Every sign was there.

I took a few days to just sob, but then by Friday I had decided I needed to find out everything there was to know about autism. Within weeks, by the time he was nineteen months old, Parker was in forty-four hours of therapy a week. My mother agreed to come out of retirement and go back to work so that I could stay home and she could support us. We sold the house and bought a smaller house. Any savings we had, we used. We just did what we had to do. Over a period of three and a half years, we probably spent $275,000, all out of pocket.

Parker is what they call an autistic savant. We saw a specialist in Wisconsin and he said there have only been a hundred children in the last one hundred years like Parker. When he was twenty months old, we realized he was reading. You can give him a blank globe and he can pretty much tell you where anything is. For a long time, his thing was the presidents: when they got elected, what their birthdays were. He learned all of those.

He's doing wonderfully. When he was first diagnosed they said he was profoundly autistic and he is now moderately autistic, which is huge. They said by the time he was ten he would probably be institutionalized, that I wouldn't be able to handle him. Now we know that won't happen.

Parker has no concept that he's different. To Parker, Parker is normal. But Dakota is so high functioning, he wants to have friends. Someone calls him a name and it hits him straight to the heart. He wants to be typical but he doesn't know how. It's much harder as a mother to watch your child go through all of that pain. He has a very, very hard life.

As a mother, what I would love to see happen is that Dakota and Parker would grow up and one day have a house together. Dakota would kind of watch over Parker while somebody would come in and check up on them periodically. Parker might have to have somebody there all the time with him. But my little dream is that, when I'm gone, they're still together.

My kids are blessed to have a grandmother that could help. There are so many families out there that can't even afford to send their child to camp for a week to get a break. Insurance doesn't pay for anything, generally, because they still diagnose autism as a mental disorder and not a neurological disorder. So, a lot of parents are spending so much on therapies, they don't have money for camp. They don't have money to go to a conference to find out how to help their child. That's why we started the Parker Autism Foundation.

Do I hope one day there's a cure? Absolutely. Do I think they are moving in a great direction? Absolutely. They're finding the genetic links. They're making great strides to find a solution. But I don't think that I'll see a cure in my lifetime.

For more information on the Parker Autism Foundation, go to www.parkerautismfoundation.org.

This article appears in the July 2008 issue of Charlotte magazine.