Karen and Dan Fairley's oldest son, Jack, was two when he developed diabetes and ended up in CMC's intensive care unit. It was a diagnosis that would alter their lives forever. Dan Fairley recently spoke to writer Jen Pilla Taylor about how, in the course of four years, they went from being bewildered parents to educated advocates for Jack, who just finished kindergarten. 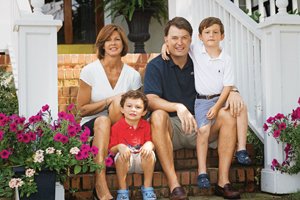 Karen and Dan Fairley with their sons Smith (left) and Jack (right). Jack was diagnosed with Type 1 diabetes at age two.

It was October 2004—Jack was two months shy of his third birthday—and he just wasn't feeling well. It was almost like he had the flu. And I remember he was drinking an amazing amount of water for a little kid. So we took him over to the pediatrician and we said, "Something's just not quite right. Could you take a look at him?"

So the doctor took a look and then they kept us there for a while, and we didn't know whether we should be alarmed. Then they did a blood sugar test, and his blood sugar level was roughly four times what it should be. It was right around 440. A healthy blood sugar level is between 80 and 120.

The first thing out of their mouths was "possible juvenile diabetes," as opposed to type 1, which is the same thing. But I—like a lot of people, it turns out—thought juvenile diabetes was something kids get and then they just grow out of it. Almost like gestational diabetes that a woman might just get while she's pregnant, and then it goes away. But then I learned otherwise: this was something he was going to be living with for the rest of his life.

When we got to the ICU it was very scary. You go from having a healthy kid one day to all of sudden your child is surrounded by all this metal and you're holding his hand in the ICU. It's devastating.

They spent the first couple of days just trying to get his blood sugar down. Then it was another two or three days of education. They taught us what we needed to know going forward and then they sent us home. Meanwhile we were just completely overwhelmed.

Two months later, Jack got sick—he just had the flu, basically. And we were trying to treat his blood sugar, and we weren't doing a very good job, but we didn't know that at the time. And he crashed on us. He was hypoglycemic. He began having seizures. Luckily, he was fine, but it was an awakening for us. We knew we had to make some major changes.

We needed more flexibility in our jobs. It was a lifestyle change, to get our priorities back where they needed to be.

It was probably a good year and a half before we felt like we really had a handle on things. We check his blood sugar level probably eight times a day now. Every morning when he wakes up, every night before bed, before every meal and then a few other times, depending on what's going on in his life. If he's sick, it can be twelve, fifteen times a day. On days where he's running perfectly it could be maybe six times. We have probably six or seven of these glucometers — we carry one in each car.

We're always trying to reach that 80 to 120 number. We call it "chasing the number." Still, even with how educated we've become, it's a lot of guesswork. If he's sick, or maybe he's exercised a lot, we have to take all that into the equation to figure out how much insulin he needs.

Diabetes, if it goes unchecked, can have some very serious repercussions — cardiovascular disease, blindness, amputation. But it can be managed, and we feel lucky for that. When Jack was in intensive care there were kids there who had cancer and other potentially fatal ailments. We can have every expectation that Jack will live a long and successful life, with diabetes, until a cure is found.