Since news broke that Charlotte had landed the DNC, much of the city has been obsessed with how it’s been depicted in the national media. In case you haven’t been following along, here is a curated selection of Charlotte-centric sound bites —J. H.

FLOTUS Ignites BBQ Firestorm
“Vibrant, diverse, and full of opportunity, the Queen City is home to innovative, hardworking folks with big hearts and open minds. And of course, great barbecue.”—First Lady Michelle Obama in her announcement February 1, 2011, that Charlotte had beat out finalists Cleveland, Minneapolis, and St. Louis to host the 2012 DNC.

Company’s Coming
“The city is touting improvements to transit, education, the business climate, and quality of life, and it’s already working. Some old stalled projects have started up again, and new ones are appearing.” —CNN’s Tom Foreman in a May 12, 2011, video report titled “Why the DNC is good for Charlotte.”

So Top 10 Isn’t Good?
“North Carolina is an odd choice for Democrats: its laws are unfriendly to union labor, one of the party’s most important constituencies, and Gov. Bev Perdue is one of the country’s most unpopular Democratic executives.” —Politico, ranking the Democrats’ decision to hold their convention in Charlotte as one of the “Top ten political blunders of 2011.” 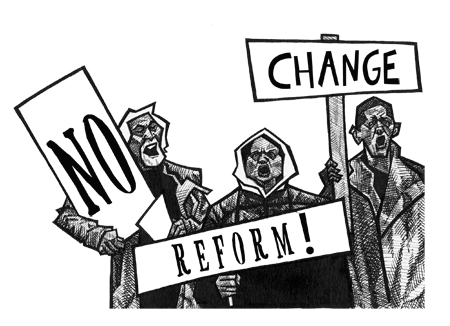 After sealing off the parade route, city officials held a lottery to assign time slots for speaking and demonstrating. This was met with even more ridicule. Activists decided to get creative when signing up for the lottery. The highlights:

It Takes a Pillage
Right to Demonstrate Wherever I Want
The Superscoots Spectacular One-Woman Parade
The Importance of Radical Cheerleading in a Dull, Boring World

Banking on It
“The Democratic National Convention Committee also announced that Mr. Obama would again [accept] the Democratic Party’s nomination in an open-air sports arena … again risking rain in favor of drama and the chance to recruit new volunteers. There’s one other wrinkle … given that it’s named for Bank of America, whose reputation has been tarnished due to practices under its Countrywide mortgage unit.” —The Wall Street Journal reporter Laura Meckler in a January 17, 2012, blog post.

Memo-gate
“Among the details that the city of Charlotte thought were worth keeping secret about the upcoming Democratic National Convention: what color to paint a new police command center, the location of fire and building inspectors at Time Warner Cable Arena, and a squabble between police and federal authorities over when to hold a meeting.” —The Charlotte Observer, March 28, 2012, after the city released some info in emails it had previously redacted.

Looking Forward
“Although this convention will be wrapping up in 100 days, its legacy will be our efforts to improve ourselves and our community for generations.” —Mayor Anthony Foxx at a May 29, 2012, DNC press conference.

Putting Party First
“Don’t Worry, Everyone: There Will Be Enough Alcohol at the Democratic National Convention.” —Headline on June 16, 2012, New York magazine blog post about a bill to allow ABC stores in Mecklenburg County to open on Labor Day.

Dubious Advice
“The Billy Graham Library. There’s all sorts of reading material here but I’d suggest Billy Graham’s biography, or Billy Graham’s Theology 101. If you want to impress Republicans, bust out some Billy Graham.” —From a July 27 article in The New York Times. The quote comes from local immigration lawyer Tin Thanh Nguyen.

Interstate 485 is the Anakin Skywalker of Highways

Why Was This WWII Bomber Circling My House?