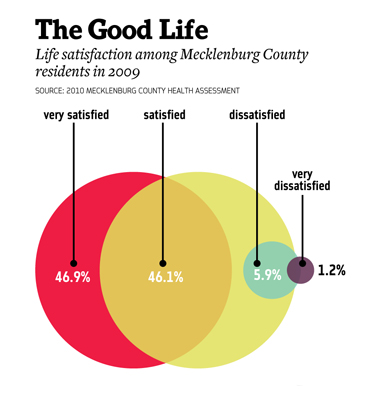 20 Number of Mecklenburg County teens who died from suicide between 2000 and 2008. 75% of the those were male. Suicide is the third leading cause of death among teens, both locally and nationally.
Source: Mecklenburg County Health Assessment

1 in 10 Number of adults who suffer from depression
Source: Centers for Disease Control and Prevention

The grade the National Health Alliance on Mental Illness gave North Carolina in 2009 for our mental health system, largely due to a lack of accessibility. The report card cited a lack of education and outreach programs, and not enough outpatient treatment options fo rpeople on Medicaid or Medicare, or the uninsured. The most depressing part? America as a whole got a D, too.

Does depression tend to be caused by genetic factors or environmental ones? They’ve found that it can be caused by both of those. There is a genetic inheritance, so if some- one in your family has trouble with it, it’s more likely that someone else in the family will have it. But even people without a family history get depressed. It’s generally a combination of genetic factors and environmental situations. You’ll have a predisposition, and then something will trigger it.

Has the economy affected the amount of patients you see, or their progression? Some of the things that may have been options in the past are not an option now. Some people would consider selling their homes to move closer to family, but you can’t sell your house now. One thing we do see is people who, when we suggest therapy or medication, say they can’t afford it, because they don’t have insurance coverage.

Depressed or Just Down?

Everyone has a humdrum day every now and then, but doctors use time as a depression tip-off. if you’ve had one or more of the fol- lowing symptoms for weeks at a time, it might be time to check in with a doc.

In the past 12 months, 20% of CMS Middle Schoolers and 13.9% of CMS High Schoolers seriously thought about suicide