The bright yellow sign with red lettering has been a fixture on Central Avenue for years, inviting passersby to come inside the nondescript building and enjoy some dim sum. For 21 years, Dim Sum served up small plates and steamer baskets full of dumplings, buns, and other bite-sized fare. They also had an extensive menu of large plates—stir fries, noodles, and hot pot dishes.

Now, a black and white sign on the door stops hungry diners in their tracks, informing them that the Plaza-Midwood landmark has closed as of Monday, March 13. According to the sign, the owner of Dim Sum will not renew the contract for the restaurant's lease. 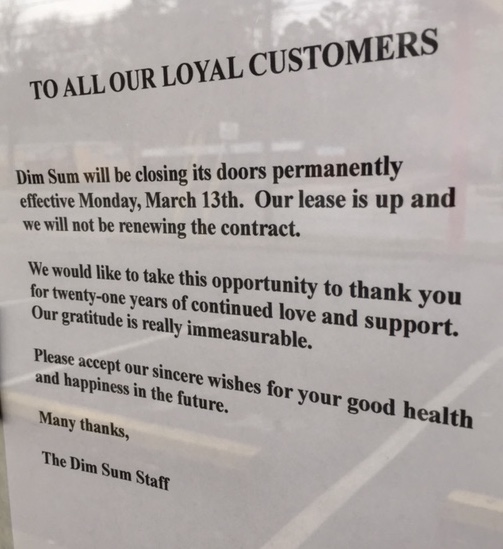 Owner Yee Kam opened Dim Sum in 1996 with several cooks who had learned their craft in Hong Kong. Yee is a native of Hong Kong, and so Dim Sum specialized in Cantonese cuisine, which comes from the nearby Guangdong province. The restaurant had recently undergone a renovation that gave the interior a more modern look.

The market next door appears to still be open—at least for the time being. Attempts to contact the market and Yee for this story were unsuccessful.

At Dim Sum, the more adventurous could enjoy dishes such as jellyfish and chicken feet in black bean sauce, while the casual Chinese food connoisseur could dine at the same table with something more approachable, such as chow fun noodles. At Dim Sum, Charlotte diners could get a primer on just how many Chinese dumplings there are—from the type of wrapper to the preparation to the filling inside.

"Dim sum was one of the first restaurants that I went to when I first moved to the the states; I was 13 years old at the time," says Bryan Li, owner of Pisces restaurant in Midtown. His first visit to Dim Sum was in 1999. "It has always been special to me because it reminded me of home (I'm from Hong Kong). My family had countless of meals there, my girlfriend and I had one of our first dates there. It is sad to see Dim Sum closing its doors; [it] has been a huge landmark of that neighborhood and I'm thankful for everything it has given us over the years."

While not necessarily on par with some of the celebrated dim sum restaurants in San Francisco or New York, Dim Sum definitely offered Charlotte diners something other than standard Southern fare or steaks and burgers. The restaurant's closure leaves a sizable culinary hole for a city of nearly 1 million; those who crave dim sum can look to Dragon Court, run by one of the former owners of Dim Sum, or chase The Dumpling Lady down in her food truck. The cafeterias inside Super G and Grand Asia supermarkets are another—though limited—option.

Dim Sum's kitchen made a lot of things by hand, one of the factors that influenced Yee Kam's decision to close the restaurant. Her core staff is at retiring age, and finding replacements that were willing to do the hard work in the kitchen was proving challenging. "We do everything by hand. It's too much work; you have to love what you're doing," says Yee.

The lease contract expiring in April seemed like the right time for her to pivot. "I've been doing this for 21 years; that's good enough," she says about the restaurant. Yee had also been pursuing another business venture for several years, but was waiting what for the right location to become available. Having now found the right space, she'll be opening a high-end nail bar in the Park Road Courtyard shopping center on the Park Road extension, near Anna's Alterations. The nail salon, which will be called "The Nail Bar," is slated to open sometime in June or July.

"Tell the customers if they miss me to come see me over there, okay?" says Yee.

This article appears in the March 2017 issue of Charlotte magazine.
Categories: Food + Drink