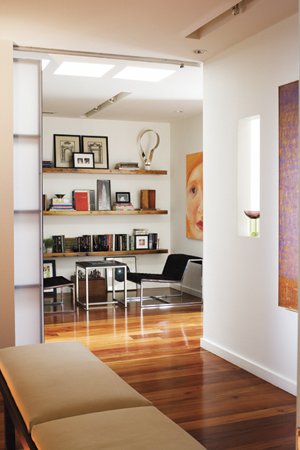 Living in a box on stilts may sound like a vacation in Bora Bora, but for Hall and Paige Johnston, it was an idea that uprooted them from the suburbs to their own urban tower. Hall, an architect turned developer, and Paige, a fashion-savvy redhead with her own women’s boutique, decided to ditch their classy Wendover Road home for something daring. Enough with the big yard and the weekends with lawn bags. Sure, they’d miss the spectacular canopy of trees on their street, but how about a rooftop veranda with big slouchy sofas and plants that live in pots?

"We had an underutilized asset out there," Hall says, regarding uptown property his company bought years earlier. "The long-term plan was for a high rise." The company planned to sit on the investment while it appreciated. The big lot—almost a quarter of an acre—was right on North Tryon Street, only blocks from the main intersection of Trade and Tryon. It included a 1950s restaurant that had been damaged in a fire. Why not restore it and build over it? They could leave the diner at ground level and build an apartment on top. It was too good to pass up.

Influenced by twentieth-century architect Le Corbusier, Hall spent more than three years working out the architectural plans with friend John Burgess, a Davidson architect. He wanted something industrial and modern, as minimalist as possible. Normal constraints didn’t exist. "It was an opportunity to live in a space that I didn’t have to design for resale value," says Hall. "It could be as fun and unique as possible." Knowing it would be torn down when the land was sold, Hall kicked out the stops.

The plan they settled on was a four-story home that would straddle the coffee shop on a freestanding steel frame. Three stories were above the diner; behind it, the building connected to ground level via a circulation tower. "The structural engineer said you couldn’t do that," Hall recalls. The technical aspects were daunting. The building would be clad in polycarbonate with plenty of windows and natural light. "A lot of the house was designed to be semitransparent," Hall explains. Interior doors had windows to pull light through the house. "I wanted a visual relationship between one space and the next. The doors allow light to pass through. We put skylights in the top to allow as much light as possible."

Getting permits from the county topped the list of challenges. "The county really didn’t understand the building," he says of the complex design. It wasn’t a townhome or a house; it was mixed use, and the materials varied depending on the level. "It’s Type V construction over Type II construction," he says of the upper levels with wood frames and the lower ones of steel and concrete. The Johnstons hired Cox & Schepp to construct the house, which took a year to build. Finally in 2006, they moved in with their young daughter.

From a private drive off Tryon, a security gate opens to a tree-bordered parking lot with ten parking spaces, a two-car garage, a welding shop, and a dog run. Hidden from the street, a hotel-like entry features low steps and a red wall; a vertical niche holds a marble sculpture. Inside, pebble paving, windows, and a soaring brick wall enclose a three-story staircase. One can see to the top, through the open steps made from lumber from a McAdenville textile mill. Hall, who likes to do metal work in his spare time, built the cable railing for the stairs.

"I tried to design the house as environmentally conscious as we could," he says of the reclaimed lumber, water-saving toilets, and roof floor tiles of recycled tires. Concrete counters from artisans at Reaching Quiet incorporate organic elements, including geodes and shells. There’s even a fossilized snakeskin imprint in the surface of a lighted niche in the entrance hall to the master suite.

The home’s floor plan is flip-flopped. "The actual family floors are below and the living area is the top floor," explains Paige, "so as you go up in the home you become more public. The public spaces are elevated, to catch the view." An exterior staircase, accessed from the music room of a window-clad salon, leads to the fourth story, a two-level rooftop terrace. Paige designed most of the interior, occasionally calling on Missy Luczak at Meyer Greeson Paullin Benson for resources. Her carefully edited interiors are given dimension with spare jolts of luxe fabrics. A red Italian rug in the master bedroom is made of layers of felt circles; in the bathroom, pale squares of pony hide are stitched together in a soft mosaic.

So far, it’s been so good. Hall’s biggest adjustment? "Not having to cut the grass. The time I used to use working in the yard is freed up to do other things. My daughter and I love to ride our bikes uptown, especially on the new light rail path," he says. "I can walk out my door and go get a beer and a steak, or my daughter and I can walk out and go to a Bobcats game."

Up on the roof, under a canopy that shelters white sofas and a coffee table of charcoal and lime blocks, tall grasses rustle in dark planters. A long metal trough hangs on a waist-high wall, holding a garden row of succulents in paint-card greens. Past the American flag flapping in the wind, the broad rooftop is big enough to practice throwing a ball. There’s no lawn to mow or shrubs to prune. And the plants are all in pots.

This article appears in the Home & Garden July 2008 issue of Home + Garden.
Categories: Home & GardenFeature, Spaces
Contest of the Month