While other twelve year olds were playing four square and Nintendo, Geoffrey Lamb was about to sell homes. Lots of them 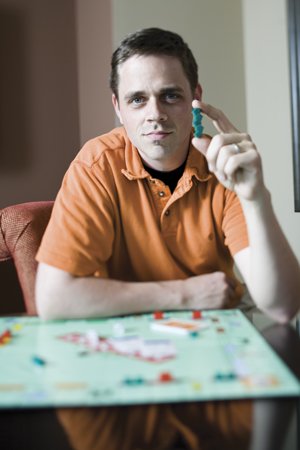 At the age of twelve, while watching television in the living room of his family's rented townhome, Geoffrey Lamb found his calling.
In real estate, an infomercial explained, there was a vast fortune to be made, but only by the people who knew how to buy and sell it the right way. At an upcoming seminar in a local hotel conference room, that way would be revealed.

Geoffrey didn't want the next hot toy or the newest sugary cereal. No, he wanted to be at this seminar. So young Geoffrey dragged his mother—a Charlotte public school teacher and single mom—to the seminar, where he talked her into putting $400 on her credit card so that he too could know the secrets of real estate investing.

What he learned there didn't make him rich, but it set him on the path toward becoming—almost two decades later—the region's reigning king of real estate short sales. At a time when the country is seeing a surge in the number of mortgage payment delinquencies, he has built a team of about a twenty people who help him make these tricky transactions work, thereby saving struggling homeowners from foreclosure while earning his company a nice commission.

"I would love to say I saw this coming, but I didn't," Lamb, now thirty-one, says of the economic crisis. "I was at the right place at the right time with the right idea."

In a typical short-sale scenario, the homeowner is a few months behind on his mortgage payments and has little hope of catching up, so the lender allows the owner to sell his house for less than what he owes on the mortgage. Through a short sale (also known as a pre-foreclosure), the lender avoids the expensive foreclosure process and the seller can come away with less damage to his credit record than he would if the house went into foreclosure.

Lamb has only been specializing in representing short sellers since 2007, having spent many years investing in real estate on his own. At sixteen, he convinced his mother to buy her first home—a foreclosure property he found along the train tracks in Concord with three bedrooms and just 1,100 square feet of living space—for about $75,000. At eighteen, with no money down, he bought his own house, a manufactured home he now says he paid too much for.

"I've made plenty of mistakes along the way," says Lamb, "but that really is how you learn in real estate."

After graduating with a master's degree in business administration from Winthrop University in 2002, he made real estate investing his full-time job, at one point managing about a dozen of his own rental properties. He became a Realtor in 2003, mostly representing investor buyers.

Veteran Realtor Andrew Ferraro, who worked with Lamb at Century 21 when he first started out, recalls that Lamb was interested in Internet marketing before many Realtors, and he developed the office's Web site.

"He was a whiz at that," says Ferraro. "He was the kind of kid who you could throw any project at and know he would make something out of it."

Several years ago, Lamb decided to focus on being a listing agent—working mostly for sellers. He affiliated with RE/MAX Gold Realty and formed the Lamb Group, which operates out of two rooms crammed with desks in a newly minted brick office building on the Kannapolis side of Concord.

As the real estate market has plummeted, Lamb's number of short sale listings has soared from four or five in mid-2007 to nearly 120 today, and he picks up one to three more each day. He also has about thirty traditional for-sale listings.

In 2008, the Lamb Group completed seventy real estate deals, an astonishing number given that the average broker completes just ten annually, according to the most recent numbers available from the National Association of Realtors. And short sales can be very complex transactions—so notoriously difficult that most Realtors don't feel it's worth the 4 percent to 6 percent commission usually paid by the bank.

Realtor Jaclyn Erwin, who also specializes in short sales, says Lamb's numbers are impressive. "A typical file for a single short sale can be 200 pages long—there's a lot of documentation involved," she says. "To push that many transactions through he has to be very on point, very organized. He has to have a system."

Using principles he learned in a McDonald's management trainee program as well as after researching and talking with lenders, Lamb developed a multistep process for his corporate structure. With the efficiency of a fast-food crew putting together a Happy Meal, they know how to work within the bureaucracy of the lender to complete a short sale.

"It took some trial and error at first to get things right," says Rachel Harris, Lamb's director of operations. "But now we are a well-oiled machine."

Now, Lamb says, he's readying for a new real estate challenge. He looks twelve to eighteen months into the future
and sees a market recovery, so the boy with the foreclosure-by-the-train-tracks background is seeking a more prestigious niche: luxury properties.

It seems an unlikely turn for Lamb, who lacks the accoutrements of so many big-deal Realtors. The home he shares with his wife, two stepdaughters, and son in a new Concord subdivision is several rungs above his first pre-fab purchase, but it's hardly a showplace. He drives the five miles between there and his office not in a shiny Lexus or Mercedes, but in a dusty 2004 Chevy Trailblazer.
But Lamb is pursuing his new path with the tenacity of a twelve year old who has just been drawn in by an infomercial. He's already launched a Web site (metrolinaestates.com) that features homes with a minimum $500,000 asking price. Recently, it included two listings.

"It's been a fun ride in short sales, but the number of defaulting homeowners is eventually going to go down," he says. "One day soon I want to be doing an interview about how I sold the most million-dollar listings in Charlotte."

This article appears in the May 2009 issue of Charlotte magazine.
Categories: People
Contest of the Month