THERE'S NO NEON SIGN or fancy façade marking Dot Dot Dot, the self-styled “culinary driven bar experience” in Park Road Shopping Center’s Backlot. The back deck of the Flying Biscuit restaurant above the basic brick entryway will be your only bread crumb.

You might think you’ve been transported to the era of back-alley speakeasies and secret passwords. That’s just the mood partners Stefan Huebner (former master mixologist at Cosmos Café and Heist Brewery) and Conrad Hunter (owner of Foxcroft Wine Co.) were aiming for at this members-only bar.

Was it mere coincidence that James’ “At Last” was playing when I took my first sip of a flawless dirty gin martini? I think not.

Classic cocktails such as the Gibson, the sidecar and the Manhattan are pleasantly retro. Creative house specialties, with names including “Bi-Plane,” “Hit the Wall,” and “Thai Basil Smash” on a recent menu, cleanly break with tradition. The last is my personal favorite, blending cognac, gin, and Asian spices with an infusion of fresh basil that nicely complements instead of overwhelms.

The dining menu’s small plates, ranging from cheese plates to bone marrow, merely buttress the drinking experience. But when they’re spot-on, such as the buttery-tender char-grilled octopus, you might consider doubling the portions for your next trip. That’s the key to Dot Dot Dot’s spell: Nurse an old-fashioned one day after work, come back next time for a midnight “Truffle New York Sour.”

Because you will come back. 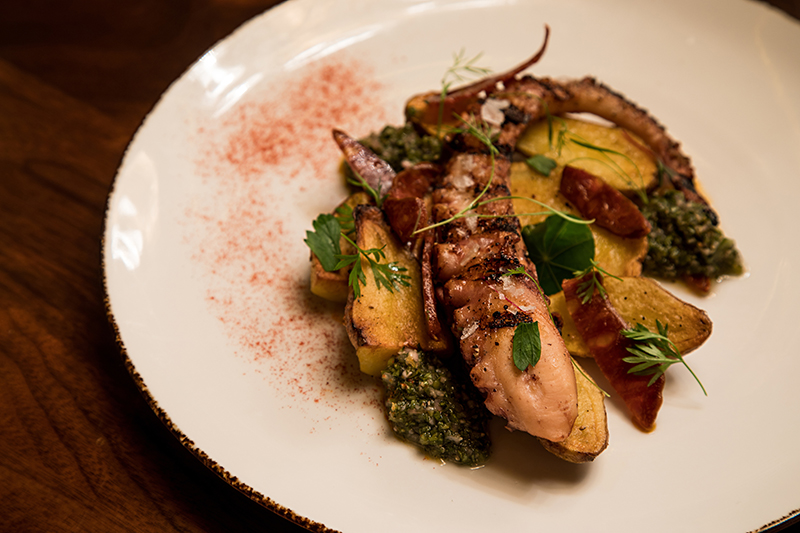 Cocktails are the focus at Dot Dot Dot, but dishes such as the char-grilled octopus with fingerling potatoes (above) are worth attention.

This article appears in the November 2017 issue of Charlotte magazine.
Categories: Food + Drink, In Print
Contest of the Month