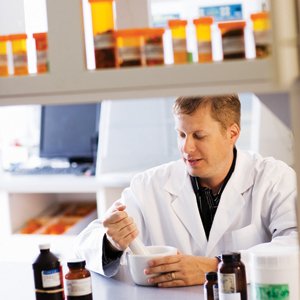 Doug Yoch compounds medication, a technique that dates back to the origin of pharmacy and has reemerged as a solution for patients having problems taking certain medicines. – Chris Edwards

When youngster Jared Reynolds was diagnosed with leukemia, his mom, Stephanie, said she knew he was too young to handle traditional oral chemotherapy. "At the time he was three years old," she recalls. "The pills were not something I felt he'd be able to take."

And she was right. For pediatric cancer patients (many of whom are diagnosed as early as one or two years old), chemotherapy pills often prove to be too difficult to swallow.

"It’s not safe for parents to crush pills," says Debbie Rhyner, a research nurse at Presbyterian Blume Pediatric Hematology & Oncology Clinic, who has worked as a nurse for more than twenty years. "Stanley really is the only pharmacy that’s able and has the capabilities of compounding the pill form into a liquid form safely."

While the process may sound unusual, compounding is the root of all pharmacies, says Michael Gum, pharmacy director in the Presbyterian Healthcare System. "In the 1800s a pharmacy might only fill five or six prescriptions a day because everything was compounding," Gum says. Now, however, the process is used to fill the niche that the major drug companies don't.

Compounding can also be used to create specific doses for patients and to make one capsule out of different medications, which is especially useful for people taking pain medications, Yoch says. Once he makes sure all of the medicines a patient is taking are chemically compatible, he can combine them into one. "They are able to use just one, and this helps the patient to be more compliant," which relieves the stress of having to deal with many different pills or creams, Yoch says.

According to Yoch, many medicines, such as ibuprofen, can be turned into a gel or cream, which can alleviate pain without the negative effects that the drug may have on the digestive tract. "Ibuprofen is very hard on the stomach," he says. "When applied directly to the site of the pain, you are protecting the stomach and getting relief directly at the site. Someone in chronic pain is used to having 'medicine head.' It can slightly reduce that effect."

But it’s not all textbook chemistry for Yoch. With his younger patients, he’s also a bit of a candy man, cooking up flavors until he finds one a child will like. Some medications can quite literally be turned into candy, such as the lollipops Yoch makes for kids who've just gotten their tonsils out. Or when his oldest daughter, Presley, had acid reflux as a one year-old, he says he tried a variety of flavors until he could find one she could stomach—banana cream.

Perhaps the old adage is true: A spoonful of sugar helps the medicine go down.

For more on this medical technique, visit www.stanleyrx.com .

This article appears in the November 2007 issue of Charlotte magazine.
Categories: Buzz > Health
Contest of the Month