Basil, oregano, dill, and more -- what to do with this summer's fresh herbs

If you planted an herb garden in the spring, by now the oregano has taken over the patio and the basil has gone to seed. The rosemary has doubled in size and the lavender, well, it smells good, but what do you do with it? By mid-summer, when you're overrun with herbs but desperate not to waste the bounty of your kitchen garden, try something new.

Traditional use: Tossed with garlic on roasted potatoes or stuffed in a roast chicken.
Try: Adding a tablespoon to homemade bread or cornbread.
Impress your friends: Toss 1 tablespoon chopped rosemary with 1 pound cashews, 1 tablespoon melted butter, 2 teaspoons salt, 2 teaspoons brown sugar, and a dash of cayenne pepper. Roast at 350 degrees for ten minutes.

Traditional use: As part of the classic mozzarella/tomato/basil triple threat.
Try: Infusing olive oil with basil and using the oil to pop popcorn
Impress your friends: Make a party dip by blending 1 small package of feta cheese, 10 basil leaves, 1/4 cup olive oil, and 2 tablespoons lemon juice in a blender. 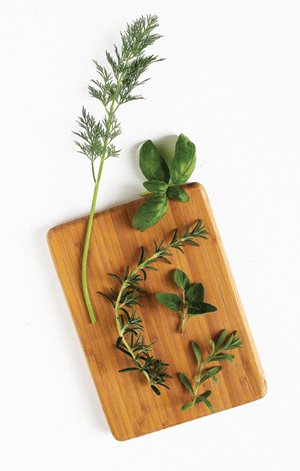 Traditional use: Repelling scorpions from windowsills in the south of France or scenting your lingerie.
Try: Adding chopped lavender to a lemon pound cake mix or using it to garnish maple-syrup pancakes.
Impress your friends: Make a lavender-infused simple syrup to flavor iced tea or sparkling wine. Bring 2 cups water to a boil, 1 cup sugar, and 1 tablespoon fresh lavender (leaves or buds). Reduce heat and simmer fifteen minutes. Strain and cool before mixing with beverages.

Traditional use: When you smell pizza sauce, you're smelling oregano.
Try: Adding minced oregano to clarified butter and brushing it on roasted or grilled corn on the cob.
Impress your friends: Broil halved heirloom tomatoes topped with 1 tablespoon feta cheese, a drizzle of olive oil, and 1/2 teaspoon chopped fresh oregano until cheese browns, three to four minutes.

Traditional use: In soups, stews, and roast chicken paired with lemon
Try: Using it with Dijon mustard as a marinade for catfish
Impress your friends: For thyme scones, add thyme leaves to the Bisquick biscuit recipe (on the box) but replace the milk with heavy cream and add 2 TBSP melted butter

This article appears in the June 2008 issue of Charlotte magazine.
Categories: In Season
Contest of the Month