Buying a home based on a blueprint requires a leap of faith—and that is just how Linda Swayne describes the decision to trade a 4,000-square-foot traditional home in the University area for a two-bedroom condo on the 39th floor of an uptown high-rise.

“We lived in a traditional neighborhood in a traditional house filled with traditional furniture, and we wanted the opposite,” Swayne explains. “We loved the idea of walking to restaurants and other things to do and thought the space was exquisite, so we decided to go for it.”

Linda, a marketing professor at UNC Charlotte, and her husband, Bill, owner of Invisible Fence South, an invisible fence distributor, decided to make the transition after their kids went off to college. When the couple signed the sales agreement to purchase the 2,262-square-foot unit at The Vue in 2005, they had no idea they wouldn’t be able to move in for five years. The original developer defaulted on construction loans, multiple buyers sued to cancel their sales agreements, and the building went into foreclosure before it was converted into mostly rental units.

“We threatened to leave,” Swayne recalls.

After looking at units in several other buildings, the couple decided The Vue, with its spectacular views of uptown landmarks like the new Romare Bearden Park and Bank of America Stadium, was meant to be their home after all.

When construction was completed in 2010, the Swaynes were one of just 16 homeowners living in the 409-unit building.

But the building’s evolution was just the beginning for the Swaynes. The couple traded the traditional furnishings and accessories from their former home for contemporary décor befitting the modern unit. To help with the transition, they hired Ginger Brewton of Charleston-based Ginger Brewton Interiors to design the space. 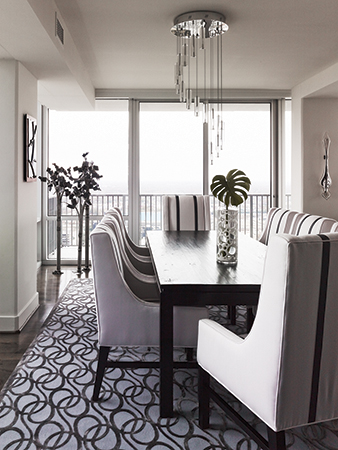 The Swaynes gave up their traditional home in the University area for a contemporary design in The Vue uptown.

“It’s a modern building, and she wanted a contemporary design that reflected that,” says Brewton.

Throughout the unit, Brewton mixed mass-produced pieces from retailers like Baker, Ferguson, and Stark with one-of-a-kind finds from local galleries and artists.

“It took a lot of time and thought to pull it together, but it was worth it in the end,” Brewton says.

To take advantage of the floor-to-ceiling windows in the living and dining rooms, Brewton chose a streamlined sectional sofa covered in white linen from Baker Furniture along with custom accent pieces, including a pair of purple chenille chairs and a modern wingback chair covered in white eel skin. Swayne, who counts the unique living-room chairs as her favorite furnishings in the open floor plan, calls the seating “contemporary but comfy.” It’s a statement that could be used to describe the entire condo.

The light streaming through the windows also showcases the couple’s collection of artisan glasswork. In fact, several of the colorful pieces, which range from “seconds” that were purchased at a discount to custom pieces, take center stage in front of the living-room windows.

With the help of Brewton, Swayne incorporated both sculptural and functional pieces into the living room, including a custom glass and metal side table and an abstract glass sculpture created by North Carolina glass artist Greg Fidler that sits on the coffee table.

In the dining room, sleek dining chairs covered in durable outdoor fabric surround a handmade table fashioned from hand-scraped walnut. To unite the spaces, Brewton chose one-of-a-kind silk rugs; the patterns are different, but the silver color is a hallmark of both pieces.

It was also important to Brewton to create a connection between the traditional finishes the couple chose for the kitchen, including cherry cabinets and granite countertops, with the modern décor in the rest of the unit. She chose sleek pendant lights and a trio of white lacquered stools with chrome accents to serve as seating at the breakfast bar.

To provide a comfortable space for the couple to relax with a coffee and the morning paper, Brewton placed two diminutive chairs covered in textured Schumacher fabric from Barnes Custom Upholstery in High Point that mimics the color palette in the living and dining rooms. In addition to serving as a sweet vignette in an otherwise unused space, the furniture helps tie the spaces together.

A passion for local art is another unifying feature in the space.

“We’re big supporters of local artists,” Swayne says. “I buy pieces from artists I like as much as I like their work.”

Swayne commissioned local artist Edwin Gil to create original works of art for the guest room and en suite. The lime green and purple painting hanging above the bed stands out against lavender walls and offers a colorful contrast to the custom black eel-skin headboard.

“Linda is not afraid of color!” Brewton says.

To ground the room, Brewton chose sleek nightstands from Bungalow 5 and a modern chair covered in black felt.

Black is also the hallmark “color” in the powder room. The walls are covered in black wallpaper adorned with silver beads in a geometric pattern; a colorful painting provides a bold contrast to the dark background. In choosing bold patterns and colors, Brewton notes, “it has to be something you’re in love with and want to have for a long time.”

The good news: Swayne is smitten.

“Every time I walk in the door, I love it all over again,” she says. “We have everything we need right here; it just makes me happy.”

This article appears in the December 2013 issue of Home + Garden.
Categories: Home & GardenFeature, Spaces
Contest of the Month