Essay: The Present of My Dad’s Past

An old leather jacket from the Village and another era. An ex-archeologist who preserves what she or someone else has dug up. Here’s a holiday story about the gifts we salvage from years and lives past

Of all the things I inherited from my dad, Bruce, a strong, steadfast hairline is the one I treasure most. His black leather motorcycle jacket is a close second. Not because I wear it. Shit, I can’t pull off that look. It’s too small, too impractical, and too not-a-white-Toyota Prius-that-is-unmistakably-not-a-Harley. 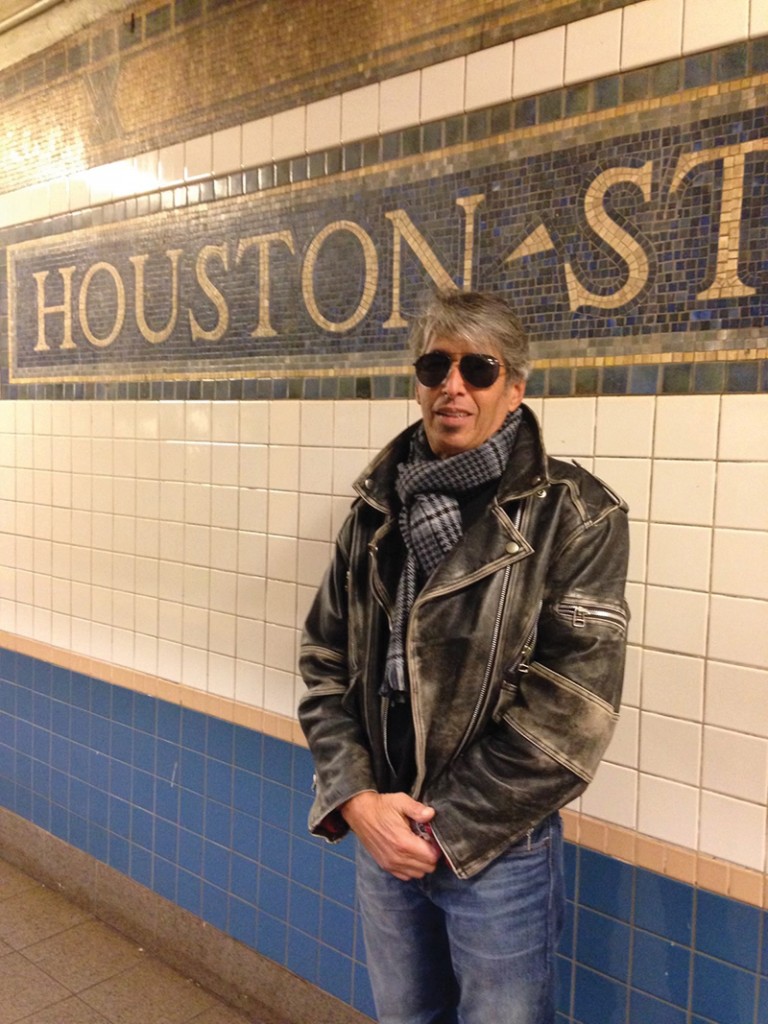 When my dad bought it, he didn’t even own a motorcycle. But the attitude and spirit that comes with it? He had that for miles. According to legend (my mom), he bought it in the early 1980s as they walked down Eighth Street in Greenwich Village. Out of the corner of his eye, he noticed the sheen of the leather and reflection of the silver buttons and zippers, and, like a bull, was captivated by its red flannel lining.

He wore it as often as he could. Soon after I moved to Charlotte, he and my mom flew up from their new home in Miami for Thanksgiving. I pulled up to the terminal and found him on the curb, wearing the jacket, shivering. He got in, and we hugged across the center console. My hands felt the chill of the leather. He didn’t care how cold he was. He was just happy to have an excuse to put the jacket on again.

I treasure it because it was his. It’s what I have left.

Lindsay Parker excels at making things reappear—those buried underground for millennia or shoved to the backs of bookshelves, dresser drawers, and coat closets. A former archaeologist, Lindsay once unearthed a pottery shard in the Florida panhandle. The prehistoric artifact was from a pot used to boil water.

“What was so significant about it was the patterning,” she says. “It was a pattern I hadn’t seen before. It wasn’t something I that I had seen in my history books or my anthropological books.”

That’s what Lindsay loved about archaeology: the “vast beauty” within small items like the pot. She calls it the “stuff,” a humble word she employs with the kind of reverence astronomers use when they gaze into telescopes at the heavens. “When you get down to the heart of what objects are, they’re either tools or they’re completely superfluous,” she says. “And I realized that it was the completely superfluous stuff that I was most interested in, because it was the things that made us human.” 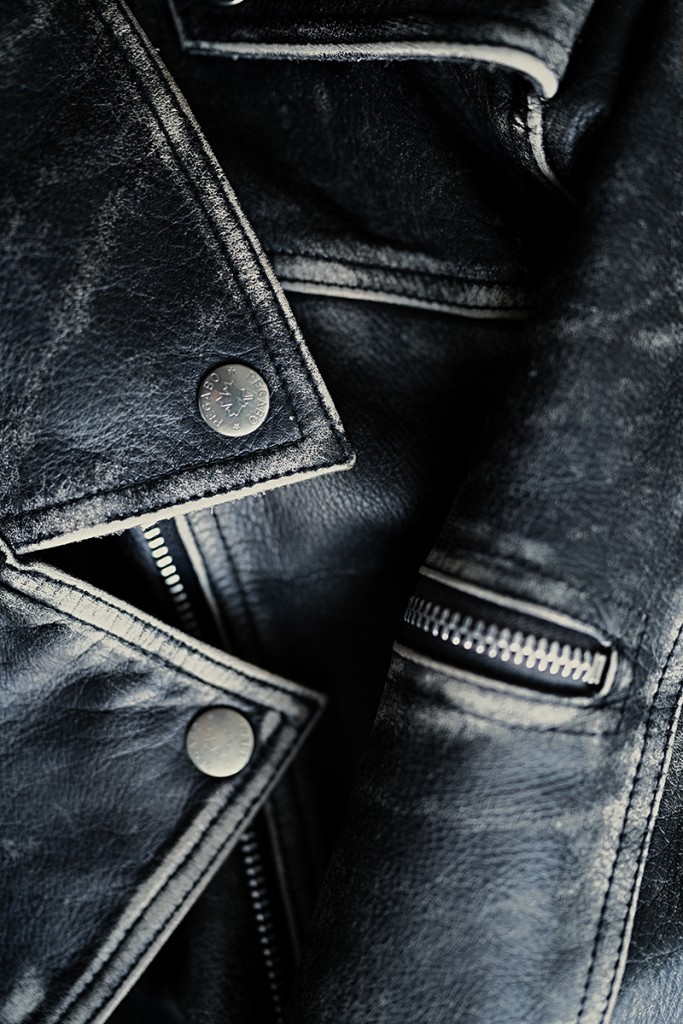 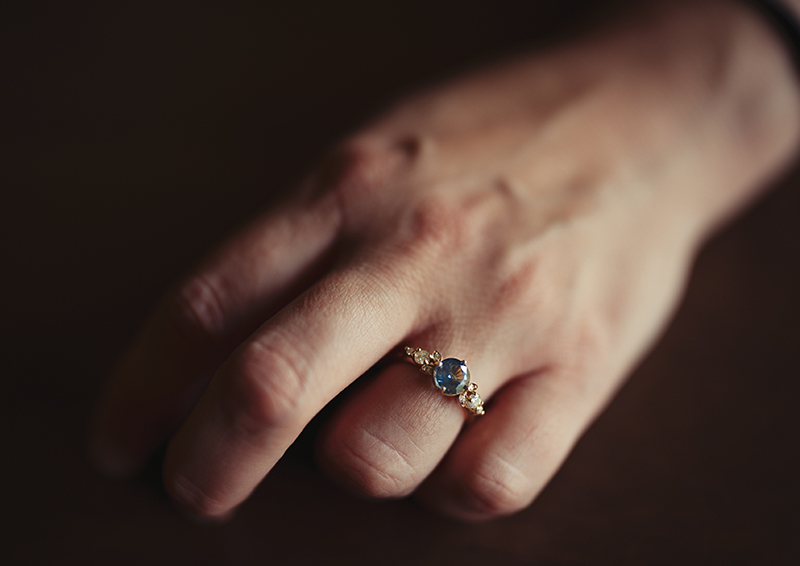 Lindsay left archaeology for a job at a startup that supports self-published authors, but she never lost that love for stuff. “Whenever I had a bad day,” she says, “I was like, ‘I’m just going to go work in a jewelry shop.’” Once she had the courage and means to do so, she quit her job in 2013 and worked for four years in a local Charlotte shop. She designed and sold custom jewelry, handled people’s heirlooms, and sold items that could become heirlooms. She eventually realized the connection between the lockets, pendants, and rings she worked with and the tools and knives she’d dug up on excavations: “my drive towards preserving.”

I reach into the far left of our coat closet until I feel the coarseness of the leather and the cool metal of the buttons and zippers. It’s April, and in the four and a half years since my dad died, the jacket hasn’t seen much daylight. Some days, I take it out, hold it up, and wonder what he would be like if the lung cancer had never come. Other days, I try it on to see if it fits any better than the last time. 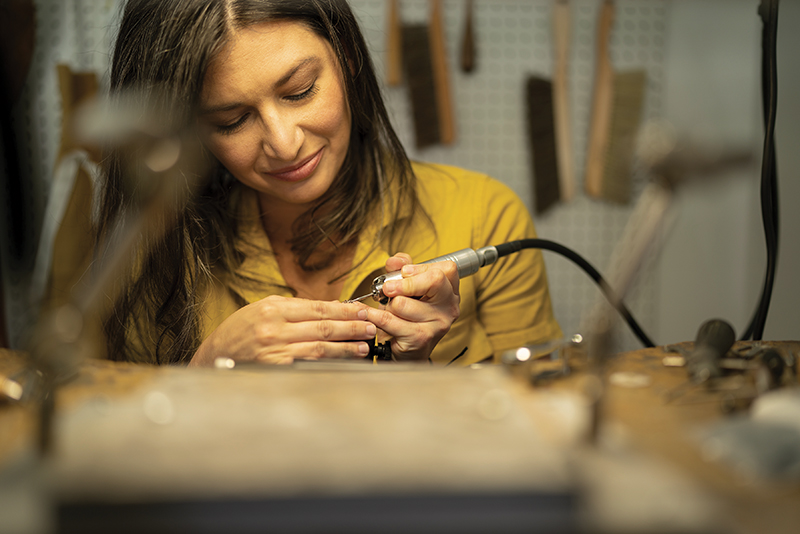 Lindsay Parker of The Antiquarian fashions custom jewelry from heirlooms, like the button from Bruce Soloff’s leather jacket that she turned into cufflinks (below). Photographs by Herman Nicholson. 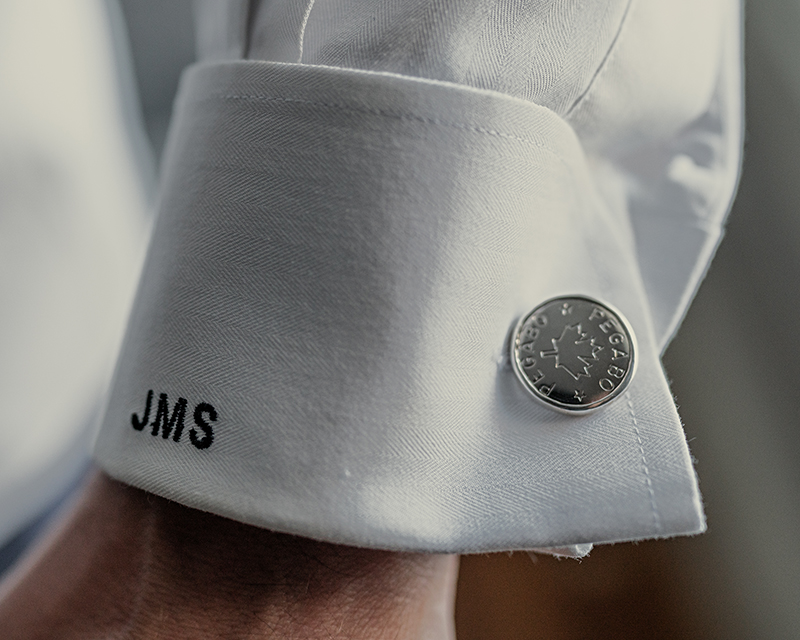 The first thing you notice when you walk into The Antiquarian, the custom jewelry design shop Lindsay opened four years ago, is the antique jeweler’s bench and tools that dot the surface and walls around it. Chasing hammers and punches and dapping blocks. Files and soldering blocks and polishers. Like the jewelry Lindsay handles and crafts, she’s either inherited or customized most of what you find on her bench.

“It’s broken and janky, and I love it,” Lindsay says. She looks toward the bench, where she’s spent hours poring over other people’s jewelry as if it were her own. There’s the ring made from a piece of tanzanite that Frank brought back from Mount Kilimanjaro. There’s Meredith’s pendant—her father collected flashlights, so Lindsay made her a flashlight-shaped pendant as a keepsake after he died, with a bulb made from a small diamond earring he’d given her as a birthday gift. There’s the hair ring, an old Victorian tradition presented as love tokens or to commemorate a death, that Lindsay made for a friend. It includes strands from her firstborn.

The wedding suite for Amanda and her fiancé consists of six items crafted from family heirlooms, including a necklace from her mother and a diamond ring she inherited from her grandmother, who recently died from COVID. “Basically, when she walked down the aisle,” Lindsay says, “she was wearing multiple generations of women.”

I hand Lindsay the 6 1/2-pound jacket, and she examines the buttons: the four that accentuate the collar, two each on the shoulders and front pockets, and 12 along the belt loops. I’ve asked her to take four and fashion a pair of cufflinks for my wedding celebration the next month along with two lapel pins, one each for me and my brother. She’ll use a jeweler’s saw to cut sheet metal in the shape of a circular base before she rounds some wire and solders the two together. From there, she’ll trim off the excess, strip the buttons from the jacket, and set them into the base.

These cufflinks and pins will serve a practical purpose at the wedding, but the real reason I want them? I miss my dad. With each year that passes, it gets harder to remember the rasp in his voice, the way he used to call me “Jess,” and that thick head of hair.

Memory is an exercise. Sometimes, the little things we hold on to, the stuff, is the weight we need to carry to fight off the forgetting.

Lindsay tells me she’s always relieved when she returns pieces to clients. “The thing that I love to do is also the thing that scares me the most. It’s very easy to accidentally ruin a piece of jewelry or break a stone,” she confesses. “And the stuff that I’m working with a lot of the time isn’t necessarily super expensive. The issue is that it’s irreplaceable. There’s one.” 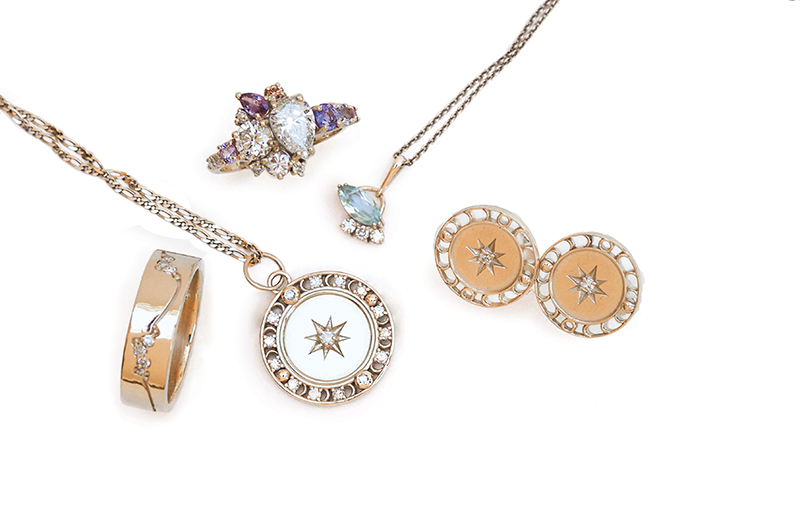 Other items she’s crafted (below, clockwise from top left): a Victorian hair ring; a flashlight pendant; a ring that contains a piece of tanzanite from Mount Kilimanjaro; a wedding suite. Courtesy Lindsay Parker.

On the day of the wedding, Kyle and I put on our suits in my hotel room. It’s not always easy for brothers to share feelings with each other. But as he affixes his lapel pin and I place my cufflinks, we share memories about Dad and acknowledge how proud he’d be of the two of us. Throughout the reception, friends ask about the pieces, and I tell them about Dad, share the story, and laugh when I think about the kick he’d get from knowing the leather jacket he impulsively bought 40 years ago had found its way into my wedding.

My wife, Katie, is due with our first child next April. I’ll never be as cool as my dad was, but I hope to match him in generosity, attentiveness, and devotion. Someday, I’ll give what Lindsay made for me to our son or daughter and tell them about their Grandpa Bruce.

Until then, I’ll be searching for new dress shirts. I have a great pair of cufflinks to go with them.

Jesse Soloff has lived and worked in Charlotte for 13 years. His previous contributions to Charlotte magazine include the award-winning “Our Last Home,” published in April 2017, and “A Tree Grows” in February 2021. He and his wife, Katie, live in NoDa with their dog, Cali.