CONVERSATIONS ECHOED around the lobby of the Hilton in Greenville, South Carolina, which was packed with guests for the town’s annual Euphoria Greenville food, wine, and music festival, held each September. As the home of Michelin, the tire company and publisher of the coveted Michelin restaurant guide, the city of just under 70,000 people is able to bring in some of the country’s best Michelin-starred chefs, and has since 2006. The 2017 festival brought Chef Dominique Crenn, a James Beard Award-winner and owner of Atelier Crenn and Bar Crenn in San Francisco.

My admiration for Crenn began from an episode of Chef’s Table on Netflix. She has a pure spirit, unpretentious and unabashedly herself; a genuine curiosity about others; and doesn’t let the constraints of expectations burden her mind. So as I checked into the hotel, I had a mental checklist of two things to accomplish: report this story, and meet Dominique Crenn. 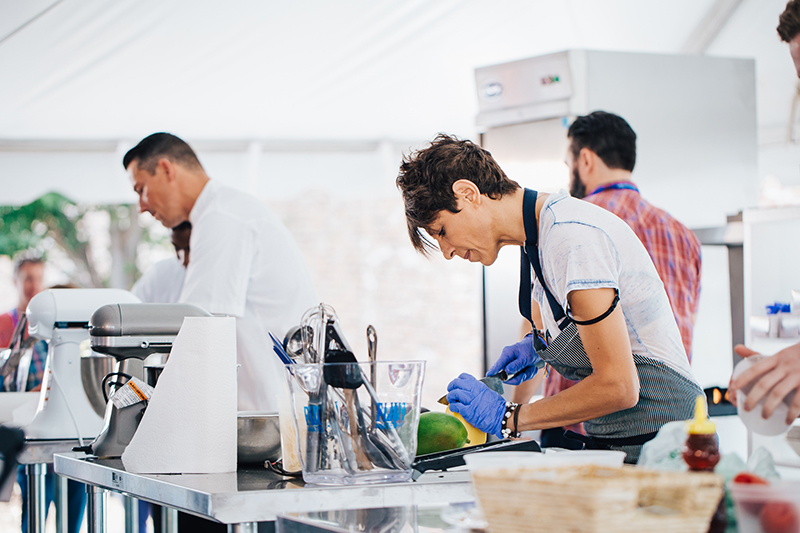 One of the weekend’s most coveted tickets is a dinner by Michelin-starred chefs, including Dominique Crenn.

She was holding a Q&A at Michelin headquarters not long after I arrived that Friday. I would check in, settle in to my room, and call a Lexus for a ride over—the car manufacturer sponsors the event with a fleet of brand-new SUVs, which local volunteers shuttle guests around in. I hit an immediate snafu: My hotel room wasn’t ready. 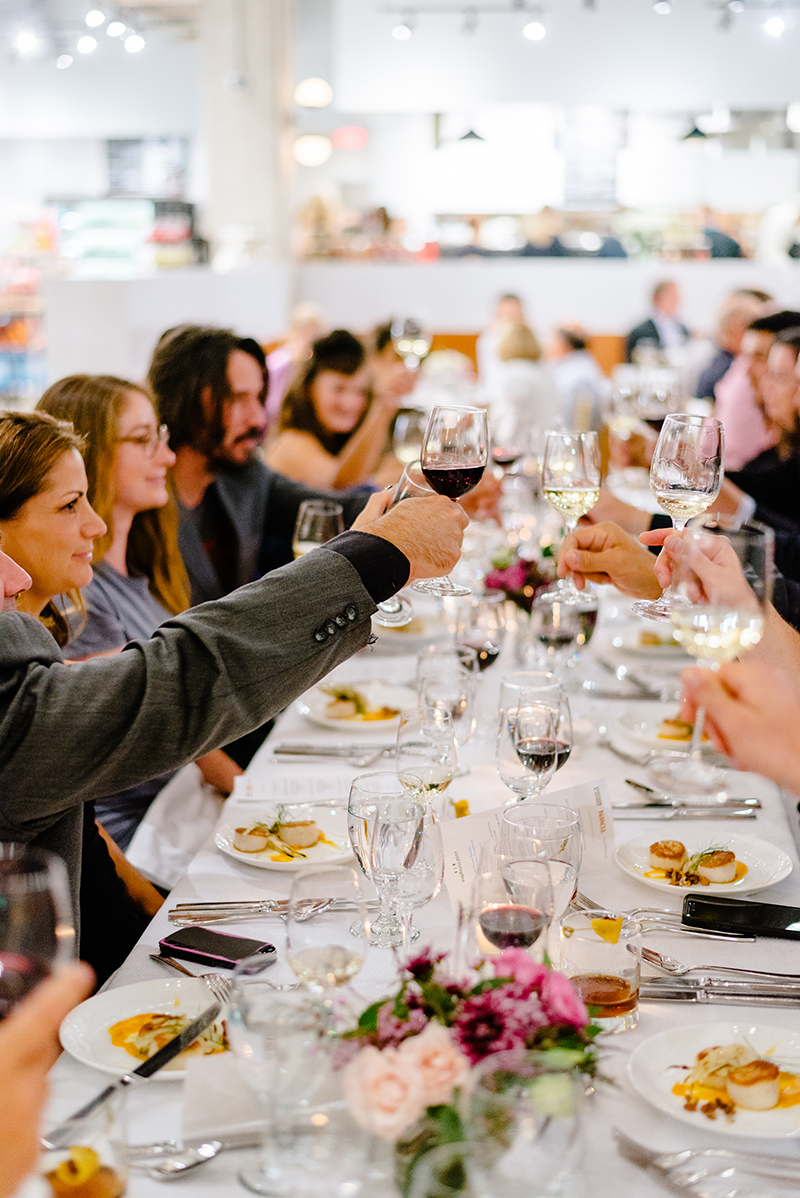 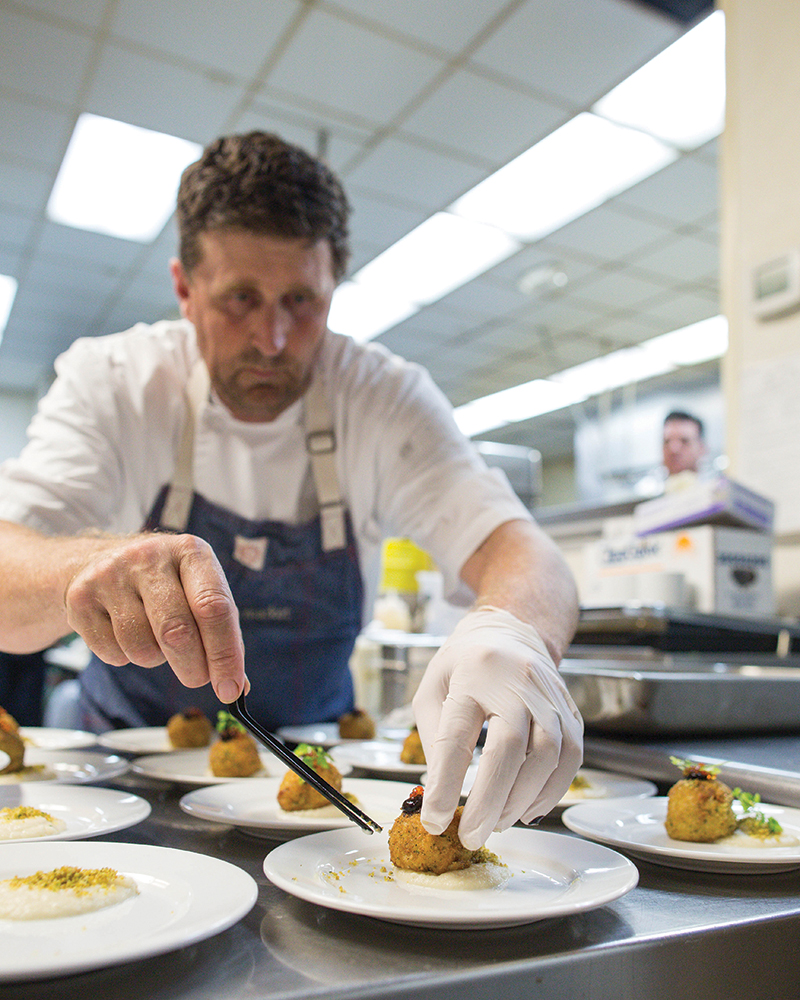 You can find Charlotte chefs, such as Bruce Moffett (above) and Matthew Krenz, at the food festival each year.

I stood near the front desk, debating whether to wait for the room and miss Crenn’s speech or wear my traveling clothes for the rest of the day and get into the room later. And then she was there, in the lobby, 20 feet from me, holding a cup of Starbucks coffee, in a pink-and-blue plaid shirt. Even in sunglasses, she was unmistakable.

I made my way over to her, trembling at the thought of meeting this person, a champion for women in the food industry, accidentally ignoring chefs Matthew Krenz of The Asbury in uptown Charlotte and John May of Durham’s Piedmont Restaurant on my way. Sorry, chefs.

I got close enough to talk to Crenn, and made a joke about how I was surprised to see the honored guest loitering around the hotel lobby. I told her how much I appreciated what she was doing for women. I hoped she would live up to the person I had built up in my head.

She shared that she’d recently taken a DNA test, and that the results were diverse—“I’m black, white, yellow, purple,” she told me. I asked her opinion on how journalists can help normalize diversity in kitchens, and we discussed the difficulty of working in the restaurant industry in expensive cities such as San Francisco or New York. For 20 minutes we chatted, and her disregard for the status quo was inspirational. I asked her for a selfie before she left, and immediately called my friend Fahima to tell her how incredible Crenn was before going to see her speak.

That night brought live music and samples at the Taste of the South event, which takes place in what was once a Duke’s mayonnaise factory. There were familiar faces—Krenz and May, Clark Barlowe of Heirloom, Ashley Boyd of 300 East—cooking that night. Thomas Marlowe of Mimosa Grill and Bruce Moffett of Barrington’s took part in a guest chef event centered around chicken the next night, while Scott Hollingsworth of Rare Roots Hospitality took part in the massive Saturday afternoon tasting tent with samples of wine, liquor, and food.

The dinner of Michelin chefs takes place Saturday night, one of the event’s most coveted tickets. It was there that Crenn cooked, along with chefs Curtis Duffy and Michael Mina. I didn’t attend, however—my husband and I were at The Big Easy bash, where we kept returning to see Chef Joe Trull from Grits & Groceries in Belton, South Carolina. I’d never heard his name, but after each return to his booth for more fresh beignets, I wondered why. As we spoke to the chef, I recalled something Crenn said about recognizing more diverse talent. The chefs are there, she told me, but we just need to find them, beyond the pages of the top 100 lists. Here was one, right in front of me, with beignets that could compete with the best of New Orleans.

The next time I attend, my goal at Euphoria will be a little different. And it will be here at home, too. It’s easy to admire the chefs that are always in front of you. It’s more special to find the ones who deserve your support, and help showcase their talent to others.

This year’s festival takes place September 20-23. Tickets for Euphoria Greenville are on sale now at euphoriagreenville.com, and packages range from $170-$1,195.

This article appears in the July 2018 issue of Charlotte magazine.
Categories: Food + Drink, In Print