THE BEGINNING of this story is familiar.

A nondescript structure in uptown heads toward transformation, courtesy of Charlotte artists.

This was the idea for the first Skyline Artists in Residence project, which inhabited an old Goodyear store on Stonewall Street for six months. The program, headed by Amy Bagwell, Amy Herman, and Graham Carew, centers on providing four needs for the city’s artists: space, time, money, and community. This July, the project garners a new name and location as it heads to the empty building at 516 N. College St., a former nightclub/comedy club. 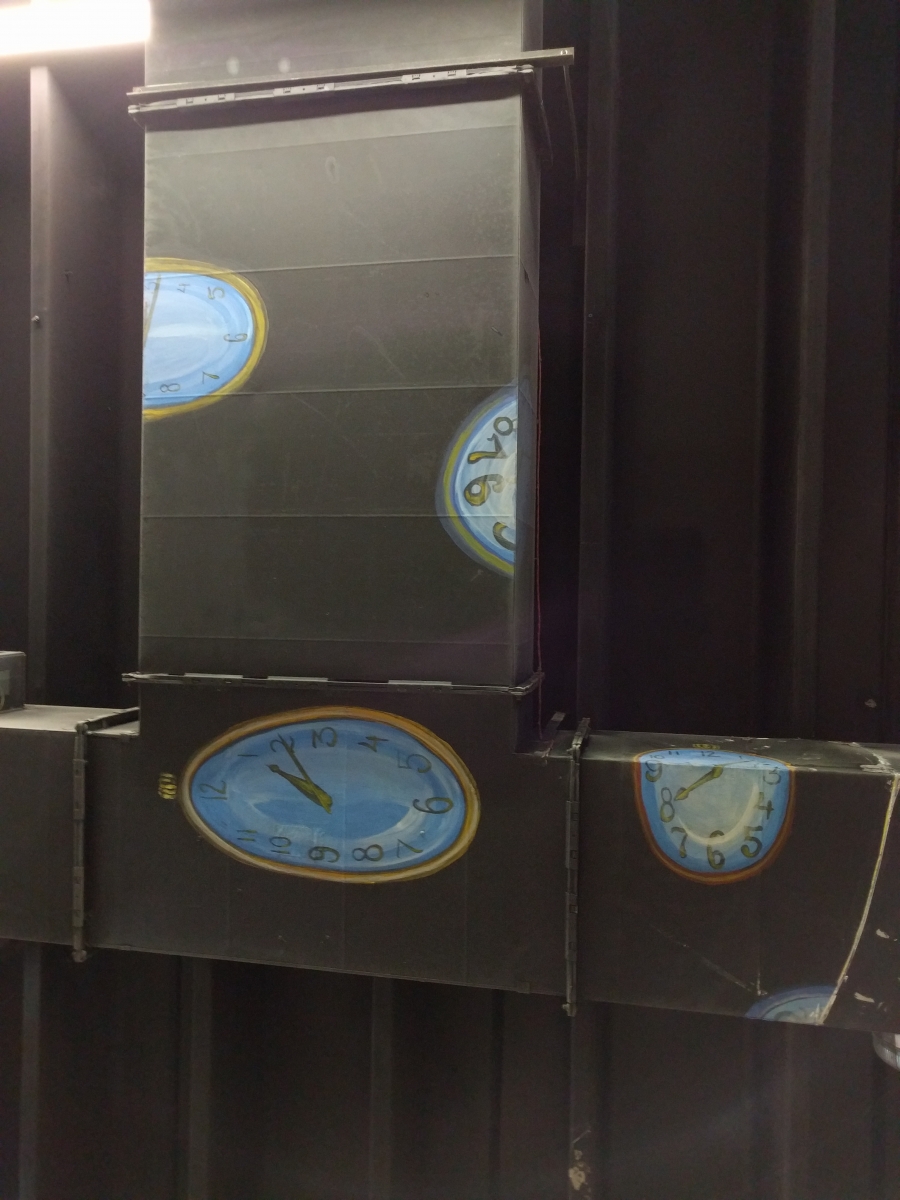 Remnants of the former nightclub Time Lounge can be seen on the ceiling above the studio space.

Skyline Artists in Residence is now Goodyear Arts, a moniker that pays tribute to the original location. Yet, the story—and the format of the residency program—evolves, instead of retrofitting the original concepts of the project into its new venue. The first notable change is how the public experiences the program.

“One thing we learned was that part of our mission is that we really want to make more room for community,” Herman says. “This has been really important to us all along, but at [the former location], we didn’t necessarily have the appropriate space to do this. But here, we’re actually going to have open gallery hours and the show will stay up after the showcases.”

Goodyear Arts’ last iteration had one-month residences that culminated in single showcases once a month. Each was packed, but all were blink-and-you-miss-it affairs, in terms of enjoying the works created. Now, the artist residencies are two months in length. Between July 2016 and December 2016, that means only three showcases, but new open gallery hours, Wednesday-Saturday (10 a.m.-6 p.m.), ensure that the community’s relationship with Goodyear Arts is ongoing. The gallery features an area intended for members of the public as a “solo or collaborative creative space” with free access to Wi-Fi.

The new space, neighboring First Ward Park, was once split as Time Lounge and The Comedy Zone. The structure’s owned by Levine Properties, which donates the space for this six-month project. (Levine Properties was also a major backer for the 4-acre public park.) Crescent Communities, which backed the original program and owns the old Goodyear store set for demolition, now stays on as Founding Sponsor.

Another change: The first round had visual artists, dancers, thespians, and musicians as residents. This time, the program also accepts writers, filmmakers, and photographers.  Artists’ stipends are now 50 percent greater than the previous project. Goodyear Arts’ current pool of potential artists come from recommendations of alumni artists, who also get get a shared studio in this new building. Though, the trio of Bagwell, Herman, and Carew is still open to letters of intent from artists.

“Sharing a space is so intimate,” Bagwell says. “There has to be a spirit of collegiality and not a mercenary attitude that detracts from other’s work. On the very intangible side, are you making interesting, daring, challenging, beautiful work? And also, are you cool? Not ‘cool,’ like Fonzie. But cool, like … “

Even with these several changes, Bagwell hopes the spirit of the original Skyline in Artists in Residence project remains. “There was very much a feeling of family and respect at Skyline, and lots of collaborations have developed out of that project,” Bagwell. “So we really want to continue that. With the alumni studio and former artists rehearsing and creating here, that continues the ethos of the program, instead of us just telling people that message.”

Goodyear Arts at 516 N. College St. kicks off July 1 and runs until the year’s end. More info here. A midsummer preview party, and other arts events, are also planned for the space, with details ahead. Check out a video of the original project below.

Skyline Artists in Residence at Goodyear from ND Films on Vimeo.

This article appears in the May 2016 issue of Charlotte magazine.
Categories: Arts + Culture