As more people move to the city, natives link up with newbies. We sit down with fifth-generation Charlottean Brian and newcomer Chevy, who have dated for two years 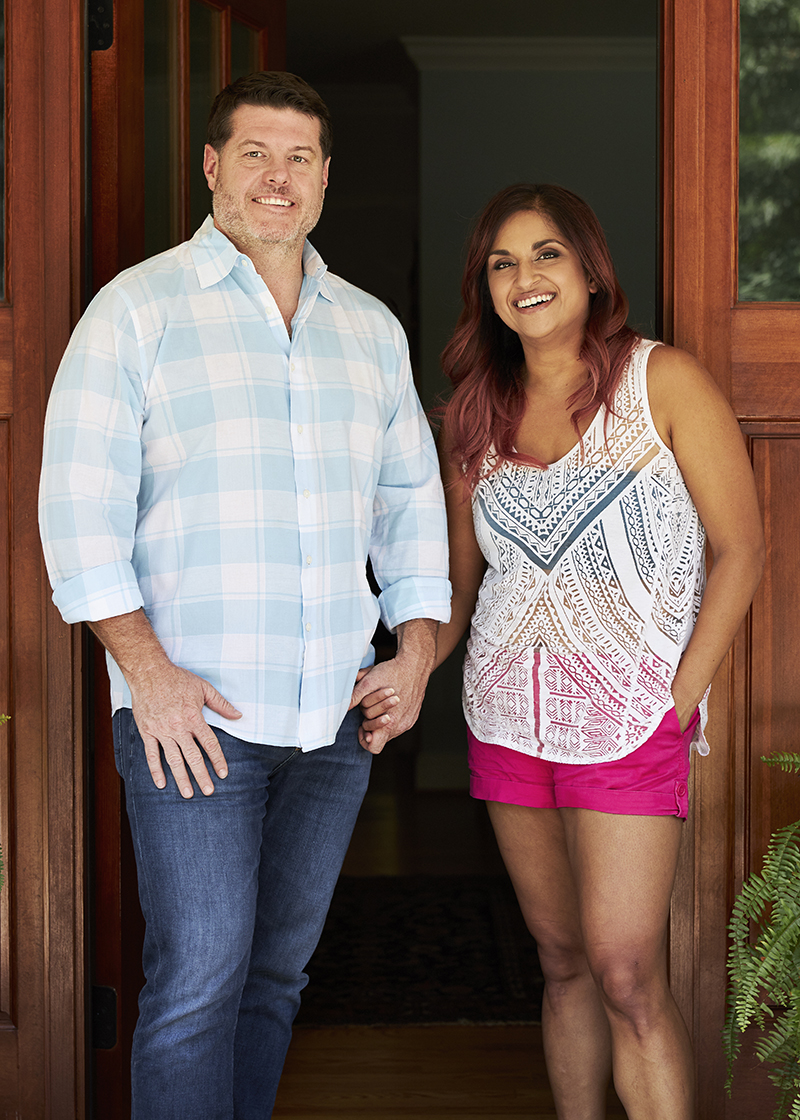 The Newcomer: Shivali “Chevy” Goudar, 33 (right)
Moved to Charlotte for: Her job. Most recently from Washington, D.C., but she’s also lived in Dallas
In her spare time, you can find her: Producing “Chevy Does Charlotte,” a variety show in NoDa

You met on the Bumble dating app back in summer 2017. Where was your first date?

Brian: I took her to the Summit Room on East (Boulevard). We sat in the rocking chairs out front … until the mosquitoes descended on us.

Chevy: I had been here for work a handful of times, and I knew of Ballantyne, because that’s where my office was—so the whole idea of online dating was to meet people and make friends.

B: I’m a fifth-generation Charlottean. Two brothers settled here from the potato famine in Ireland. They settled in Cornelius and in South Carolina—my family’s been here since.

Chevy, what was your first impression of Charlotte?

C: It’s cliquey. I felt like it was difficult to break into a group of friends. D.C. was crazy transient as well, but it was easy to meet new people. Here, it was harder. But since Brian knows everyone here, it’s been so much easier. He takes me to all the places with good food.

So then, where’s the best fried chicken?

B: The barbecue-dunked fried chicken at Chicken King off Wilkinson. That’s chicken worth having.

B: And Price’s. But new school? Publix. They got the salt just right. Oh, and the corner of East and South Boulevard. That gas station.

Chevy, have you discovered any places to show Brian?

C: And Sanctuary is the only bar we go where they knew me before (Brian). Everywhere we go, he knows somebody. But in NoDa, they know me.

It must be the variety show. How’d  that come about?

B: Chevy asked me where all of the fun, neat, interesting people were, and then she told me about this variety show (she had produced in D.C.). I said, ‘If you really want to know the creative, interesting people, don’t go searching them out. Make a place for them to come to you.’

C: I like the speed of this city. It’s easier to start something like the variety show. There’s not a lot of hullabaloo around things; we can grassroot it.

Chevy, what’s your impression of Charlotte so far?

C: Not everything is here yet, but it’s still affordable (and) all the cool stuff is still coming in—that’s a fun time to live in a city. It’s not aggressively ‘city’ yet. I like being in this transition. … I’ve become a genuinely happier person moving here, because I’m not dealing with hours of traffic every day.

Brian, how do you feel when people think it’s unique that you’re a native?

B: It’s that whoa factor. It’s a rarity to run into someone from the area. But it’s nice—I feel special. There aren’t many of us running around.

Chevy, what have you learned from Brian?

C: Back roads, all the cut-throughs. The first year we were together, he drove me everywhere.

B: Like 277. You need a secret decoder to understand what lane to be in—you move right, then you move left, then you come in hard, back to the right. We drive around, and I like to point things out.

What originally impressed you when you moved to Charlotte?

C: You can afford things here. And do things like … park. That blows my mind. It’s so neat! I have PTSD from the amount of parking tickets I used to get.

Chevy, have you heard of the Bobcats? What’s their mascot?

B: They’re the Hornets now. Hugo. The Bobcats were the old team.

C: Wait, were they the Hornets—Bobcats—Hornets?

C: We went to a Bobcats game last year!

B: That was the Hornets.

What else have you learned how to say since you’ve moved here?

C: I can’t pronounce Al-bul-marr-ul. ‘As the crow flies’—I hadn’t heard of that until I moved here. But it’s because the city is all funky, not on a proper grid—that, and ‘fussing.’ It’s my second-favorite F word ever.

B: Not anymore. Ballantyne was the second invasion.

Do Charlotteans have an accent?

C: Yes. It’s not quite as drawn out as, say, Georgia or Alabama, but it’s southern.

C: It’s diet winter, and it’s the best. I haven’t had to use my snow shovel yet.

B: It doesn’t snow as much as it used to—that’s sad.

This article appears in the October 2019 issue of Charlotte magazine.
Categories: In Print, The Buzz