One father, two sons, and ten restaurants. The Chens are creating a Charlotte Asian food empire 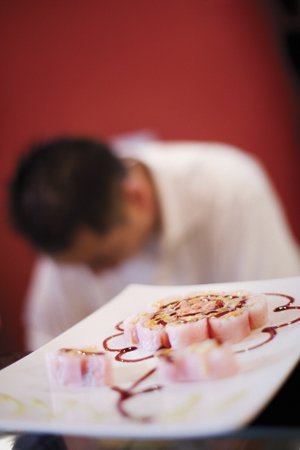 Sushi is the specialty at Room 112, which offers more than twenty-five tasty rolls.

When Andy Chen and his wife, Adrian, quietly opened the doors of their newest restaurant, Room 112, this summer on the corner of Trade and Tryon, it wasn't simply another new stylish sushi restaurant in town. It was the next in a long line of big moves for the Chen family—a father-and-sons trio who have opened nine Asian restaurants in the last sixteen years in the city and are opening their tenth this month in Blakeney.

From the casual paper plates at Manchu Wok at SouthPark mall to the sophisticated uptown business lunch favorite Fujo, in the lobby of the Wachovia building on College Street, if you've eaten Asian food in Charlotte, there's a good chance it's been at a place owned by the Chens. "We are trying to change the way people in Charlotte think of Asian food," says John Chen, the oldest son of Chun Chen and brother of Andy Chen. "Our restaurants are now serving Asian fusion, a mix of Asian and Western."

Chun Chen, who had experience working in the restaurant industry, moved his family from China to Charlotte (via Hong Kong and Virginia) in the early 1990s with the intention of opening his own restaurant. He started with Manchu Wok at SouthPark, where both his sons (he has one daughter, who is not in the restaurant business) learned the trade. They've come a long way from serving to mall customers, though. After owning Manchu Wok for thirteen years, the Chens sold it in 2005, opening Royal Panda in south Charlotte, which he later sold, and then Chen's Chinese Bistro, a popular restaurant serving sushi, Chinese, and Japanese fare in the University area. Meanwhile, John decided to open restaurants of his own.

His first project was Fujo (named after his native city in China). In 2006 he opened Koi in an old Pizza Hut building in Cotswold, then Ginbu 401 in an old Chesapeake Bagel location on Providence, and followed that quickly with Jade in Ballantyne. This month he's opening Room 18 in Blakeney. Andy followed in his brother's footsteps, taking over Koi and renaming it Koishi and now recently opening Room 112. "Every restaurant is slightly different, but the foundation is similar," says Adrian. "Every one has the same core group of recipes tweaked to benefit the specific clientele."

If you've been to more than one of the Chen family's restaurants, you may have noticed similarities on the menus and in the flavors. From featuring the same Asian fusion dishes such as the miso-glazed sea bass and the chicken and shrimp lettuce cups, to adding a signature touch of crunchiness to their spicy tuna rolls, the restaurants share many traits. While they own the restaurants separately, the Chens work together closely to plan each one. "I design the menus and I train others from the recipes I've found in Taiwan, China, Hong Kong," says John, who travels every year or two to get new ideas for the restaurants' menus. "Then we see what would work for different areas in Charlotte."

Room 112 is a slightly different concept for the Chens. While the menu is similar to some of their other restaurants, its location demands a place that can work for both lunch and evening crowds. "For sushi, Nikko dominates the area," says Adrian, referring to the popular Nikko Japanese Restaurant on South Boulevard. "We wanted to bring another option to uptown."

The clientele at Room 112 right now is mainly uptown workers who hurry in for lunch. However, it's quickly growing in popularity as an evening destination, which was exactly as Adrian and Andy had hoped. The interior design certainly reflects a more nighttime atmosphere with lots of red, dark wood, and what Adrian describes as a "liquid and sexy feel." "We're trying to target out of towners and give them something to talk about when they go home as well as uptown residents who want to be able to walk to good sushi," says Adrian. "What we really want is to bring back the quality and healthiness of Chinese food."

Room 112 leaves little doubt to its quality. Highlights on the sushi menu include the 112 Roll ($8.95), a spicy offering with flash-fried tuna and avocado that is the perfect combination of spicy and creamy. The Cherry Blossom Roll ($10.95) is stuffed with savory tempura shrimp, spicy tuna, and avocado. Of course, the menu offers a broad range of other options for those who aren't sushi enthusiasts. There are Indian-inspired Singapore Rice Noodles tossed in a spicy curry sauce ($10.95), Chinese-inspired wok dishes such as Szechuan chicken ($9.95), Thai-inspired shrimp pad thai ($10.95), Japanese-inspired teriyaki steak ($15.95), and even French-inspired foie gras and scallops ($28.95).

And while food will remain their focus, the Chens have plans for both Room 112 and Room 18 to be nightlife destinations as well. "We'll eventually crank up the music on Friday and Saturday nights," says Adrian. "I see it as the kind of place where people could come for sushi and a few drinks before they go out."

This article appears in the September 2009 issue of Charlotte magazine.
Categories: Local Flavor