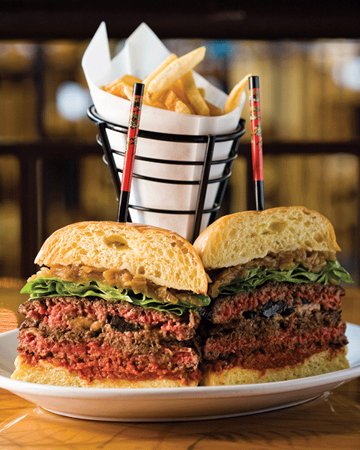 The first time I went to Cosmos to eat the $35 cheeseburger, I wimped out.

I expected something big and unreasonable to justify the price tag. I came hungry and prepared to deal with sixteen ounces of Kobe beef and fancy toppings like caramelized onions. I knew things would get a little messy.

I never imagined, though, that such a creation could possibly be injected with more meat. I had to read the menu twice—the enormous patty was stuffed with braised beef tenderloin, foie gras, and black truffles. And I was on a date.

Suddenly, the line between impressing a girl by ordering the most expensive item on the menu and grossing her out by gorging on an unsettling amount of flesh seemed a lot less clear. My plan for a fancy meal courtesy of the Charlotte magazine expense report became one of half-priced tapas and martinis paid for on credit.

I returned a week later with one of my manliest friends, determined to make a stand. We took over an intimate table near a window, and I placed the order. Then we waited.

The burger came out sliced into two monstrous halves. Instead of toothpicks or tiny plastic swords, a thick black chopstick held each together.

I picked up one half with both hands and held it in front of my face. Braised beef oozed out from the middle, surrounded by what looked like a pair of red lips. Then came the cheese. Then the caramelized onions and, comically, a few pieces of lettuce. Instead of tomatoes, there was marinara sauce. Nearly lost amid all the gore was the bun, which was more of a sweet, delicate croissant.

My first bites were nibbles here and there as I stalled for time, trying to figure out how to fit the whole thing into my mouth. Then I closed my eyes and went in for the kill. I bounced right back, my nose and face covered in juice and sauce. The beef-lips seemed to sneer.

Eventually, I snuck in under the bun, to pare the burger down for a few bites that encompassed all of the ingredients. It began to disappear at an alarming rate and was gone before I knew it. Naturally, the thing was delicious.

Was it worth the money? Of course not. It's a $35 cheeseburger. If you want to impress a date with expensive food, head to the steakhouse down the street.

But the entire experience is an exercise in excess, anyway. Which makes it perfect for expense accounts.