Last night’s show at the Fillmore came to a sudden end after a bomb threat. The incident occurred after members of The Head and the Heart had reportedly played their final song, with fans clapping and waiting for an encore. After a wait, a stagehand informed the audience that the show was over.

According to one attendee, the exact circumstances around the show’s end weren’t announced at the venue.

The Fillmore sent a statement to the Revue blog this morning.

"After the band's final song, an apparently intoxicated individual on our property outside the venue claimed he had put a bomb on the property," the statement says. "Charlotte police apprehended the individual, deemed the threat non-credible, but nonetheless in the interest of safety a decision was made to end the show without an encore."

The Head and the Heart wrote their own statement following the show: 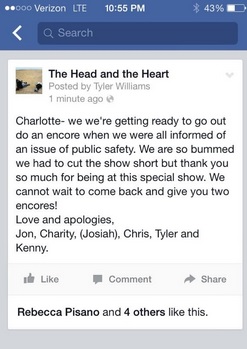 Singer Josiah Johnson did not perform with the band last night. In their statement, members placed his name in parentheses.