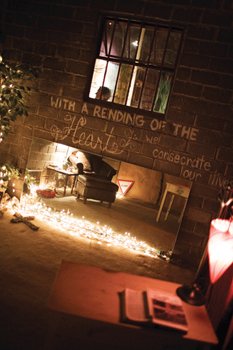 24-7 is part of a network that promotes urban prayers rooms around the world.

As gentrification continues in NoDa, it's the kind of neighborhood where cultural gems can be hidden. Such is the case of 24-7, an "urban prayer room" that opened nearly two years ago.

From the outside, 24-7 is an unassuming brick building. But upon entering, I was welcomed by a combination of tranquility, comfort, and creative expression in its purest form. Contemporary music played in the candle-lit rooms, lined with comfy furniture. Prayers were written in chalk on a purple brick wall, and individual spaces called "on ramps" encouraged people to talk with God though prayer, journaling, stillness, or painting. Modern art and personal liturgy adorned the on ramps while another area was dedicated to nations like Darfur. Various sections met the technologically savvy with free Wi-Fi and laptop connections.

Despite all of those things vying for my attention, I was captured by a sense of serenity. Christians might call it God's presence. Others could simply call it peace. Lisa Koons, director of 24-7, says it's both.

"24-7 is a comfortable and wildly creative place to pull aside, step out of the whirlwind, and get one-on-one time with God," says Koons. "Ninety percent of the people that walk through the door say they feel God's presence. Atheists recognize something special and call it peace."

24-7 is a local branch of an international network whose mission is to encourage people to pray continually (hence the name). With the help of 24-7 members and donations from churches, Koons transformed a vacant garage into a place of worship that draws people from all walks of life. Bankers from uptown visit during lunch, and the young and old can be found praying and communing. "People who visit 24-7 are all over the spiritual landscape, from church leaders to the nonreligious but spiritually curious," says Koons.

Social justice is another of 24-7's missions. A grass-roots movement called the Justice Project unites 24-7 with local churches and volunteers to serve Charlotte's declining neighborhoods. A recent seven-month effort led by 24-7 and about 200 volunteers brought the group to Optimist Park to carry out what Koons describes as "radical hospitality." Homes and cars were repaired, after-school tutoring sessions were held, and the elderly were served. Another project is planned for the Villa Heights community.

"We want to turn the tide of a generation back to friendship with God and involvement with issues of social justice," Koons says. "Our ultimate calling is to help people fly with God and crouch with the poor."

This article appears in the February 2008 issue of Charlotte magazine.
Categories: Buzz > Reality Check
Contest of the Month