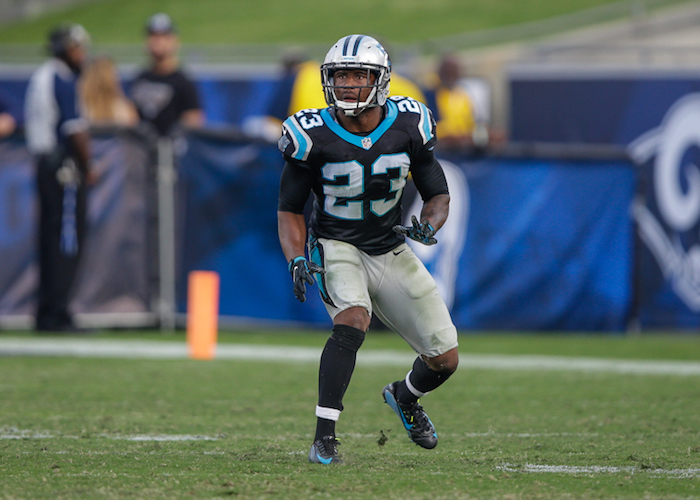 BV: Let's start with this from @Underwood_10_ on Twitter. He wants to know your favorite songs to listen to before a game.

LJ: My favorite pregame songs? Let me see. (Johnson looks at his phone) I listen to Jahmiel. "Great Man." And "True Colours" is a good song. Same artist, Jahmiel.

BV: Are you a Beat or Bose guy? Or none of the above?

BV: Even on the plane?

(Johnson yells a couple of lockers down to safety Kurt Coleman)

LJ: Kurt, every time you see me, what headphones do I have on? The little white ones, right?

BV: You've got to be one of the only guys in here who does that.

LJ: I think sometimes when you put the big stuff over your ears, people stop trying to communicate with you.

BV: Do you think we're too much of a technology-based society now?

LJ: In some sense, I believe that's true. But I think it's good. Technology has definitely enhanced society today. In some aspects, it takes away from getting to know people on a one-to-one basis. With so much social media now, I can know a person without even meeting them just off the stuff that they post. Then you meet the person and your whole perception changes about that person, the image that you had before you met them. So I think so. It's kind of double-sworded.

BV: You're not on social media much, are you?

LJ: I just got an Instagram a month ago.

LJ: I'm on a new team, I want to open up more, let people know more about me and let them see a little bit about my life.

If ever stripped from worldly things understand, the time we spend together is worth more than anything I could ever buy you. Parker A.

BV: What'd you think about it? It gets people in trouble.

LJ: It does, but I think it's a great way to promote yourself and brand yourself if it's done correctly. It depends on the person if it's managed the right way or not.

This article appears in the November 2016 issue of Charlotte magazine.
Categories: Panthers
Contest of the Month