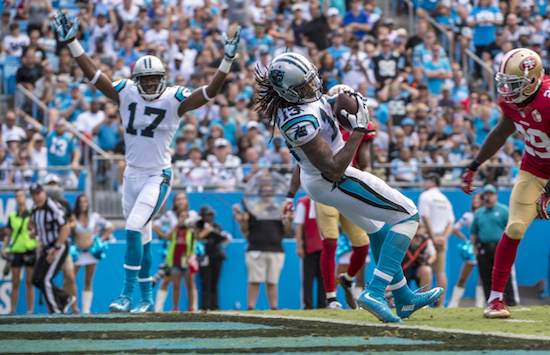 BV: Let's start with this from a fan. Parker Stone wants to know your barbecue preferences.

KB: Oh, I can't think of the name that's over there in Mint Hill. What's the name of that place?

KB: I like everything. Their barbecue's fine. They have these homemade sauces they put on it. Oh my gosh.

BV: You're a big gamer, right?

KB: XBox One. Probably the most underrated game that you probably won't think I'm playing is SMITE.

KB: It was a computer game, but it just came to the console.

BV: Philly (Brown) talks a lot of trash about gaming. Is he any good?

BV: So who in here do you play?

BB: Ask him who the best FIFA player is.

KB: Me. And I play with Argentina. These guys play with club teams and they still can't beat me.

BV: You know old school Nintendo? They had a game called Ice Hockey where you only got four guys.

BV: Yeah, you're way too young to remember. Anyway, you could choose from fat to medium to skinny, and those guys were the fastest but couldn't shoot as hard.

BB: He would go skinny all day.

KB: You got to. Speed kills.

Third Down – Pardon the Interruption

DB: But you're not even fast.

KB: I did not beat you off the ball?

DB: You might have beat me off the ball, but when you …

BV: Are you into movies?

BB: He made me watch "Warcraft." That was trash.

KB: That was trash. Favorite movies are hard. That's tough.

BV: Do you go out to see them?

KB: I think it's called Carolina Cinemas. They have La-Z-Boy chairs in there.

BV: And what kind of movies are you into?

KB: I'm all over the place. Horror.

BV: Have you seen all the Screams? Or are you too young?

KB: Yeah. They weren't all that scary.

BV: No, but they have their moments.

This article appears in the October 2016 issue of Charlotte magazine.
Categories: Panthers
Contest of the Month