And how this southwest Charlotte neighborhood reflects the city's broader growth

North Carolina Senator DeAndrea Salvador grew up in the Steele Creek neighborhood of southwest Charlotte. Two and a half decades ago, she’d ride to Steele Creek Elementary with her grandmother, a teacher’s assistant. The pair would traverse two-lane roads, passing cows and horses in open fields and not a single traffic light. The area was just 14 miles from uptown but felt light-years away from the city.

As you drive around Steele Creek today, you occasionally see an open plot of land, but warehouses, businesses, shopping centers, and new-build subdivisions have filled in most of them. Carowinds and its surrounding hubbub hug the southeastern boundary. Charlotte Premium Outlets lies to the north, and Westinghouse Boulevard, the warehouse-lined spine of Charlotte’s industrial area, runs through the center. Shopping centers are scattered throughout, like the RiverGate development at South Tryon Street (N.C. Highway 49) and Steele Creek Road, with more than a dozen restaurants and three dozen shops. No cows or horses to be found.

“While there are still distinct elements of Steele Creek that are the same,” says Salvador, referring to schools, McDowell Nature Preserve, and other community assets, “it’s so much more dense.”

Steele Creek reflects how much and how quickly Charlotte has grown, especially near the Interstate 485 loop, which was finally completed in 2015. About 5,000 people lived there in 1990, the year Salvador was born, according to the Urban Institute at UNC Charlotte. At the time, she says, most of them belonged to families, like hers, that had lived there for generations. By 2000, the neighborhood’s population had more than doubled, to 10,109 people. The population rose to 28,076 in 2010, to 45,355 in 2020.

“Everybody finds themselves here for a different reason,” Salvador says. Until the boom of the last three decades, Steele Creek was a place where you could live a quieter, more rural life with relatively low housing costs but still near Charlotte Douglas International Airport and natural features like Lake Wylie.

Dave Wiggins, who maintains the Steele Creek Residents Association website, moved to the neighborhood in 1999 to live near the U.S. Census Bureau office, off Arco Corporate Drive, where he worked as a geographer for almost four decades. He retired in 2012. But he’s since spent countless hours tracking the neighborhood’s growth and updating the website, where he’s published about 800 articles on geography, population, history, development, recreation, events, and more. He tracks and posts every rezoning petition in the area, and he uses mapping software to make detailed maps of the neighborhood. His fellow association member, Charles Wilkerson, moved to Steele Creek the same year as Wiggins. Charlotte-Mecklenburg Schools had just redrawn its district lines, and Wilkerson wanted his kids to remain at Olympic High School. Today, Wilkerson owns Steele Creek Printing and Design and is the president of the Arrowood Business Association. (He’s also a Santa Claus-for-hire.) 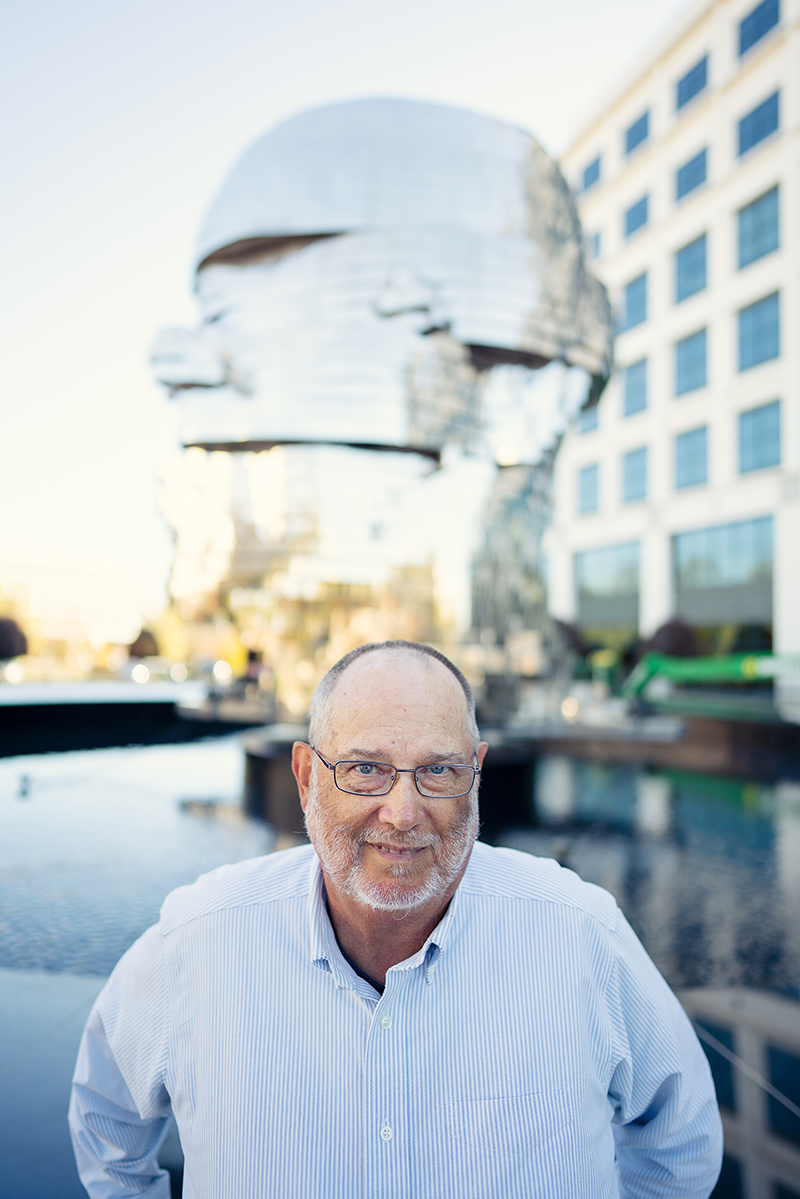 Dave Wiggins (above) could see “Metalmorphosis” from the U.S. Census Bureau office where he used to work. The Buster Boyd Bridge (below) spans Lake Wylie across the state line. 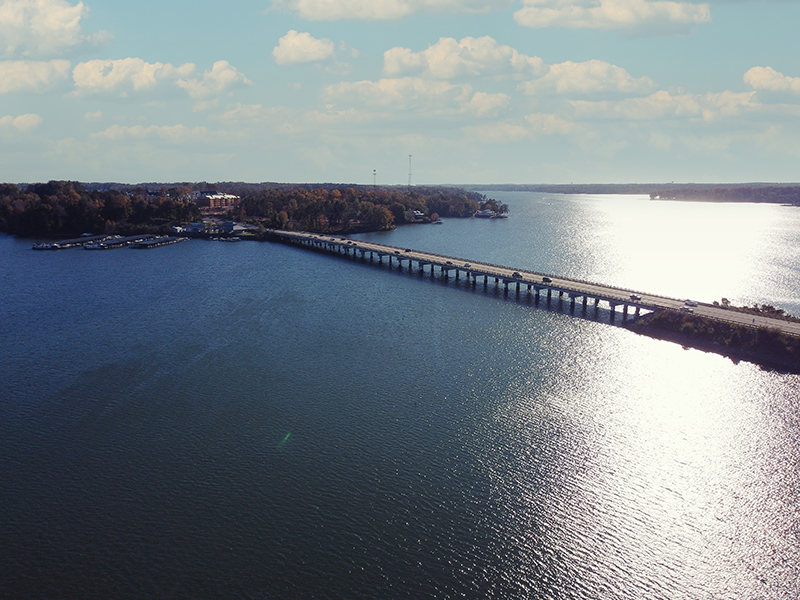 Salvador moved away for college and her first few post-college jobs. Once she had kids, though, she wanted to be close to her family again. She was also attracted by Steele Creek’s growing diversity. Steele Creek’s population was 79% white in 2000. Twenty years later, it was 39% white, 32% Black, 16% Latino, and 8% Asian.

“Today, on my own block, there’s a Black family, a white family, an Indian family, a Vietnamese family,” says Salvador, elected in 2020 and the youngest Black woman ever to serve in the state senate. “There’s a shared experience. We may give our neighbors some cookies, and they might bring us some traditional dough fried rolls that they make. There’s a celebration of each other’s cultures in a way that’s very natural.”

Growth, though, brings inevitable complications: traffic congestion, school overcrowding, and rising home prices in a neighborhood once prized for its affordability. In 2019, the average home sale price in Steele Creek was $334,736, which, for the first time, surpassed the Mecklenburg County average.

The N.C. Department of Transportation has widened Highway 49 and the Buster Boyd Bridge, which spans Lake Wylie across the state line. But the road work hasn’t kept up with the growth, Wiggins says. Today, the NCDOT plans to widen N.C. Highway 160 and add roads and extensions, but state budget deficits have delayed the projects. As of November, the Highway 160 widening wasn’t set to start until 2027.

Steele Creek schools are as congested as its roads. CMS opened a new high school, Palisades, which welcomed 1,700 students—most of them overflow from nearby Olympic and Harding University high schools—on its first day in August. But Steele Creek will need more than one new school if growth continues.

“Palisades was a relief school that should’ve been built, easily, almost a decade ago,” Wilkerson says. “We’ve yet to figure out a way to improve schools at a rate that stays either equal or ahead of the growth of the population. And when you shortchange a student, they don’t get a chance to make that up.” Under his leadership, Arrowood Business Association gives away two college scholarships and several teacher grants per year. 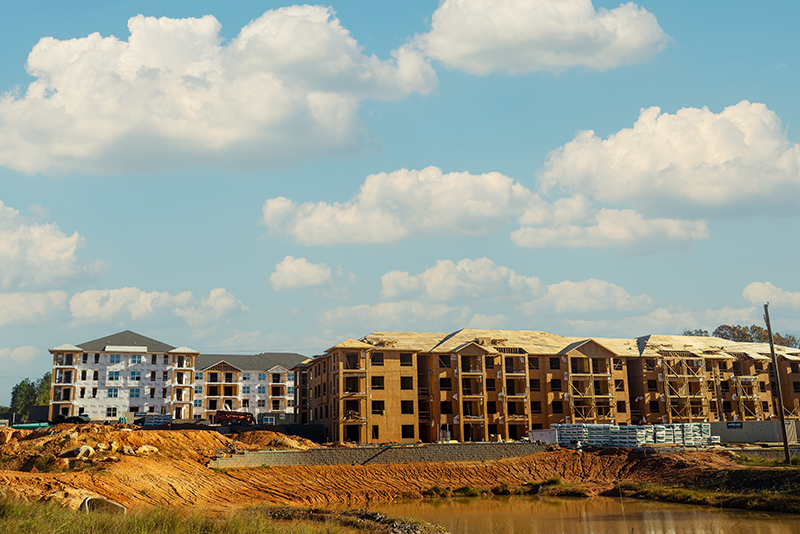 Palisades High School (below) is next to homes off of Grand Palisades Parkway. The area, like much of Steele Creek, continues to grow with new home construction. 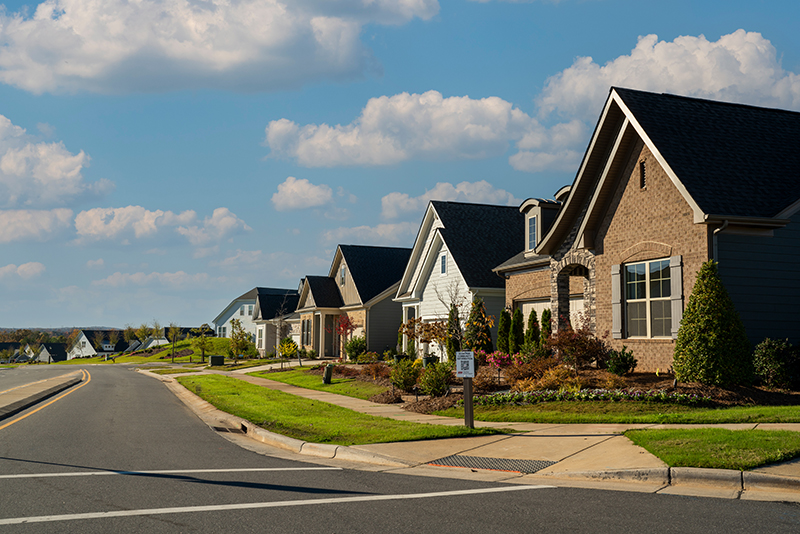 Rapid growth has a way of eroding community cohesion, too. In the early 1990s, Craig Bollinger moved from Myers Park, where he was the associate pastor of St. Mark’s Lutheran Church, to Steele Creek to develop a new multi-denominational church, Christ the King Church.

“As we’ve watched this community grow up, what we were seeing was the lack of opportunity to meet, gather, and form community,” Bollinger says. “I mean, you have little coffee shops and things like that around but not a place for people to come without having to buy something.”

His solution: Christ the King Church, in conjunction with The YMCA of Greater Charlotte and Javesca Coffee, is building a 7,000-square-foot community center, set to open in March, called Steele Creek Community Place. It will include a large indoor playground; spaces for work, meetings, and events; and, for those who do want coffee, a café. An outdoor area will have recreational spaces and a playground. The church owns the land and buildings, but the center is its own nonprofit organization and open to everyone.

Salvador attended a fundraiser for the center in October, and she’s excited to live and work in a community that’s still finding itself. “In a way, Steele Creek is experiencing the same things Charlotte as a whole has experienced,” she says. “I think there’s a lot of opportunity still to write the neighborhood—like, to create the neighborhood collectively, in a manner, from scratch.”

Fun fact:  In July 2011, The Charlotte Observer published a list of “The Seven Wonders of Charlotte,” which included sites like Charlotte Motor Speedway, Queens Road West, and the rapids at the U.S. National Whitewater Center. Another is in Steele Creek, and you have to search for it: A 25-foot, 14-ton, motorized, rotating sculpture called “Metalmorphosis” sits atop a reflecting pool tucked away in the Whitehall Corporate Center business park. The sculpture, which sadly is often under repair, was created by Czech artist David Cerny in 2007 at the request of the business park’s developer, Count Riprand Arco.