From Pen to Pan: The Story Behind Milk Glass Pie

Keia Mastrianni writes about food and agriculture, but her love language is baking pie 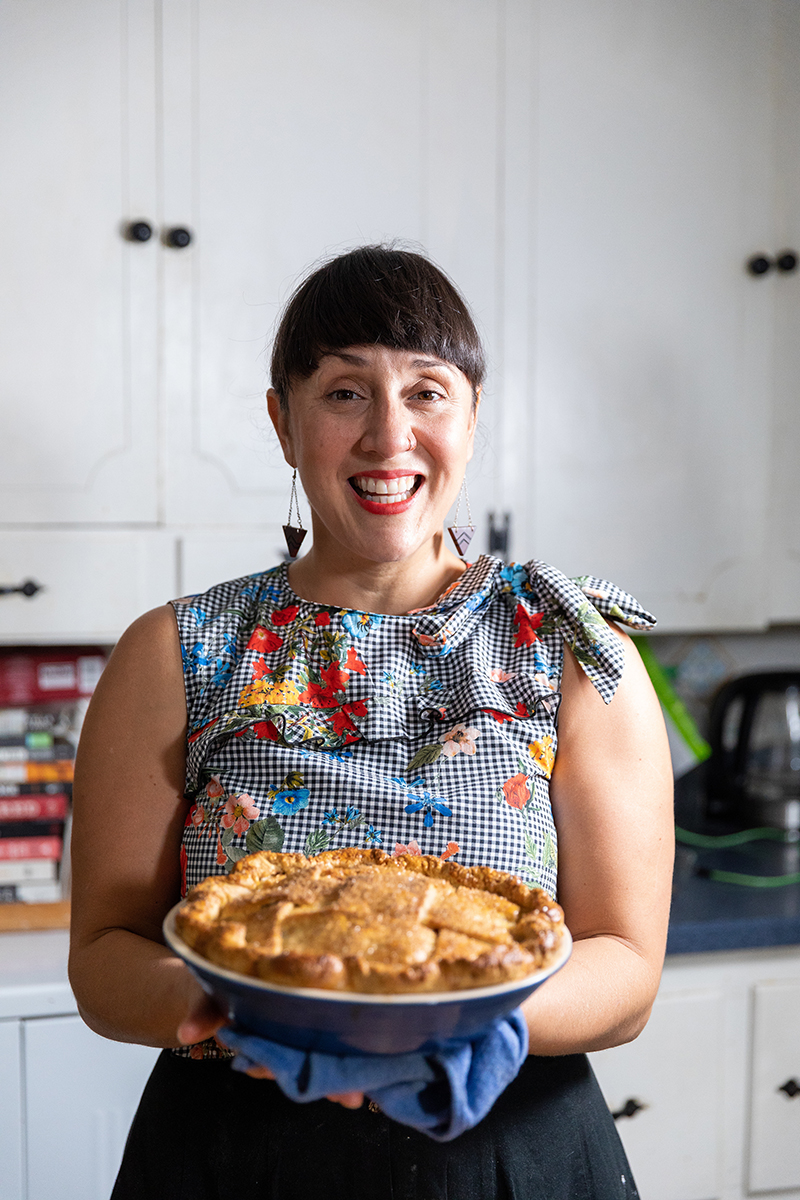 “NOBODY IS PISSED OFF when there’s pie around.”

Wise words from a woman who would know. Keia Mastrianni is a longtime local food writer who has built a career examining agriculture, social issues, and where they overlap. Her stories have appeared in Local Palate, Bon Appetit, Edible Communities, Modern Farmer, and Charlotte magazine. Now she’s parlaying her baking hobby—and side hustle—into a small-batch pie business called Milk Glass Pie.

Mastrianni bakes out of her home in Shelby, and on some days she’ll spend 15 to 17 hours in the kitchen. “Those are my holiday baking hours,” she says. “This morning I was on the farm working with my partner (Jamie Swofford). I’ll write this afternoon, then get in the kitchen this evening.”

Her passion for pie, born out of her food writing, gained momentum five years ago when she was on assignment at Carolina Flour Mill in West Asheville. “I found (baker and author) Tara Jensen through the rabbit hole of a story I was working on,” Mastrianni says. She took one of Jensen’s classes at Smoke Signals, the bakery she owned at the time in Marshall, a mountain town about 20 miles north of Asheville, and says it was the nudge she needed to make more pie.

She started with a pop-up inside FROCK Shop on Central Avenue in 2014, offering a few fruit pies and some savory options like potato, gruyere, and thyme galettes. Close to 30 people came in just a few hours. Word got out. She continued to hold five to 12 pop-ups a year, and in 2018 she tested out a subscription service: People could pick up a pie every week for three or six weeks. She advertised only on Instagram and sold her pies for $28 to $32.

Today, Not Just Coffee sells Milk Glass Pies, and you can find them at Free Range Brewing on occasion. She also has regular flash sales that she posts to Instagram
(@milkglasspie). Don’t expect the same flavor week after week, though. “I live within the seasons,” she says. “Whatever is happening right now is what I’m making.” 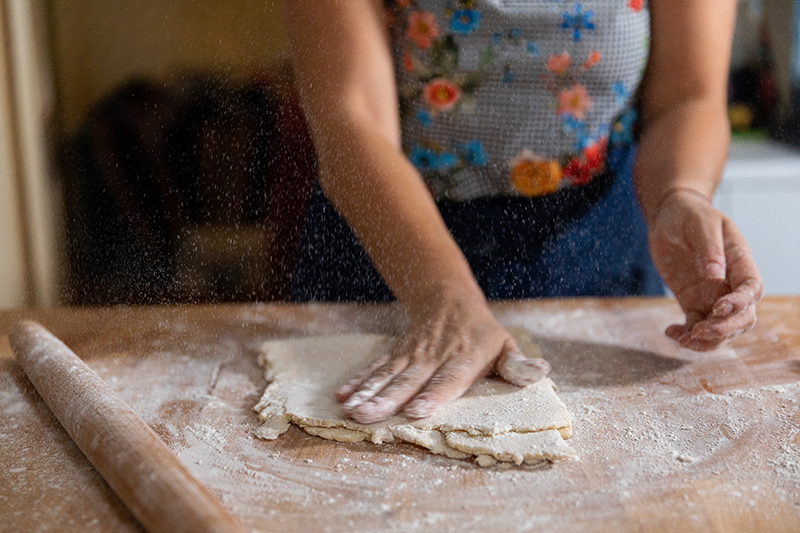 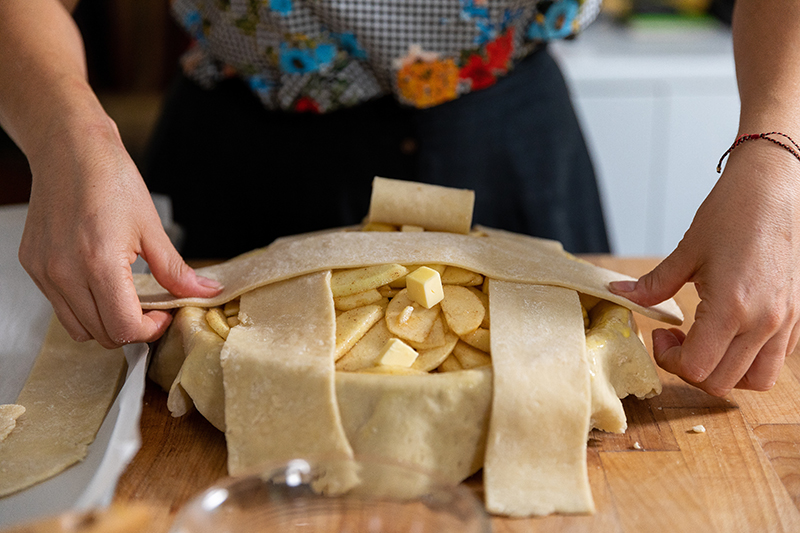 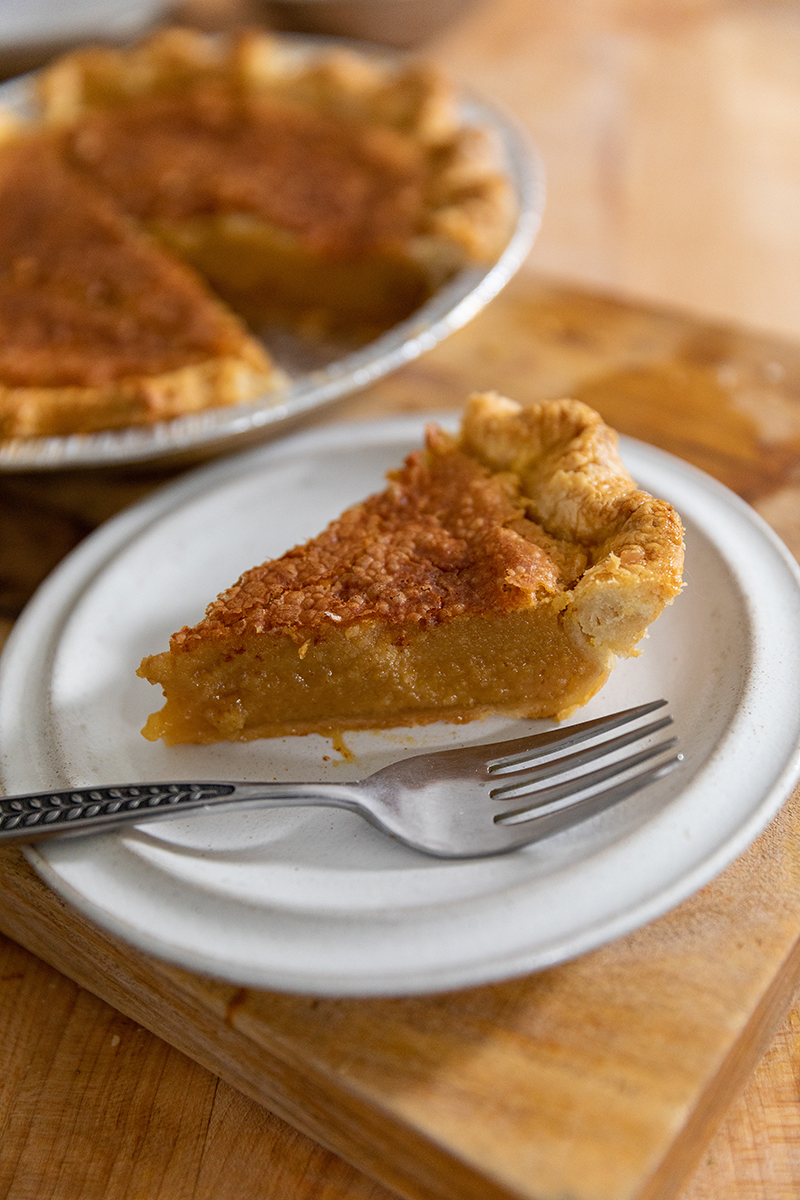 (Top) Mastrianni weaves a crust for her traditional apple pie. (Above) For fall, she bakes brown sugar buttermilk pie.

Fresh fruit pies are her favorite, especially lattice, double-crust pies, but she’ll try any recipe once. Muscadine pie with a rye crust, old school buttermilk pies, chocolate chess pie—she’s baked them all. She also collects cookbooks; a favorite is the Farm Journal’s Complete Pie Cookbook, originally published in 1965. “I always wanted to learn how to master pie crust. It fed my soul in a way. Making something from scratch for somebody with love is a wonderful feeling. And it just makes people really effing happy.”

For fall, she makes sweet potato pie, heirloom squash pie, and maple buttermilk pie. Sometimes she’ll bake with vinegar from Swofford, a.k.a. “The Chef’s Farmer,” who makes vinegar-based beverages for his line, Old North Shrub. “I often use (vinegar) in place of citrus in a traditional pie,” she says. “I pull from traditions but use modern things to add flavor.” Her red-eye pie, for example, is a classic coffee and chocolate pie with the syrup of Not Just Coffee’s cold brew.

She continues to write, too. Mastrianni recently contributed a recipe to Rage Baking: The Transformative Power of Flour, Butter, Sugar, and Women’s Voices (Tiller Press, February 4) by Katherine Alford, senior vice president of culinary for Food Network and Cooking Channel, and Kathy Gunst, the James Beard Award-winning journalist. “It’s a cookbook with recipes from activists, writers, and bakers, baking through this tumultuous political time,” Mastrianni says. Notable names like Ruth Reichl, Carla Hall, and Cecile Richards channel their frustrations through a common comfort. “I came to baking at a tumultuous time in my life,” Mastrianni adds. “It was a tangible way to connect with something real, meditative, and honest.”

This article appears in the November 2019 issue of Charlotte magazine.
Categories: Food + Drink