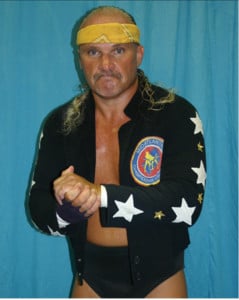 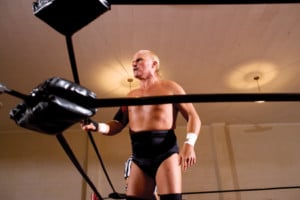 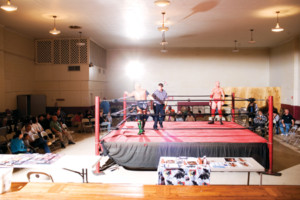 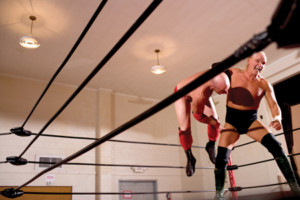 "Tackle. Two-count. Back to the lockup. Up and over." Squatting in the corner of a wrestling ring that's surrounded by blister-packed action figures of pro wrestlers stacked floor to ceiling, George South rattles off instructions with the focus of an NFL quarterback and the speed of an auctioneer. Two fledgling wrestlers in the center of the ring do what he says, booms and splats echoing off the walls.

"Headlock. Takeover. Pick him up, please," he continues, always with a "please." "Remember, the higher the better. Cedric, butterfly suplex."
Cedric Johnson, twenty, who's been training with South for six months, holds his opponent horizontally over his head, then drops him to the mat with a heavy whoomph. "Do it again. I want more up and down than straight out."

"When I started there was nothing like this. It was so secretive," says South, forty-seven. South took wrestling seriously as a kid. "I'd go to the Park Center [now Grady Cole Center] and help the rasslers carry their bags in. I had it bad. I was about twelve years old and Ole Anderson won this belt and got on TV and said, ‘This belt don't mean nothin'. I'm going to throw it in a dumpster.' Well I got on my bicycle and rode around Charlotte for two weeks look- ing for that belt."

When he was eighteen, South answered a newspaper ad that read "Be a 'Rassler."

"I go to this old building. It looked like something out of a scary movie. The windows were broke out of it. I opened the door and it fell off the hinges. They had an old ring set up like a Rocky movie and there was a big Samoan, an old guy, and a midget," South recalls. "They beat the crap out of me, tore my clothes and left me over in the corner with my britches split. I was pulling myself up and I saw the midget coming … he kicked me as hard as he could right in the stomach. For some stupid reason the next day I came back. A week later I had a match."

South wrestled for NWA during the 1980s and counts a televised twenty-minute match against Ric Flair as his personal favorite. "People on the street remember that match. It wasn't just one-sided, and that's what made it interesting. The biggest compliment I get is when people say, ‘For a moment I thought you were going to win.' "

South, a married father of five who lives in Concord, remains a fixture at matches through the region. He's spent the past five years training wannabe wrestlers, including second-generation talents Reid Flair (son of Ric) and Ricky Steamboat Jr., in the back room at the offices of HighSpots, an online store for all things pro wrestling. He and his students will set up the ring almost anywhere — birthday parties, NASCAR races, church parking lots.

"I still love packing my bag to go on the road," he says before firing off the last round of moves for the night. "Tackle. Drop down. Hip toss."