Shooting range allows you to be commando for a day 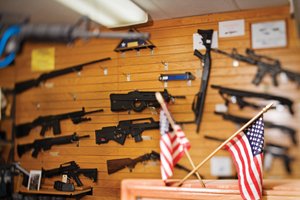 More than 50 different rental guns are available at the shooting range. – Chris Edwards

I stare down the shady-looking character with the bad haircut who’s leveling his pistol right at me. Cool as a cucumber, I line him up in my sights. I squeeze the trigger and let loose thirty rounds in just over two seconds, all but obliterating the scumbag.

Although I've never been much of a gun guy, when I discovered there was a place called Shooters Express in Belmont, where you could go and fire submachine guns, my testosterone got the better of me.

Situated just off I-85 between two dilapidated gas stations, Shooters Express is a full-service gun store that has one of the largest indoor shooting ranges in the state. Diana Branch, range manager and a seventeen-year veteran of Shooters, with a syrupy Southern accent and big, frosty hair, shows me a brief safety video and then presents me with an MP5 9 mm submachine gun. "It's the same gun the SWAT team uses," she informs me.

We don eye and ear protection as Branch leads me into the shooting range, which has a dozen partitioned shooting bays. She demonstrates with practiced ease the proper way to load and fire the MP5. The weapon only weighs about five pounds, and it feels almost like a toy. I load the thirty-round clip, and snap it into place. The safety switch has three settings—semiautomatic, three-round bursts, and fully automatic. I set it for semiautomatic and assume the classic shooter’s position, with left foot forward, stock braced against my shoulder, and cheek pressed firmly to its side. I take aim at the nasty guy on the paper target and squeeze the trigger. There's little kick as the gun fires a single round with a muffled pop and small burst of smoke.

"Set it on fully automatic," Branch says. "It'll give you a thrill."

I take aim and, before I can blink twice, unload nearly thirty rounds. I load up and blast away again, then again. In no time I've gone through 100 rounds. It's almost like playing a video game. And that's kind of scary.

The range rate is $15 per hour. If you want to give it a shot, visit www.shootersexpress.com for more details.

This article appears in the November 2007 issue of Charlotte magazine.