LONG BEFORE Theresa Nardi and Marc Cahail purchased their Plaza Midwood home in 2004, the couple had a vision for how the landscape would look.

Together, they worked until their vision was rooted in their backyard with carefully placed trees and plants. When Cahail passed away last fall, memories of him remained in those very roots. 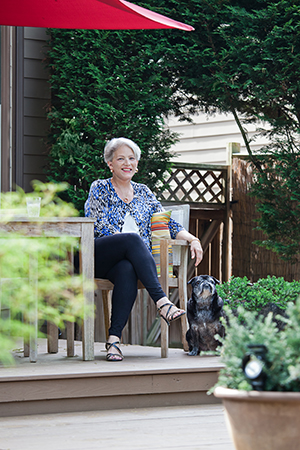 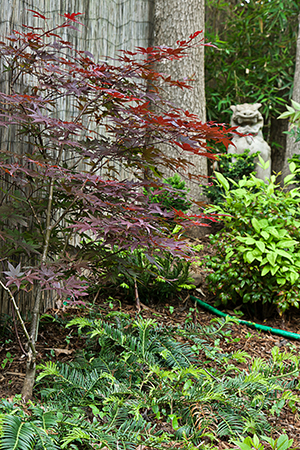 (Top) Theresa Nardi and her pug, Zeus, look out on the Japanese-inspired garden from a multi-tiered deck. (Below) Behind the Japanese yew groundcover grows a Hefner’s Red Select maple, bred to tolerate the heat of the Southern climate.

Nardi and Cahail met while working in international shipping and often traveled to the Pacific Rim. The transplants from San Francisco wanted to create a Japanese garden reminiscent of their favorite gardens in the Pacific Northwest.

“There is a great deal of Asian influence on the West Coast,” Nardi explains. “We wanted to create a garden that was evocative of our past and made a statement about our aesthetic.”

The original landscape of the home could not have been further from their vision: The compact front yard was a mixture of grass and overgrown crepe myrtles; the steep slope in the backyard was covered in dirt and the main focal point was a jungle gym. Undeterred, the couple created a plan for transforming the bland space into a landscape teeming with color, texture, and architectural interest.

“One of the most fun parts of the project was addressing the challenges,” Nardi says. “We wanted the design to make a statement in a compact area without relying on annuals and perennials for color.”

In the front, the couple replaced the grass with winding gravel paths designed to resemble a stream and accented the hardscape with islands of beautiful but understated plantings of yews, pieris, and black mondo grass; spirea, Siberian iris, and daylilies add seasonal color.

The addition of several large boulders created architectural interest, and granite pavers were installed to make it easier to navigate the sloping terrain.

Nardi planted several varieties of shade-loving hostas beneath a cryptomeria that was part of the original landscape. In fact, she salvaged a handful of the original plantings, including several mature river birch and sweet gum trees, because their broad canopies provide much-needed shade in the yard.

Just inside the back gate, a “seiryu” Japanese maple cascades overhead, creating a dramatic canopy leading into the backyard.

To deal with the steep slope, Nardi and Cahail installed a dry riverbed that is both beautiful and functional, as well as tiered decks with bench seating that provide additional level space for entertaining.

“We see the backyard as another room in the house,” says Nardi.

Along the back perimeter of the yard, an ornate Asian-inspired fence serves as the focal point of the landscape. Nardi commissioned a local artisan to build the fence based on a picture she found in a magazine. At her request, the design includes shelves attached to one of the support beams that are used to display the bonsais that Cahail lovingly created.

The centerpiece of the garden is the collection of Japanese maples, each one different from the next. Cahail collected the exotic species, and 35 of them are artfully arranged throughout the garden.

“Collecting Japanese maples is an obsession,” Nardi says. “You find one you have to have, and you end up moving things around to make room for it.”

The couple often traveled to Mr. Maple, a nursery in Flat Rock that specializes in unique cultivars of Japanese maples, to seek out new specimens for their garden.

Throughout the landscape, Nardi selected low-maintenance plants and integrated understated pagodas, Foo lions, and a water feature with the trees, shrubs, and perennials. The result is a cacophony of color and texture that is vibrant throughout the year.

In the spring, the landscape comes alive with verdant foliage in shades of yellow and green; the warmth of orange, red, and amber dominate the garden in the fall. It’s the ever-changing view that keeps the scenery interesting.

While it’s an Asian-inspired garden, the couple wanted to give a nod to their new North Carolina home by adding an azalea garden that bursts with color in the spring.

“Most of the interest in the garden comes from different colors, textures, and varying heights,” Nardi explains. “One of the things I love most about a Japanese garden is its subtlety.”

Because the space is compact, Nardi was careful to honor the somewhat spare aesthetic of a traditional Japanese garden. To achieve this, gravel surrounds several of the plantings, adding texture while creating a visual separation in the landscape.

“Marc used to love going into the garden to rake the gravel; it was something that gave him great pleasure,” she says.

It took 10 years to complete the landscape project—although Nardi confesses that she’ll never truly be finished with the garden—and, over time, the formerly uninspiring yard has been transformed into one of the prettiest gardens in the neighborhood. For Nardi, the garden is about more than aesthetics, it’s a reminder of her late husband.

“Gardening was a mutual love affair,” she says. “When I’m in the garden, I think about Marc.”

This article appears in the June 2015 issue of Home + Garden.
Categories: Feature