Find a crowded place. Busy restaurants with heavy traffic tend to turn over their fish more quickly, which means you’re unlikely to get served stuff that’s been sitting around for days. It’s far better for a sushi chef to run out of fish at the end of the night than have some left over—so it’s a good sign if they’re occasionally out of exactly what you want. 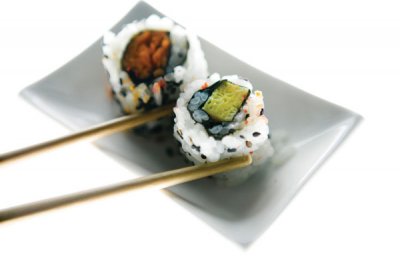 Find a crowded place.
Busy restaurants with heavy traffic tend to turn over their fish more quickly, which means you’re unlikely to get served stuff that’s been sitting around for days. It’s far better for a sushi chef to run out of fish at the end of the night than have some left over—so it’s a good sign if they’re occasionally out of exactly what you want.
Don’t go on Sundays. Around the world, fish markets and wholesalers tend to shut down on Sundays—and here even Saturday deliveries are rare—which means the fish served at Sunday dinner has likely been sitting around the restaurant for a few days.

Saddle up to the bar.
Not only do you get a great view of your chef at work, but you set yourself up for access to the best stuff he or she has. Chefs attentively sort the pieces as they take apart a whole fish into loins and then into individual servings, and they know what’s going where. If you’re at a table in the dining room: out of sight, out of mind. “For whoever is eating at the sushi bar we can directly pay attention to what they eat,” says Joanna Nix, chef and owner of Nikko. “I get to know them and what they like, what they’re looking for. That’s how I create their plate.”

Talk to your chef.
Your chef is the curator of the perfect sushi meal, so pick a seat in front of the person you want to serve you and start chatting him up. Think of a sushi chef as a combination bartender/cook, and the social element is part of their training. Some head chefs even require their apprentices to read the newspaper daily so they’ll have something to discuss with customers. Showing that you’re interested in what they serve—and being attentive to the differences between fish—may encourage your chef to treat you to something special. The simplest way to start a conversation over the bar: “What’s good today?”

Know where you are.
In the fish markets of Japan, “North Carolina” is a brand name. Everyone knows about the fishermen who come from around the country in November through January to hunt bluefin tuna off the Atlantic Coast. The fish they catch are the last of the American season and are much desired by auction buyers in Japan, where chefs regularly spend more than $100 per pound for the fatty belly cuts of toro from the Carolina catch. During the winter, ask your chef if there’s any North Carolina bluefin in his case.

Easy on the soy and wasabi.
If you’re trying a new fish, use the condiments sparingly at first. Both are such dominant flavors—the saltiness of the soy and the heat of wasabi—that they can easily overpower the fish and make everything in front of you taste exactly the same. Place a few drops of soy in the small dish in front of you and gently dab a corner of a piece of sushi, fish side down, instead of slathering the whole thing or just soaking the rice.

People have been eating California rolls for as long as they’ve prized toro. Today, spider rolls and rainbow rolls are so trendy in Japan that they’ve inspired a new Tokyo restaurant genre: “New York-style sushi.” Sushi was considered a fast food in nineteenth-century Tokyo, sold out of stalls on the street, well before it was found in expensive indoor restaurants. So when sushi inevitably becomes available at your local NASCAR track (it’s already being served at Phoenix International Raceway, in Arizona) don’t hesitate—just dig in.

This article appears in the Home & Garden June 2007 issue of Home + Garden.
Categories: Home & GardenDepartments
Contest of the Month