Why aren't we outraged at the greedy banks for the state of our city and our economy? Because we let them do it to us 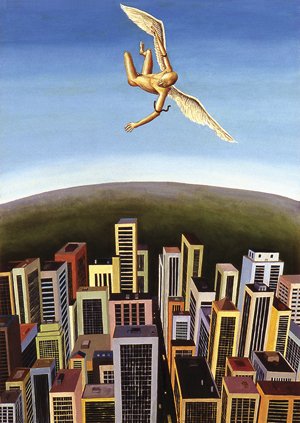 Charlotte, which once boasted of being the nation's second-largest banking center after New York, now has a new distinction: we well could be the nation's premier loser in the financial sector meltdown.

Sure, New York has the hat-trick disasters of AIG, Lehman Brothers, and Citigroup. But while a number of New York investors lost their shirts in those collapses, they represent a much smaller percentage of the population than the number of Charlotteans who were all but wiped out by the decline of Bank of America and Wachovia.

And when you add in the local people who were bilked by Bernie Madoff's $50 billion Ponzi scheme and the investors who switched their wealth management accounts to the Stanford Group three years ago only to see their assets locked up by the court in February, the number of people and the amount they lost is staggering. The Associated Press quoted Charlotte Chamber President Bob Morgan as saying, "We don't know what the city is going to look like once we emerge. We do know that tremendous wealth has already been lost."

Tremendous wealth has been lost. As have jobs. As have civic pride and even self-respect.

So here is the puzzlement: given all that we have lost individually and collectively, why aren't there demonstrations daily in front of Bank of America's phallic downtown tower? Why no gatherings at the private hangars where Wachovia's fleet of corporate jets are housed? Why no chorus of indignation on talk radio? No wailing, no moaning, no gnashing of teeth?

In short, why is there so little outrage?

I think it is because as mad as we are, we are hurt even worse.

Bernie Madoff is a New York sharpie and Robert Allen Stanford is a Texas two-stepper. In our guts, we know that dealing with them and their ilk is just asking for trouble. But Bank of America's Ken Lewis and Wachovia's Ken Thompson are our neighbors. They are one of us. Lewis is from Georgia and Thompson from Eastern North Carolina. They spent their entire careers at their respective organizations, just like their mentors, Hugh McColl and Ed Crutchfield. You can see these guys at Harris Teeter and Jesse Brown's Outdoors. While they have vacation getaways in desirable locations, all four make their homes here, in Myers Park, Eastover, and Piper Glen.

And the rest of us enjoyed the rivalry even as we were adding their stocks to our portfolios. When the staid New York business community looked askance at McColl's practice of giving crystal hand grenades to recognize superior performance of staff members, we just smiled. And when the national media made fun of Crutchfield's habit of putting out his cigarette in his coffee cup, then drinking the coffee, we laughed because the joke was on them.

After all, McColl and Crutchfield were turning the banking industry upside down. Through scores of acquisitions, the banks grew into national names in a matter of years. As the banks grew, so did the businesses and professions that supplied them with services. Law firms, accounting firms, builders, computer professionals, architects, home builders—the list of companies that fed off the banks included people from every neighborhood in town. We were all getting rich, or at least we hoped to.

And as long as the ride was great, we were willing to play along. What is now viewed as wretched excess on the part of bankers, financiers, and stock touters was then seen as merely the evidence that Charlotte was arriving as a "world-class city."

Company-owned airplanes went from one or two six-seat propeller-driven jobs to fleets of private jets with leather upholstery and well-stocked bars. Private dining rooms at the top of skyscrapers served the best food in town to their executives and invited guests. For a time, Bank of America featured signature dishes from each of the private dining rooms of the banks it had acquired, a form of gastronomical arrogance.

I remember flying to Raleigh on one of First Union's corporate jets in the mid-1990s to give a presentation. When we returned to the airport, we found that a senior executive had sent our plane to New York to pick up his wife before a threatened snowstorm blew in. Not to worry, though. Another corporate jet was being flown in from Florida to get us. At the time, we found neither action to be out of line. The bank was making so much money, who could begrudge a senior executive's personal use of the plane? And why should we have to stay overnight in Raleigh or (heaven forbid!) fly back commercially, when another jet could be there within the hour? It all just seemed to be part and parcel of the success.

When first Crutchfield and then McColl retired, we welcomed the successors, secure in the knowledge that these guys could run the banks McColl and Crutchfield had built. And for a while they did, following the McColl-Crutchfield method of growth through acquisition.

Sure, there were raised eyebrows when Thompson paid $24 billion for California-based Golden West Savings. While the housing market hadn't quite peaked, many thought they saw the end in sight, but were mollified by Thompson's assurances that the mortgages he was buying were solid and the entrée into the lucrative California market was a bargain.

And there were sotto voce questions about Lewis's ability (or anyone's ability, for that matter) to run an enterprise as sprawling as Bank of America had become. In addition to traditional banks like LaSalle in Chicago, Lewis was also getting into the mortgage business in a big way by purchasing Countrywide Home Loans.

So when things started to unravel last year, a lot of us in Charlotte were willing to give the Kens the benefit of the doubt. Even when Thompson was ousted by his board, the outrage seemed more about his firing than about his company's performance. Many people wanted Wachovia to stay independent rather than merge with Wells Fargo, in part out of pride and job security, but also in the hopes that a recovering Wachovia would soon be worth more than the $10 a share Wells Fargo was paying. But as Bank of America struggled to stay independent and its stock sunk below $3 a share earlier this year, Wachovia investors began to think maybe they hadn't done so badly after all.

If it is true that misery loves company, then we are all feeling a lot of love. The prosperity that once touched every neighborhood has turned into anxiety and fear as layoffs, closings, and bankruptcies mount.

Maybe it is this anxiety and fear that keeps our outrage in check beyond some perfunctory lawsuits. Or maybe it is the bittersweet knowledge that no matter how badly we have it personally, we know of someone else who has it worse.
Or maybe it is the fact that having ridden on the coattails of our high flying neighbors for so long, we are reluctant to turn on them too harshly. We never said, "Stop, turn around," as they flew closer to the sun. Now that their wings have melted off, who are we to complain that they have let us down?

Kenneth S. Allen, president of The Allen Agency Communications Inc., is a former editor of this magazine. Before that he worked in corporate communications for First Union Corporation, a predecessor of Wachovia.

This article appears in the April 2009 issue of Charlotte magazine.
Categories: Opinion, Perspective, The Buzz
Contest of the Month