Meet the Superman who cleans windows

Window cleaner Dayne Whitesides, a 22-year-old from Rock Hill, knows he’s doing a good deed for the sick kids in Charlotte hospitals when he wears a costume to work. Patients, doctors, and hospital workers press their faces against the glass to catch a glimpse of the employees of Joffie Contracting Services dressed as Superman, Batman, Mr. Incredible, Captain America, and Spider-Man. The superheroes harness up and rappel down the sides of the  building, cleaning windows and  collecting smiles as they go.

I looked for jobs in Charlotte 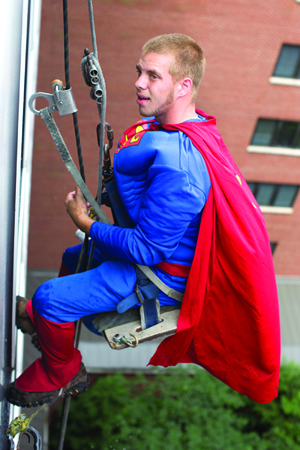 because there’s more money in the city, so I applied for this job, and I’ve been doing it for about eight months now. I like it because it’s easy. You don’t have nobody breathin’ down your back all day. I get to the shop in the morning, help load up the trucks with all the equipment, and put on my Superman costume if we’re cleaning the windows  at a hospital. I’m always Superman; he was my favorite growing up.

On the weekends, I race cars [on dirt tracks]. I’m an adrenaline junkie, so the heights don’t bother me at all. The tallest building I’ve ever done was 33 stories, and the only time I get nervous is right before I go off the roof ledge—and then I’m fine. One time, though, I slipped off the roof of a building, but my safety harness caught me. This job isn’t for everyone because of the heights; you gotta be a little crazy to do it.

The only time I get nervous is right before I go off the roof ledge—and then I’m fine.

I know I’m doing the right thing  when I put on the Superman suit because I bring joy to the kids who are sick, and when they see me, they really think I’m Superman. Yesterday, we were cleaning the windows on the inside [of Presbyterian hospital], and there was a kid in the room who wanted to clean the window for me, so I held his hand with the mop and squeegee, and I cleaned it with him. The adults see us and they tell us that they appreciate what we’re doing for the kids. My whole family thinks it’s nice that I’m doing this. They don’t mind the job I have as long as I like it and I’m having fun.

When we were at Levine Children’s Hospital, we were coming down the sides of the walls outside, and there were a bunch of kids on one floor. They were waving at us, so we stopped cleaning the windows and pushed off the walls and swung around. They were taking pictures and putting their hands up on the glass. The kids loved it. Sometimes, though, I accidentally scare people when I drop down to their window because they aren’t expecting it. That happens a lot.

I want to keep doing this and go to college, but I’m not sure for what yet.  I just like making the kids happy.  —Dayne Whitesides

This article appears in the August 2013 issue of Charlotte magazine.
Categories: Buzz > People, Feature, The Buzz