Don't ignore your four-year-old's bedroom any longer—design for kids has come a long way since the baseball- and princess-themed rooms of yesteryear. Children's-room décor today boasts transitional looks (designs that last throughout a child's tween years) that are so hip you just might want to incorporate a little of that aesthetic in the rest of your home. We found four of the most impressive kids' rooms in Charlotte—from a mod nursery to a whimsical playroom -- that are not only inspirational but also have design elements that are easy to replicate (for less!) in your own abode. 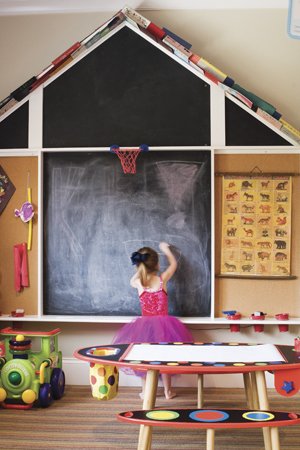 Kate Mattei pays in her playroom that was designed with the help of her designer grandmother Patsy Anderson of Blowing Rock Interiors.

As a graphic designer and co-owner of Brella Baby — which designs everything from birth announcements and custom stationery to cool baby books — Sarah Pay knew she wanted to keep with the modern look she’d established in the rest of her south Charlotte home. The result: a hip, contemporary nursery for her second son, one-year-old Bennett. "Since we’re having children a little later in life, we’ve already developed a very specific set of ideas based on design ideals that we don’t want disrupted once junior comes along," Pay says. But she didn’t empty her wallet designing the room. The Aerial Crib by Lawson-Fenning for Nurseryworks, available at nesting, and the Eames Armshell Rocking Chair from Design Within Reach are the biggest splurges, while the Hovet Mirror and Merete curtains are from IKEA, the hanging lantern is from Target, and the Ultimate Shag Rug by Hellenic is from Rugs USA. And, ever resourceful, Pay bought sheets from Target to create Bennett’s crib bedding, and she made the owl triptych out of insulation foam board and felt. "It’s a cheap and relatively easy project for a nesting mom," says Pay. In the end, the room meshes well with the Pays’ contemporary décor in the rest of the home. "What we say is that becoming a parent changes your life," Pay says, "not what you love. We all want our baby’s room to fit in with the rest of our home."

The Aerial Crib by Lawson-Fenning for Nurseryworks (shown here) is a cool $1,240 at nurseryworks.com. But to keep with a modern look, try IKEA’s Hermelin crib for $129 (which includes the toddler conversion set). The bold cobalt blue acrylic finish and clean lines combine for a contemporary look.

When Joni Shoemake first approached Beth Keim of design firm lucy and company about transitioning her then two-year-old son Jack’s bedroom from a traditional nursery to a clean, modern outdoor/animal theme, Keim was ecstatic. "Lucy and company does so many girls rooms," says Keim, "because, let’s face it, girls are more into decorating their rooms than boys." To start, Keim and Shoemake decided on a color scheme — greens, blues, and browns, which led Keim to pick the bold, graphic rug by Chandra as the starting point for the room’s look. Keim then pulled from the plethora of products and furniture she has in stock in her Dilworth showroom to create the room’s graphic and organic look — the beds, chair, and side tables from Nurseryworks and the dresser from Duc Duc. "If you can’t do it all at once," says Keim, "start with the key pieces — bed, rug, dresser, then paint. With those pieces in place you can add to it — a good lamp, a side chair, window treatments." Simple bed linens and pillows from Linensource and Paper Cloud round out the look.

Interior designer Heather Smith of Circa Interiors and Antiques knew exactly what she wanted when she designed son Whit’s bedroom—a room that would grow with him, not outdate him. So instead of bold, vibrant colors, Smith looked to neutral tones and finishes that were lighthearted yet mature and that both a two-year-old and a twelve-year-old would feel comfortable with. "The colors and fabrics don’t need to be playful," says Smith. "I let the child’s things stand out as decoration and evolve as they do." Smith worked with architect Ruard Veltman of Ruard Veltman Architecture to design Whit’s built-in bed (a trundle is hidden underneath), which took advantage of normally wasted space due to the roof’s eave. To save even more space, instead of doors to the closet space — which would’ve opened up into the room — Smith added draperies. In one closet there’s storage; in the other there’s a cardboard rocket ship from cardboarddesign.com and glow-in-the-dark planets and stars. But the creativity comes in the antique toys that Smith has collected over the years — a circa-1820 Belgian clock tower, an early 1800s French barnyard with two cows and horses, a French pig footstool, and toy trucks from Belgium. "Don’t be afraid to think outside the box," Smith says of incorporating antiques into kids’ room décor. "Plan for longevity."

Smith purchased the alphabet cards (opposite page) by Martha Stewart at a local Michaels. Unfortunately, when we went to find them they weren’t available anymore. So instead we tried Etsy.com — our go-to site for handmade crafts for less. Bibitty’s online shop (search "bibitty") features a full set of twenty-six cards in French or English with a classic or retro design, respectively, on cotton paper, which not only look vintage, but for just $38 won’t break the bank.

Imagine all the things you wanted in a playroom growing up — then create it. That’s what Scott and Ashley Mattei did when they moved into their south Charlotte home in 2007. With now three-and-a-half-year-old Kate and now one-year-old Charlie, the Matteis wanted to design a playroom that was "where our kids and all of their friends would want to hang out," Ashley says. So during the renovation they added a stage, dressing room filled with costumes, lots of books, dolls, hideouts, a water fountain, chalkboard, and more. Ashley called on her designer mom, Patsy Anderson of Blowing Rock Interiors, to help design the space. The starting point: the large bookshelf, which local artist Leslie Bivens created using the hardcovers of books for the shingles and the bindings to cover the outside of each shelf (the Matteis liked the bookshelf so much they copied the look on the chalkboard after nabbing one-off books for 10 cents each at a local library). Then, to add more color, Anderson enlisted Granite Falls-based Artistically Faux to paint the colorful mural on the ceiling and splatter paint the curtains, and she added the vibrant, shaglike beanbags from High Point’s French Heritage, and the striped carpet from Stark Carpet. "We wanted a place to inspire imaginative play and have a sense of humor," says Ashley.

It’s easy enough to replicate the Matteis’ home-inspired bookshelves. Pick up a bookshelf or shelving unit at a local home supply store. Then head to Sleepy Poet Antique Mall or a local library to pick up books to use as your shingles. Add a small piece of plywood at an angle to the top of the bookshelf using a nail gun. Remove the book pages (and set them aside), and affix each hardcover using the nail gun to the plywood. Use the leftover pages to line the walls of the shelves.

Find inspiration for bedding, furniture, décor, and more at these favorite sites devoted to everything kid. For the ultrahip mom and tot: ohdeedoh.com; For great furniture and accessory finds: yokiddo.com; For the eco-friendly family: inhabitots.com; For a European touch: oh-c-chou.blogspot.com; For design inspiration: projectnursery.com; For a retro aesthetic; threepotatofourshop.com.

This article appears in the Home & Garden April 2009 issue of Home + Garden.
Contest of the Month