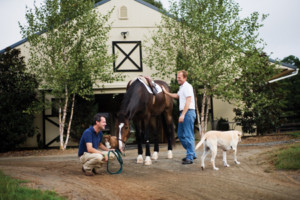 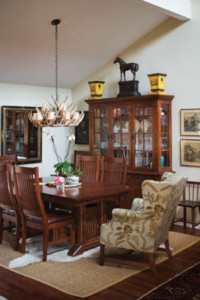 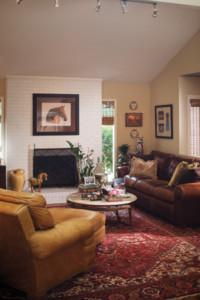 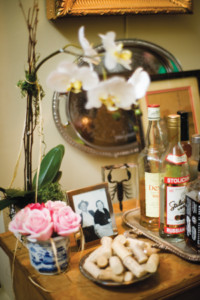 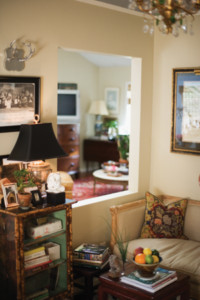 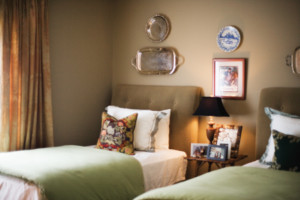 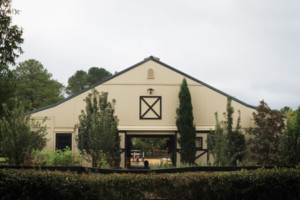 On weekday mornings, while his neighbors are grabbing coffee and dashing out for the morning commute, Rodney Harkey pulls on his boots and walks out his back door, across the stone patio, and into a horse pasture. Although his 1970s tract home in Sardis Oaks looks like others on the street, behind it is a family compound of nearly sixteen acres. Harkey trains horses here — right now he’s working with two from Holland. The horse farm, within city limits, is a secret few know about.

"I remember when this used to be all woods and I would trail ride through here," he recalls. At forty-two he’s slim, tall, and blond — a gentle yet rugged outdoorsman. He grew up on the property before it was annexed into Charlotte; his family lived in one house and his grandparents in another. Today Harkey and his three broth- ers live within a mile of each other and two run Harkey Tile & Stone, the company started by their grandparents. One lives in the home place, a 1950s tile showcase that boasts tile on ceilings and in closets.

Harkey’s grandfather purchased the Sardis Oaks home years ago. He planned to move it to build another road into the farm. That didn’t happen, and Harkey ended up moving here in 2003, leaving behind a career as a horse trainer in Camden, a haven for South Carolina’s old-money equestrians. There he owned the landmark 1902 Firehouse, renovated by designer Billy Silver. It had dozens of skylights, a swimming pool, a solarium, and even a fire pole. But the desire to return to his roots drew Harkey home. Coming back to Charlotte, to a thirty-year-old house with popcorn ceilings and nondescript rooms, was a big adjustment.

Harkey and his partner Ryan Willis, thirty-eight, began working on the house, making cosmetic changes that transformed it into a cozy dwell- ing. Friend Missy Luczak, an interior designer at Meyer Greeson Paullin Benson, was called upon to help with furniture placement and paint colors.

"I’ve known her since I was eighteen," says Harkey. They met as teenagers at a horse show; each was pas- sionate about the sport. Years later they reconnected at the Blowing Rock Charity Horse Show, one of the oldest in the country. Luczak helped with design problems, like the choppy main room’s different ceiling heights. A warm parchment color unified it.

Willis, Realtor and owner of Boxwood Realty, has redone more than a dozen houses in the past ten years; in the late nineties his Myers Park home was featured in House Beautiful. With this project, he kept the fur- niture simple and used an equestrian theme through- out. There are photographs of Harkey’s hunters and jumpers, paintings of favorite horses and horse shows, and small equestrian statues. Comfy leather seating, well-placed lighting, fresh paint, granite kitchen coun- tertops from the family business, and new hardwood floors have updated it without going overboard.

Harkey believes the change from a stylish life in Camden to his family-centered life in Charlotte has been worth it. And he still has his horses.

"I feel lucky that I get to make a living at what I love," he says. By 7 a.m. he’s heading out the back door to feed horses and clean stalls. He’s just a few hundred yards from the morning commuters.

Laurie Prince is a frequent contributor to this magazine. She last wrote about a Charlotte resident’s home in Aiken, South Carolina.

This article appears in the Home & Garden April 2010 issue of Home + Garden.