Mothers, teachers, artists, and nurses by day, give these girls some roller skates, and they will kick your ass. For fun 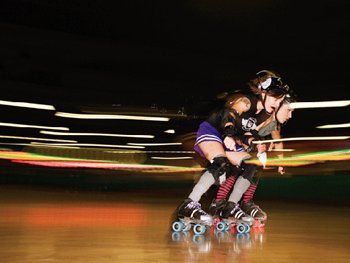 The roller rink is deserted except for one young woman figure skating on the long expanse of shined hardwood. Modern R&B oozes from the ceiling. The lone skater pirouettes on wheels, stretching one leg straight into the air, her skates standing over her head. She is long legged, lean, and graceful, pleasing to watch as she takes her body to places most people cannot.

Along the side of the floor, another type of athlete begins to appear: the roller girls. They are deliberate and grim as they stretch, tie laces, put on helmets and knee and elbow pads. One by one they take the floor and slowly begin to circle the track.

The R&B stops. The figure skater goes home. The roller girls speed up, loosen up, begin to talk, and even laugh a little. Soon there are about fifteen young women in helmets and pads rolling through the big silence of the room. There are also three men with the group, referees in training. After skating for several minutes, they circle up and stretch. Skating drills begin. Eventually a scrimmage develops.

The Charlotte Roller Girls are getting ready for their first official, nonexhibition bout against Columbia on January 27 at Cricket Arena. The local team was started in late 2006. In the past year, they have practiced and worked to learn the game. They have played three practice bouts and a tournament. Out of the three, they have one win, against the same Columbia team that is coming to town in January. Even when losing, they have learned from the more experienced teams and players in the league, the Women's Flat Track Derby Association.

The words "roller derby" conjure up memories for many people, like me, who used to watch the game on television in the 1960s. It came on late in the evening, somewhere in a block of thirty-minute programs that also included Bill Hefner's Country Music Show and Gordon Sole's Championship Wrestling from Florida. The bouts were televised in a syndicated format, so there was no telling when they'd been played. There was no introductory music, just the sounds of the wheels on the rink and the announcers speaking. Those teams were professional and coed. The matches were split into four quarters, with the women skating and battling through two, and the men taking the other two. Elbows in the mouth, drop kicks to the head, bodies flying over rails, teeth shattering, bone-breaking collisions were regular and expected parts of the game, which was played on an inclined track. The matches were held and recorded in big blue-collar cities, then broadcast through syndication to the rest of the country.

For those in the South who still regarded the North as a haven of thuggery, crudeness, and coarse behavior, this was confirmation. Even in slightly blurry black-and-white, the hits could be felt through the screen. To me, it was amazing to see women behave in such a violent manner; to give and take hits that looked as hard as many I was experiencing playing high school football. Regardless of prejudice or regionalism, a simple truth was that roller derby, at least to me, was scary: roughneck city guys and girls who reveled in cruelty and violence on wheels.

Despite this, roller derby had a phony, fixed edge to it, much like professional wrestling. There were theatrical feuds and gesturing, but there was always an inescapable feeling that the roller derby players didn't really know who was going to win, which made for thrilling drama in watching the jammers negotiate the track and the pack at high speed. Among those players in the old days, literally towering above men and women in skill and stature, was Joanie Weston of the Oakland Bay Area Bombers. A gifted athlete, she is probably the one player that people remember:

"She is not only the best skater, but she clearly looks the part as well. With her bleach-blonde pigtails flowing out from beneath her shiny black pivot helmet, Joanie appears like a brave Viking queen in full battle regalia." —Frank Deford So in some ways, then, it's no surprise the game, now amateur and cleaned up to emphasize competition over savagery, is an all-women sport. The banked track has been replaced by a flat track. Bouts use anywhere from three to seven referees. Clean, body-to-body hits are allowed, but the old-style elbows, drop kicks, and other types of assault-like behavior are prohibited. In the old game, referees seemed to be just another prop, a pretense toward civility and order. Today's game emphasizes safety; the referee's role has been expanded and strengthened.

Even with the rules cleaned up, the game is still tough and painful. Anyone who has ever skated knows the amount of effort it takes just to make it around the track. Imagine doing it in a competitive situation against experienced players who are determined to knock you down. Then imagine doing it after working a full-time job and, for many, raising children.

"When I'm out there, I can be somebody else," says Lucy Kwipment, who teaches preschool and runs a grocery/deli during the day. "I'm my own superhero, and a superhero to my kids. I like that feeling. And, yeah, nobody out there," she says, nodding toward the roller rink, "calls me Mama."

Her real name isn't Lucy Kwipment (it's Cress Barnes). That's her roller derby name, and all of the roller girls take on such names after they and the team know that they're going to last. PollyAnnarchy, Brick House, Ducky Long Stockings, Hellin Felon, Maddie Bash'er, Kitty Wails. Roseanna Roseannadamage likes the exercise and the chance to meet and mingle with other nonconformists. She's a thirty-something bartender and artist. Her husband is a working musician who takes care of the house and children during the day while she works. Her time with the sport goes back a little further than most of the other players. She started playing in Wilmington, for the old Wilmington Killers. When she moved to Charlotte, she gravitated toward the local team. Somewhere in the mix she had time to birth a child; but she got back to the game as soon as she could. "I like strong women, women who stand up for themselves and make their own destiny. That's what I like about the women I meet out here." She says the violence in the game is not a problem. "It's not personal. I guess some of the women take it that way. People get mad and say and do stuff, but for me, it's all over when the bout is over, and when we leave the track, I'll shake everybody's hand." Nice as Ice designs corporate training and development programs for a living. "The exercise is great, but mostly I like getting to do wild stuff out here that I can't do ordinarily: dressing in wild clothes, fish-net stockings, strange makeup." She also performs in the wind section of the Lake Norman Orchestra. And she drives eighty miles roundtrip to make practices.

Sonic Death Rabbit uses the same name in her techno-rant-punk-rock act. As a musician/writer of clever, satirical lyrics, she performs in a bunny suit. On the rink tonight she's dressed in black clothing and padding, but pink bunny ears stick out from her helmet. They flutter in the air as the drills pick up speed and intensity.

Watching the women work at their sport, it's soon clear that these are all highly motivated people, who work, raise families, handle intense responsibilities, then have the guts and the strength to go where necessary to get outside of that. EmmyLou Harass is one of the original roller girls. She started playing more than a year ago, and she chose the name to pacify her mother, who would not have been pleased with anything vulgar. Her mom, dad, and assorted relatives have been at all the matches, so she has to check her attitude and her mouth. "I was always a tomboy, a daddy's girl. I played basketball, but I was kind of rough, and that got in the way. On the track, I get to be a badass. I like that, being sexy, girly, but a badass, too."

(Yes, indeed. This writer must note that the roller girls do bring a significant degree of pulchritude, as well as athleticism, to the floor.)

Ducky Long Stockings, blonde, tall, rangy limbed, and looking a lot like Joanie Weston, is nursing a broken finger from the recent Athens matchup. She looks forward to getting back to the game. "It's fun, and it lets me escape from the humdrum and ordinary. I become another person when I'm out there. I get to vent my aggression in a way that's not allowed in public." She looks at me like she wonders how loud a thump I would make on the floor. "I have aggression that builds up, and this is a good release for it. When I leave here, I feel pretty relaxed." Just off a tough bout with a more seasoned and experienced Athens, Georgia team, the Charlotte women are dealing with lots of bruises, sore muscles, and a few broken fingers. Still, no knocked-out teeth, concussions, or broken backs, and the Athens team threw a party for them, as is customary, after the bout. The Athens women complimented the team for hustle, clean play, and guts. These words meant a great deal to the team.

Practice ends. They put away their gear and head back to their cars. Rain is falling, a rare occurrence these days. The attitude and mood among the Charlotte Roller Girls is energetic and positive. Exercise endorphins have them laughing and talking, red cheeked and sweaty. They love the sport, and it shows. They have given themselves permission to lay down all of the outdated stereotypes of femininity that still plague women, and to be warriors, survivors.

While we are a society that desperately seeks heroes, these women have found heroes in themselves. Win or lose, big crowds or not, these are people who are not satisfied to watch life pass by on a television or computer screen. They buy their own equipment, and sacrifice what they have to in time and money. What they might do with the rest of their lives is irrelevant on the track. This is sport for sport's sake. Nobody's getting paid except in fun and experience.

Rules of the Game

Catch Them in Action

The Charlotte Roller Girls play in the Women's Flat Track Derby Association. The WFTDA encompasses the entire United States with teams in most major cities. Teams in the league that Charlotte will compete with are based in Raleigh, Columbia, and Greenville, South Carolina; Asheville, Athens, and Atlanta, Georgia; and Roanoke, Virginia. As the Charlotte team matures and grows, it will expand its list of opponents to teams farther away.

The team's next bout is January 27 at Cricket Arena at 6 p.m. Tickets are $10 and can be purchased at the Common Market in Plaza Midwood, the Ovens Auditorium box office, and Ticketmaster.com.

This article appears in the January 2008 issue of Charlotte magazine.
Categories: Feature, The Buzz