Leslie Hooton often jokes that some people have a stroke of luck. “I had one at birth,” the 61-year-old Alabama native says with a laugh. 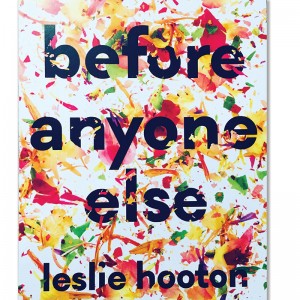 Hooton came up with the title of her book after a 17-year-old neighbor called her BAE, which stands for Before Anyone Else.

She’s not kidding. Her disability was a mystery to her until age 50, when her doctor diagnosed it as complications from perinatal stroke, the term for a stroke that attacks children within the first seven days after birth. It left her right side atrophied; she has very little feeling in her arm and leg. She can walk but doesn’t have the strength to keep a flip-flop on her foot or ride a bike. “I didn’t want to be ‘poor little Leslie,’” she says in a thick Southern drawl. “I wanted people to talk about what I could do, not what I couldn’t do. If there is a heaven, I’ll wear Jack Rogers flip-flops and ride a pink bike with a bell to announce I made it into heaven.”

When she turned 50, Hooton’s left hand and arm began to weaken from overuse of its muscles and nerves, and after a couple of surgeries, she could no longer wash her hair or type. So the author of the recently published Before Anyone Else had to dictate her books. “My ‘dragon,’ which is my dictation device, had to learn to understand my Southern English,” she says.

Hooton’s frothy beach read grew out of a dark time in her life five years ago. She spent mornings with her mother in a dementia center and afternoons at her divorce attorney’s office as she dissolved her 25-year marriage. “Everything about this book is happy,” she says. “I needed happy at that point in my life.”

The fourth-generation attorney met her husband in law school and followed him to Charlotte. But when she struggled to find a job and have children, she says, they had little to talk about. “I always assumed I would be a career woman, but I knew having children would be dicey,” she says. “I was left with the question: What now? What do women in their thirties talk about? Babies and careers. I had neither.”

So she turned to writing, something that had helped her survive her teenage years, when she endured more than 24 surgeries as doctors tried to improve function on the right side of her body. She wrote her first book at 16, but Before Anyone Else is the first she’s published.

“Writing quenched my loneliness,” she says. “My characters kept me company.”

Hooton came up with the premise for Before Anyone Else after she’d spent countless nights eating out and being over-served in restaurants during her divorce. “I didn’t even know if restaurant designing was a job,” she says. “I had to do a lot of research, but I discovered that it was and that there were no novels written on the topic. This was my chance.”

The title came to her after a 17-year-old Myers Park neighbor called her BAE. “I had to Google it and found out it meant, ‘Before Anyone Else,’” she says. “My heart stopped. I knew I had the title for my book.”

Before Anyone Else is the story of 30-year-old Bailey Anne Edgeworth (BAE), who transforms restaurants—and her own life along the way. “It’s just a fun read about friends and food and family and a little romance,” Hooton says. “I went with a small press, and I had an uber-agent in New York. She just didn’t know what to do with me. I told her I didn’t want to win a Pulitzer, I wanted to be a Target pick. That’s my ambition—to be picked by the Target people.”

Hooton is already at work on another book about friendship, funeral casseroles, and lucky dust, and says writing it has gotten her through COVID-19. “I write to take myself to places I can’t go and to meet people I wouldn’t necessarily meet,” she says. “Reading and writing has saved my life, and if I can make someone else feel not so alone in the world, that’s the Pulitzer Prize to me.”

This article appears in the August 2020 issue of Charlotte magazine.
Categories: The Buzz