How Can We Keep Housing Affordable?

As teachers, cooks, cashiers, and bus drivers are being priced out of Charlotte, one question looms: How does a growing, thriving city in modern America keep housing affordable for its working-class citizens?

ONE RECENT SUNDAY AFTERNOON, Jacqueline Ingram and her two daughters explore an empty four-bedroom house for sale on a Brianna Way cul-de-sac in southwest Charlotte, filling it with their dreams along the way.

“This one is mine,” 12-year-old Nya says of an upstairs bedroom with a view of the Clanton Park neighborhood. “I could put my chest over there, and my table there.” As five-year-old Rejonee sprawls out on the carpet in the room across the hall, Ingram says this house is one of the nicest she’s seen.

“It’s move-in ready,” Ingram says. “This would be so beautiful for us.”

The 40-year-old mother of three has worked a series of minimum-wage, full-time jobs since age 15. She’s rented numerous dwellings, ranging from her mother’s mobile home to apartments to her current three-bedroom house in north Charlotte. Ingram manages to swing the $600 rent by working the first shift, tagging merchandise, at the Ross Dress For Less distribution center in Rock Hill, South Carolina. She earns $9.29 an hour.

A bitter, drawn-out divorce that began in 2003 and the ongoing custody battle threatened to drain Ingram’s ability to consider a happier future for her family. But when she saw the name Faith Triggs on a business card at her insurance agent’s office, Ingram took it as a sign to move forward. She’d have to make a big leap of faith, she told herself, to shift from renting to owning her first home.

“I had started to look into how I could make it work, trying to get my credit together and learn about financing, and it seemed a little scary,” Ingram says. “But something told me to call her, because I wanted to be able to leave my kids something of value, something they can pass on, too.”

That phone call launched what, so far, has been a yearlong relationship between real estate broker Triggs and Ingram, as they search for a house within her $108,000 Federal Housing Administration (FHA) loan budget. Although she specializes in more expensive housing, Triggs feels a responsibility to support people like Ingram. She’s a member of the National Association of Real Estate Brokers, and Triggs takes the group’s mandate of expanding African-American homeownership to heart. Triggs says she sees scores of Charlotte-area families like Ingram’s who should have more to show for their efforts.

“Unless the community comes together to help families like hers, she’s not going to be able to stay in this city,” Triggs says. “That’s a tragedy, because as a hard-working, tax-paying woman with a beautiful family and a strong work ethic, she has every right to live where she chooses and where she can achieve her goals, just as much as people in Ballantyne and Piper Glen and Huntersville.”

Ingram’s story typifies one of the major enigmas of Charlotte’s urban transformation—the scarcity of affordable housing for the people whose labor greatly fuels the city’s expansion. The gleaming skyscrapers, condos, and hip restaurants need a steady stream of people to build and staff them. Yet those potential employees can’t even dream about living anywhere near these beacons of urban development.

City planners estimate Charlotte needs more than 34,000 additional affordable housing units to meet the current demand for people who, like Ingram, earn 60 percent or less of the area median income (AMI), which is about $54,000. The average rent for a two-bedroom apartment in Charlotte is $1,468 per month—a figure that’s generally far out of reach for people in the workforce sector that includes cashiers, bus drivers, nurses aides, and secretaries.

Triggs says that the kind of house and neighborhood Ingram longs to settle in costs at least twice what she can pay.

The city has been obsessed with the issue of social mobility since a 2014 Harvard/Cal-Berkeley study ranked it last among major American cities in that category. Charlotteans born into poverty can rarely expect to improve their economic prospects through quality education, better employment, or access to safe, stable housing. Everyone from politicians to police to protestors points toward this lack of hope as the major underlying cause of the unrest that followed the police shooting of Keith Scott last September.

Several prescriptions for solving these problems are crystallized in the Charlotte Mecklenburg Opportunity Task Force report, released this past March. Affordable housing is a key piece of the report, but it’s also one of the most complicated, landing at the intersections of politics and business and development and humanity. Someone at some point must make a sacrifice, and throughout the city’s history, that burden has fallen more on the people who need affordable homes than those who build and sell them. 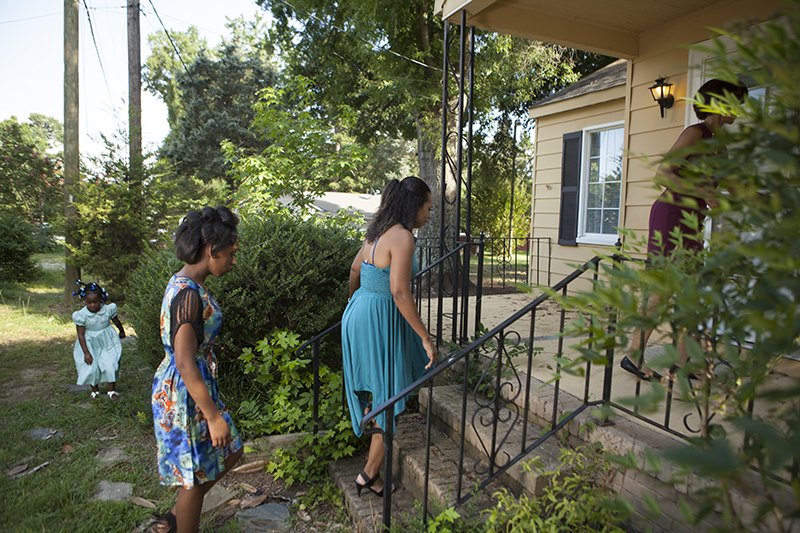 “I wanted to be able to leave my kids something of value,” Ingram says of the reason she wants to own a home.

“Charlotte is a big town that wants to be a big city, but some of the pro-business groups that are fueling the growth didn’t necessarily consider things like efficient public transportation and affordable housing when they designed that growth,” says LaWana Mayfield, the chairperson of the City Council’s Housing and Neighborhood Development committee. “It’s like they’re saying, ‘It’s OK for you to work for me, as long as you don’t live near me.’ We have to change that view if we’re really going to grow this city in the right way.”

According to the Opportunity Task Force report, many of the families who need affordable housing in Charlotte have to settle for less-than-safe neighborhoods with few or no quality education options. They must move frequently when money is scarce, which further disrupts education for children. Many families resort to lodging in weekly motels, which takes up the majority of their income, or share dwellings with family or friends. The report also notes the increase in homeless families seeking shelter at Charlotte’s Salvation Army’s Center for Hope.

The city has made several attempts to address the problem in recent years, with scattered success.

For example, in 2015, voters approved a $15 million affordable housing trust fund to support the construction of new multi-family housing developments and the renovation of old ones. The fund would also help seniors buy or rent housing, and provide support for disabled people and the homeless. The money was also designated to buy land that would be used to develop mixed-income housing projects.

Also, the $20 million A Way Home Endowment, created in 2016 through a partnership among the city, local philanthropists, and Mecklenburg County, provides rental subsidies and support services. The fund also prioritizes the creation of affordable housing in so-called “high-opportunity” areas, where there are more available jobs and options for quality education.

The City of Charlotte has committed $10 million toward the endowment, and Foundation For The Carolinas is raising $10 million from the private sector, with nearly $7.5 million already committed.

Rental and home ownership funding support are important tools for addressing the affordable housing crisis. But the core of the issue is supply and demand. Available land in Charlotte gets snapped up quickly, and prices for lots tend to go to the highest bidder. Most developers want to recoup their investment by building market-rate properties versus affordable housing. And they can’t be forced to include affordable housing in their projects because North Carolina doesn’t permit mandatory inclusionary zoning laws that would require a certain percentage of units to be set aside for low- and medium-wage workers.

JUST NORTH of the Brookshire Freeway, between I-77 and Statesville Avenue, there’s a neighborhood filled with shining new apartments, townhomes, and houses. On first look, you might think it’s a model home community. The wood, stucco, and brick dwellings sit against a backdrop of manicured lawns and public art installations. There’s plenty of green space for walking dogs or taking an evening run. Kids of all races romp at a playground, and from quite a few vantage points, you can catch a sweeping view of uptown’s skyline.

It’s a mixed-income housing development named Brightwalk, developed by the Charlotte Mecklenburg Housing Partnership. What was once a development of 576 units of barracks-style, low-income housing on 60 acres of land now contains a mix of affordable rentals for seniors and families, along with market-rate town houses and single-family homes. Rents can range from about $300 for low-income seniors to $875 for a three-bedroom apartment. Market-rate homes range from the upper-$200,000s to the mid-$400,000s.

“(Brightwalk) really proves that you can build affordable first and it does not affect the market at all for the single family homes,” says Julie Porter, the partnership’s president.

Still, there’s doubt. In Charlotte and across the country, successful affordable and mixed-income housing projects are eyed with suspicion or rejected outright. In many neighborhoods, “affordable housing” means poor people and lowered property values.

“If you say, ‘We’re building high-quality, attractive homes for your mother’s caretaker, your child’s teacher’s aide, or the teller at your bank,’ it can sometimes help,” Porter says. “But people often do a very quick translation in their minds from workforce housing to affordable housing. It is incredibly difficult to change hearts and minds in some of those areas.”

That may be the ultimate solution to the affordable housing crisis: Getting communities to understand the value of it. While the Opportunity Task Force generated energy and hope, groups across the city agree it’s time to move beyond studies and committees and town hall forums.

“We as citizens of Charlotte need to come together to come up with ideas,” says Mary Kelly, a retired telecommunications executive and a member of Myers Park United Methodist Church. Mary and her husband, Peter, a retired IT executive, are part of growing movement within Charlotte’s faith community to create more housing options for low- and moderate-income people.

The Kellys were in Baton Rouge, Louisiana, last September on a volunteer mission with their church, helping muck out the houses of flood victims, when they heard about the protests back home in Charlotte. Myers Park United Methodist formed a social justice committee last November, and of the range of issues to be addressed, the Kellys decided they would work on affordable housing.

“We are in discussions as a church to talk about: How do we look at the land and the buildings that we own to determine if they can be repurposed for affordable housing?” Peter Kelly says. “How do you decide what the best use is? Is it selling the land and taking the profits, or trying to get churches to understand investing it in affordable housing could actually be a part of the mission of the church?”

Myers Park Methodist hopes to follow the lead of St. Paul Baptist Church, which spent the past eight years acquiring land and seeking private funding to build affordable housing. In August 2016, construction crews broke ground on a 112-unit affordable senior and multifamily housing community on Allen Street in the Belmont neighborhood that surrounds the church.

“Morally, it’s just the right thing to do to make sure that communities reflect all of their members,” she says. “Because that diversity, the mosaic of any neighborhood, adds to the character and the heart of community.”

Triggs ends her tour of the Clanton Park house by reminding Ingram of some things to consider before they put in a bid. “I think you just want to look at whether you have enough storage, the layout of the backyard, whether you would want to put up a fence,” she advises.

Ingram ultimately decides not to put in a bid. But just before they leave, five-year-old Rejonee offers the last word on the property. “It’s pretty!” she chirps, leading her mother and sister out of the front door and on to the next potential home.

This article appears in the September 2017 issue of Charlotte magazine.
Categories: In Print, The Buzz
Contest of the Month