BAGELS ARE DENSE, doughy rings of heaven, and conventional wisdom says the best ones are made in New York. Until about 10 years ago, a bread-based breakfast in Southern cities like Charlotte usually started with a biscuit. Good bagels—like, really good New York-style bagels—weren’t part of our morning ritual. But Ronnie Rippner changed all of that when he opened Poppy’s Bagels & More in Cotswold in 2010.

If you visit either of Poppy’s two locations (the second one opened on South Boulevard in December), you’ve probably seen Rippner behind the register, chatting with customers, restocking bins with fresh bagels, and taking dozens of orders for breakfast sandwiches, all before 10 a.m. My two children have grown up on his bagels, and it’s become part of our weekend routine to swing by and stock up on our weekly dozen. The line can be long, but Rippner and his crew keep things moving. My kids never have to wait long for their blueberry bagels, and the staff isn’t bothered if they’re noisy or leave a trail of crumbs and cream cheese fingerprints at the table. This is what Rippner lives for.

“I really enjoy seeing the customers who come back, seeing their families grow,” he says. It’s a trait he’s come by naturally. His late mother, Georgeana, was a fixture at Poppy’s during its first five years in business. Regulars loved to chat with her when she was behind the counter, and if she met someone new, she always asked where he or she was from. “She was Hungarian by birth, and she could be a little off-color sometimes, but people always liked to laugh with her,” Rippner says. “She was the face, while I was working in the back. But who would you trust more than your mom out front watching the register?” 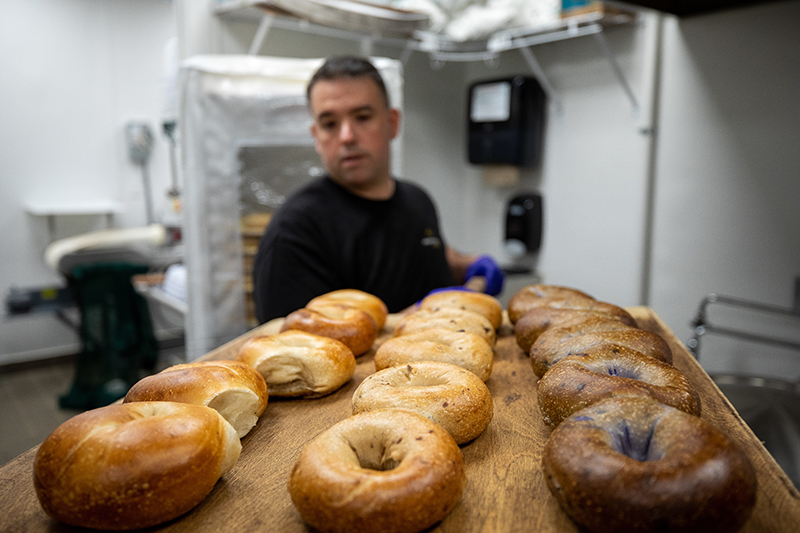 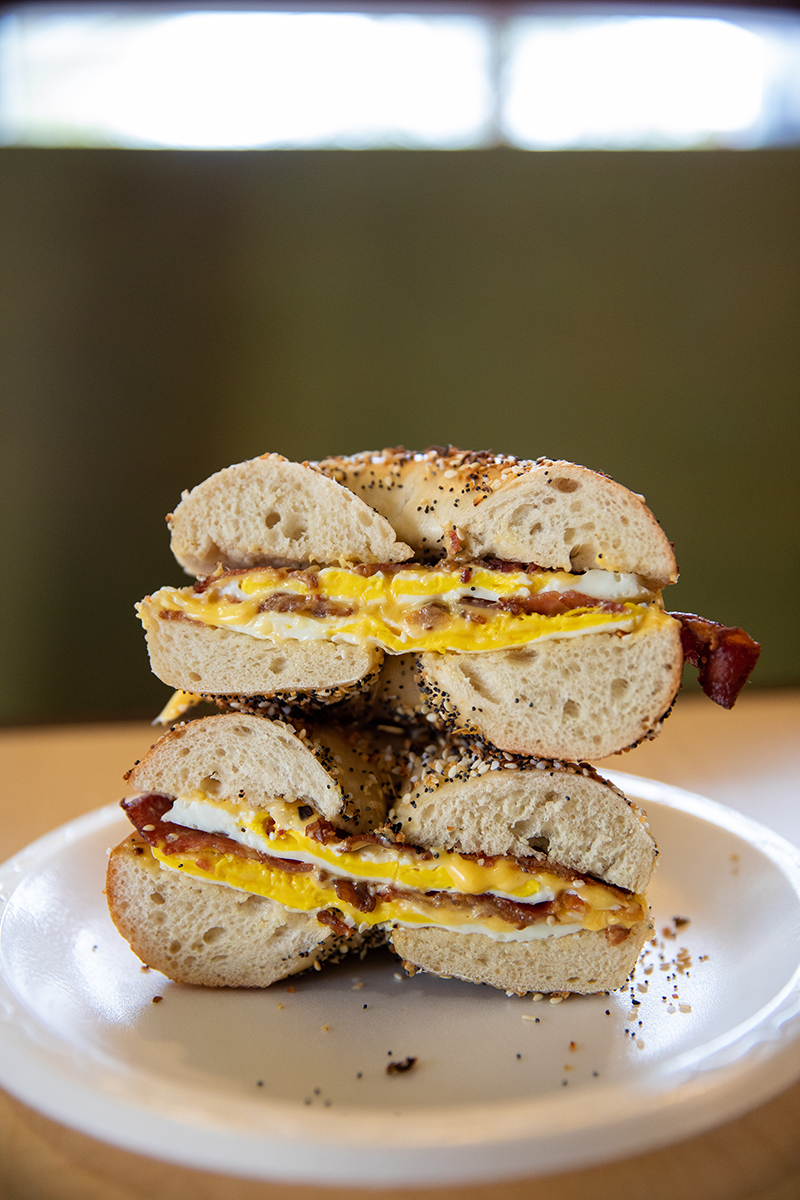 Poppy’s New York-style bagels are a local favorite. (Above) Bacon, egg, and cheese on an everything bagel.

Georgeana died in 2016, but Poppy’s remains in the family. Rippner’s father, Leslie, inspired the name of the shop, where he still helps out from time to time. “Poppy” was the nickname Rippner’s two children—now ages 16 and 12—gave to their grandfather when they were little. And though he says there’s no pressure on his son or daughter to learn the bagel trade, “There’s a business open to them if they want to be involved down the road.”

Bagel Ace wasn’t Rippner’s original career aspiration. The Long Island native worked in the city as an art dealer for nearly 20 years, and later transitioned to banking, where he found success as a mortgage lender. But like many New Yorkers, he was drawn to the lower cost of living in the South, and since Charlotte was a banking city, it seemed like a good fit. He secured a job with GMAC (now Ally Financial) until the financial crisis caused his division to shut down.

He knew Charlotte was a city of transplants, and often heard newcomers say the area was missing a good bagel shop. So he went back up north to learn how to make a bagel the New York way, absorbing tips from a number of bakers. His favorite shop, he says, was Tal Bagels on 86th Street, which he used as inspiration for his own shop.

As Rippner gives me the tour of his new location in South End, I ask him why he thinks bagels are so universally loved. “It’s comfort food,” he says. “Who doesn’t love a good piece of bread? Kids nosh on them, adults love the crisp, crunchy crust … They’re filling, and they’re simple.”

They’re also versatile. Toast them, spread them with butter or jam, dress them up with lox and cream cheese, or have them plain. Eat them one-handed at your desk, or savor them with a mug of coffee and the Sunday paper. Layer them with turkey or chicken salad and pack them in a lunch box. Bring them to a PTA meeting, a staff lunch, or a family holiday. Good bagels will always find a fan base.

“You have to learn the process,” Rippner explains as I follow him into the kitchen. “Bagels need to be boiled in a kettle first to get the sheen and the crust.” I ask him if it’s true that New York City water is the magic ingredient in an authentic bagel. Rippner shakes his head. “Any city water will do—just don’t use well water.”

It starts with an industrial-sized mixer that holds 100 pounds of flour. A baker removes the dough from the mixer and puts it on a table where he slices it into strips. Then, he places them into the bagel divider which forces the dough out. The pieces then go into the “former,” which rolls and makes the bagels. The bagels sit on a rack to rise before they go in the refrigerator for 24 hours to cool. Next, they take a quick bath in a kettle of boiling water before heading to the 515-degree oven for about 15 minutes. Inside the oven, the bagels bake on burlap boards to allow the tops to get a good crust. When the baker flips the board, the bagels finish baking right on the stones. Rippner says he’s gotten some criticism for the $1.39 price tag for a bagel, but once you see how labor-intensive his method of bagel making is, it seems like a bargain.

When Rippner opened his Cotswold store, rising before 4 a.m. was part of the job. These days, he tells me, the first baker usually comes in at 11 or 12 the night before to start the first batch of bagels, which are now sold in 18 Harris Teeter stores in the area. This amounts to roughly 1,600 bagels every day, which are sorted for each store, then collected by three drivers, who start stocking grocery shelves at 4:30 a.m. Back at Poppy’s, the baking continues until they have everything ready by the time they open at 6 a.m.

On the off chance you’ve come to Poppy’s for something other than bagels, you can also order omelets, paninis, soups, and sandwiches. Eggs are always made to order, and Rippner swears they make the best chicken salad in the city. Or pick something from the dessert case: oversized muffins, scones, black and white cookies, or coffee cake with crumb topping that’s an inch thick.

But it’s the bagels that keep his customers coming back. The bacon, egg, and cheese on an everything bagel is their best-selling breakfast sandwich, and the plain bagel remains the most popular flavor. As for Rippner, his standard order is a toasted sesame bagel with a little butter and ham, egg, and Swiss. For me, it’s a toasted asiago bagel with lox and cream cheese. And my kids never deviate from their blueberry bagels.

Rippner knows this, of course, so he loads up a bag with our weekly dozen before I head out. He also throws in some blueberry-flavored cream cheese that he says the kids will love, because he’s good like that.

When I get home, I see he’s put four cinnamon raisin bagels in the bag for my husband, too. Maybe 16 bagels will get us through the weekend. 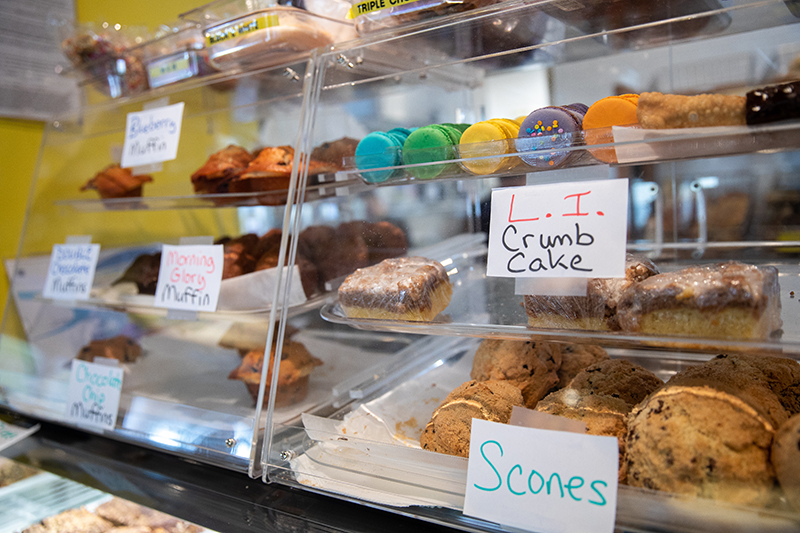 This article appears in the May 2019 issue of Charlotte magazine.
Categories: Food + Drink, In Print