Inside a Cornelius Lake House Built with Forever in Mind

MOVE or remodel? That question nagged at a Lake Norman couple. They loved their multi-story lake house in Cornelius and the neighborhood they had called home for years. But they also needed a space that would work for them as they grew old together—a forever home, the wife tells me.

So the couple, who requested we not use their names, called on architect Harry Schrader of Schrader Design to create a more functional, single-story home on the same plot of land their current house occupied. The house Schrader proposed was tight for the lot but fit all their needs.

They were almost ready to demolish their existing home and move forward with Schrader’s plan when the homeowners received a call from their next-door neighbors. They were moving to Florida, and their house was going on the market. “So we said, ‘Well, this just might work out,’” the wife says. 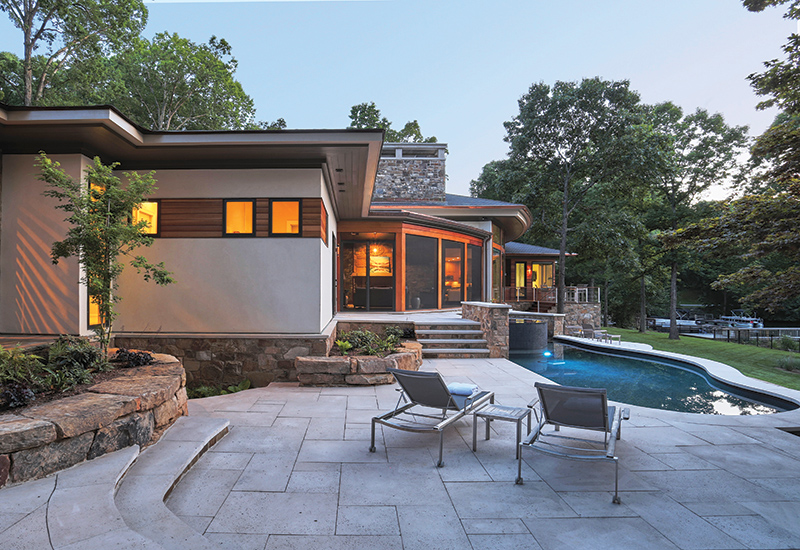 General contracting firm Andrew Roby built a pool and hot tub where the homeowners can enjoy their waterfront view.

The couple purchased the adjacent house and Schrader began working on a new plan, one in which they could spread out. “Now the dog has a huge yard for running,” the wife says, smiling.

There’s more to love than the spacious lawn facing the lake for Tess, their golden retriever, and the homeowners. The revised blueprint—built by Rob Dabrowiak and his team from Andrew Roby, a general contracting firm—also expanded the footprint of the house, adding wide-open living areas and more space for the dog to gallop around. 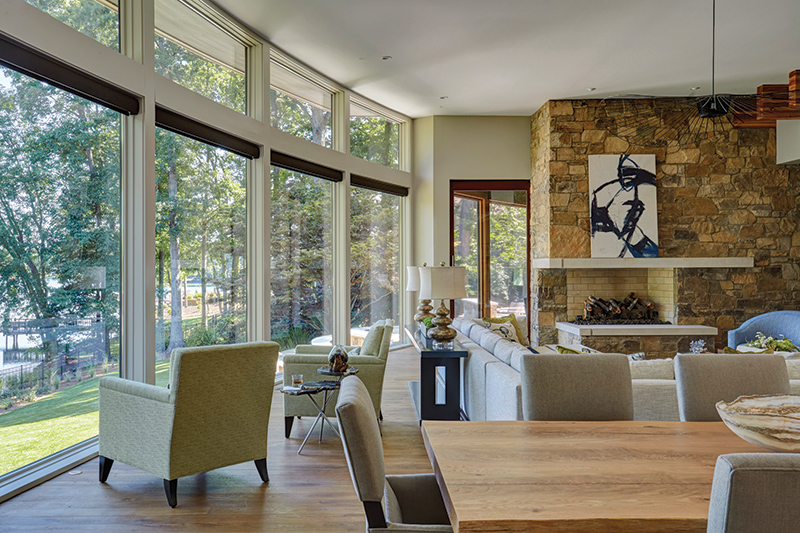 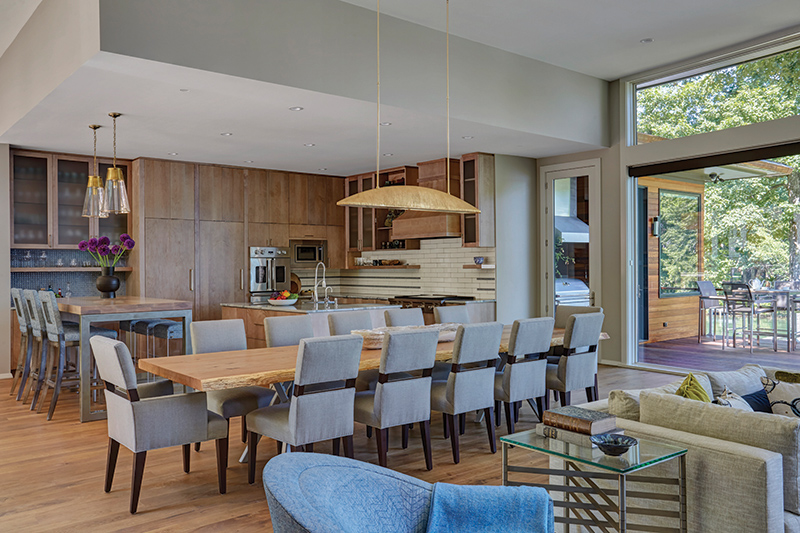 Two years passed from early remodeling conversations with Schrader to their move into the finished home in October 2017. From the outside, the home evokes Frank Lloyd Wright’s Fallingwater, with a double-wide stone chimney and, in place of Wright’s waterfall, views of the still lake.

“When we transitioned to two lots, everything changed,” Schrader says. “It was really a great opportunity for us to push new boundaries of design … I feel like it reinterprets what a ranch house can look like.”

Ten-foot-tall windows wrap around the home and fill it with sunlight, especially in the main living area—an open floor plan that incorporates the kitchen, dining, and living rooms. “The natural light is everything in that house,” says Starr Miller, an interior designer who has worked with the homeowners on numerous remodels. “You need fabrics that can stand up against the sun.”

Throughout the living areas, Miller used indoor/outdoor fabrics that won’t fade with extended sun exposure or absorb dirt from an active dog. Miller also chose materials that suited the homeowners’ love of the outdoors and the wife’s obsession with the color blue. “If I put four colors in front of her, she will choose blue every time,” Miller says.

Soft aqua blues and greens flow throughout the home and serve as an extension of the lake. In the kitchen, the Macaubas quartzite countertops are a muted seafoam green with natural marbling that resembles the lake’s ripples. The natural wood cabinets conceal a secret add-on to the kitchen—a butler’s pantry, complete with baby blue cabinets, a dishwasher, baking tools, refrigerator, and a nook to store Tess’ dog bowls.

The wife likes to cook, and she especially loves
filling the 12-seat White Oak dining room table with family. During the building process, three trees had to be chopped down, but instead of tossing the remains, the team reincorporated the tree into a wood slab table. “That’s one of the reasons we really want to live in this neighborhood … because of these big old trees,” she says. 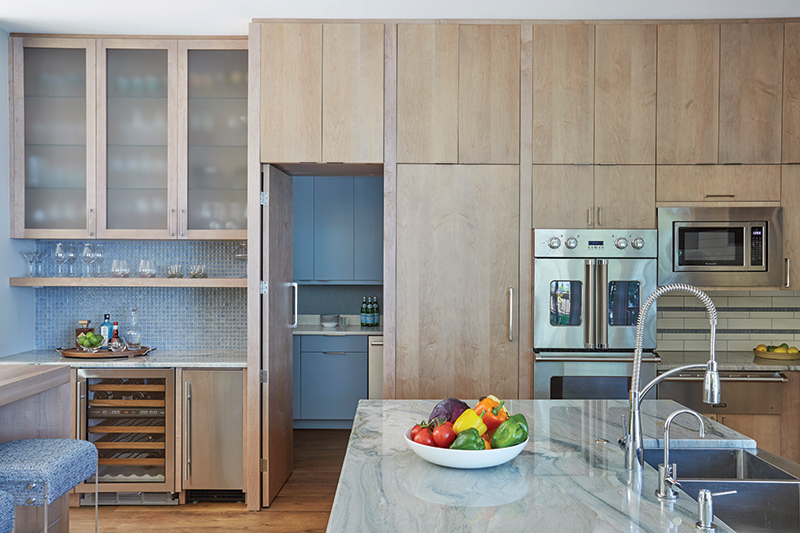 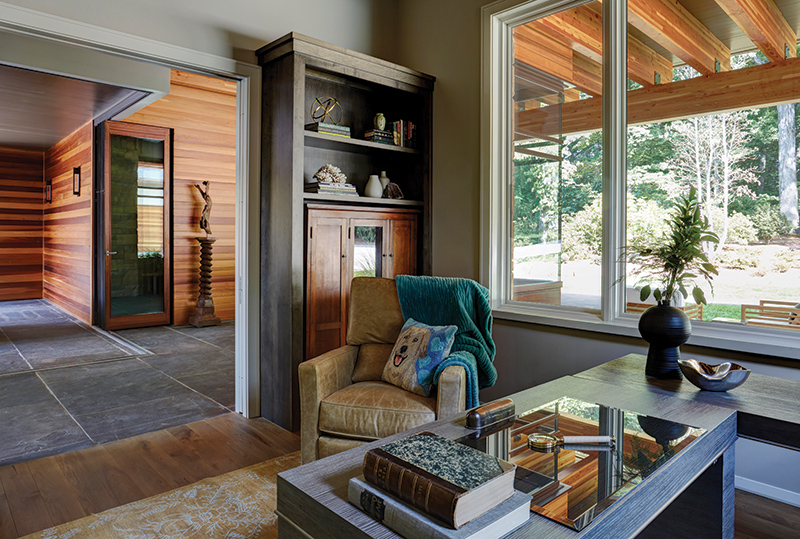 Hidden behind a cabinet door in the kitchen is a separate butler’s pantry with a dishwasher, dog bowls, a refrigerator, and more.

Creating a table from a tree—particularly one living along the damp shore of a lake—was a lengthy process. Just to dry the trees (moist from decades by the water) took 18 months.

But the finished product is striking: The tree’s lifelines trace the path from each head of the table, and imperfect edges on the sides remind diners of the slab’s natural beginnings. The table complements other wood accents in the home, from the ceiling beams to the countertop in the powder room. “(The team) just listened to us, knowing that we like the outdoors and that we wanted to bring the outdoors in,” she adds. “So they did exactly that.”

In a bonus room that serves as a cabana-type space next to the pool and hot tub, Miller designed a high-top table made of leftover wood from the same trees. It sits below a colorful light fixture built out of glass insulators that the husband collected when he was a child.

The homeowners’ new space wasn’t meant to be just a practical place to grow old. The house was built with relaxation and fun in mind—“resort-style,” as Schrader puts it. It’s a home for lounging by the pool and enjoying the lake view, for the wife to gaze out the window of her craft room as she paints the scenery, for the couple’s family to spread out in the three guest bedrooms and the screened-in porch.

The homeowners can slide the porch walls open and transform the space into an extension of the living room, with a two-sided fireplace as a statement in the center and a cool breeze whistling through the screens. “The line between the inside and outside is blurred,” Schrader says. Outside, the sun reflects off boats’ wakes and speckles the room with light. 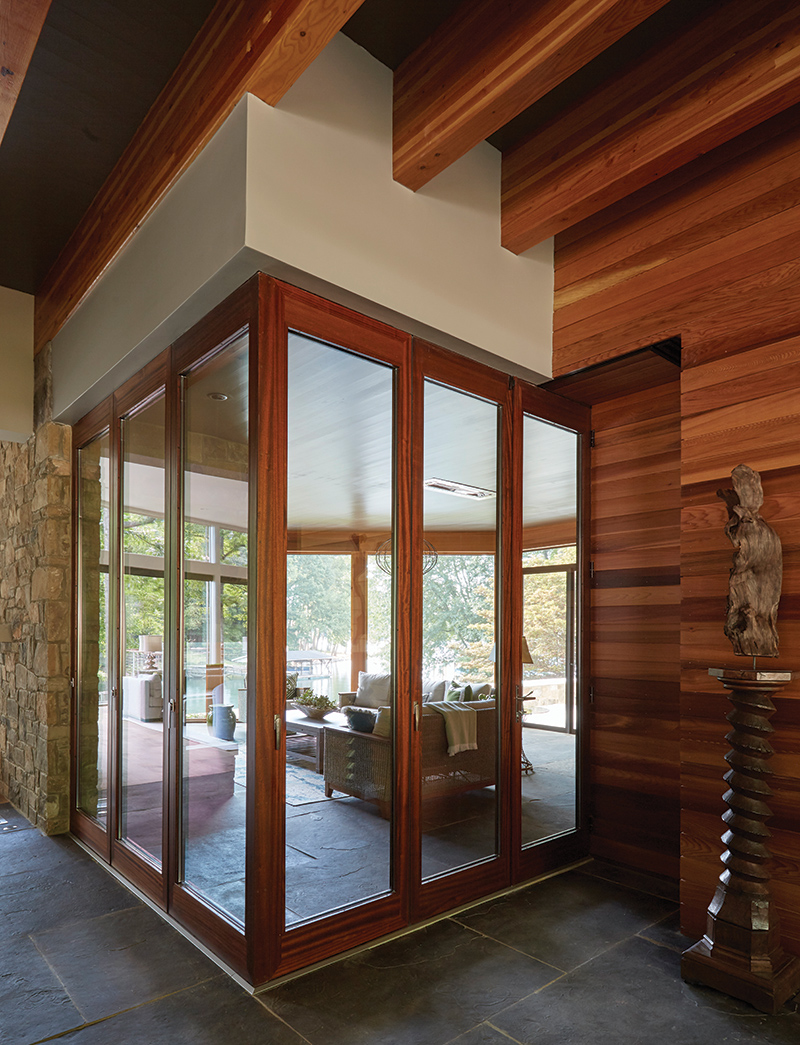 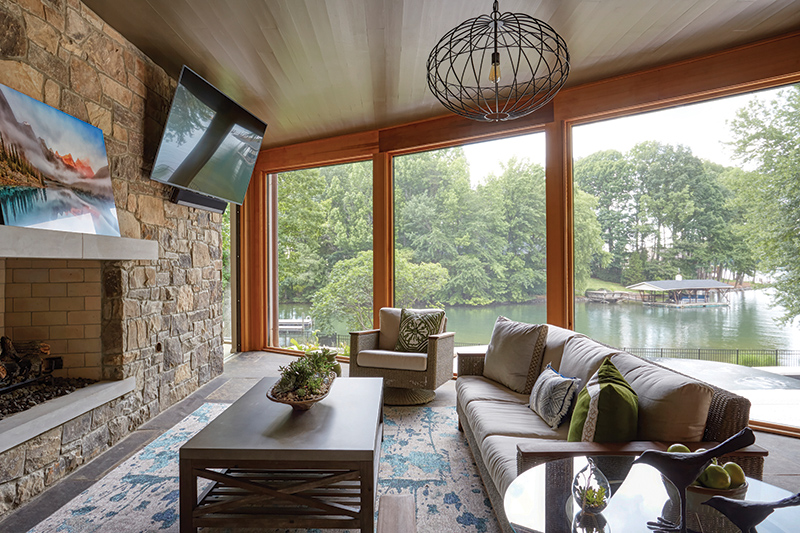 The lake house has elements of wood in almost every room, including the office, porch, and living room.

This article appears in the March 2019 issue of Charlotte magazine.
Categories: Feature
Contest of the Month