NO EXPERIENCES with a single piece of art are the same. Yet, immersive theater company XOXO provokes audiences in ways that produces experiences that vary wildly. Their performances are wide-reaching but nuanced, self-aware in its humor yet sincere. They purposefully disorient and physically divide viewers —and in doing so, make it difficult to communicate the gist of their productions on a mass-media platform.

I first experienced this with XOXO’s Bohemian Grove a few years ago, as a member of the audience transported on a bus into the woods of South Carolina. The strange tale ended in a time of contemplation under the stars, each of us taking a spot on the grass. Each audience member was asked to keep to themselves. Throughout the experience, they entertained, provoked, and bewildered us. But it culminated in that quiet moment alone, a gift of time to consider the experience and not immediately tweet about it. 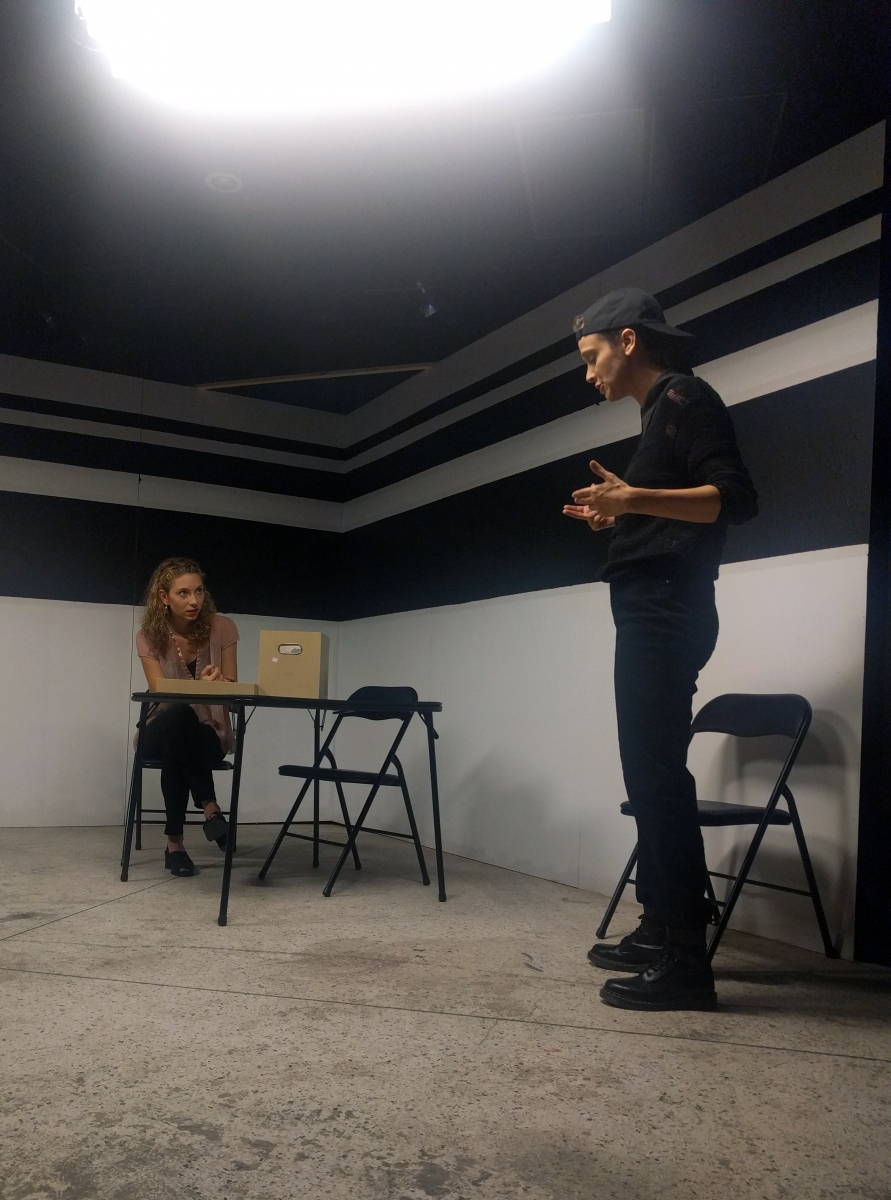 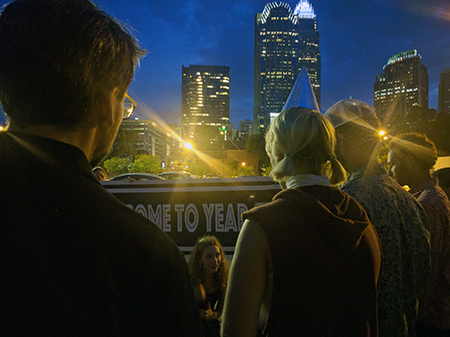 Top: Karina Caporino, who plays Davey and is XOXO's managing director, and Kadey Ballard (Jelly) in an early scene.

New XOXO production #CAKE (Year Zero), running through this weekend, is hosted at Goodyear Arts’ uptown location. For this writer, the engine of #CAKE (Year Zero)’s success is expectation. In its opening minutes, during a job interview between Maf Maddix's Paul and Bill Reilly's The Mayor, we only guess what XOXO’s getting at. Is this story toying with office politics or offering a broader, timeless meditation on power? Are we meant to see these characters as fully formed individuals or analogs of demographics? The answer, to all, seems to be “yes.” XOXO executive director and writer Matt Cosper and crew are purposefully vague and specific when they please, scattering brutally human moments across scripts lined with existential and cosmic explorations. XOXO plays with what we may expect may happen and delights in fulfilling and subverting those notions.

The Mayor runs some illegal operation (or several illegal operations) from his office, where much of the narrative unfolds. Jelly (Kadey Ballard) is new here, and quickly comes to see that the folks in charge aren’t lawyers after all. After the so-called “Unpleasantness,” some event or disaster that has caused resources to dwindle, the white, middle-aged Mayor continues to live lavishly. Lillie Oden's The Reverend, a character who represents those in need, becomes a makeshift hero against the despicable Mayor. It becomes obvious Jelly’s inaction to the insanity and politics contained within the Mayor’s offices isn’t sustainable, and she’s pulled into the action as an unwilling participant. Davey, a character who at first seems complicit in the fixed system or at least apathetic, develops as a catalyst for the tale's culminating madness. And when Davey ultimately makes their moves, the narrative goes into an engaging tailspin.

That’s the initial layer of #CAKE. And yet we find more layers in how we choose to interpret these characters. If Cosper’s The Mayor is a stand-in for a system designed to benefit the few, The Reverend is those who are trying to do good. This is a story set in a banking town for a production staged in Charlotte, so the parallels stack up quickly.

To dive further into the story would be a shame, because then your own experience would devoid of the surprises (and weirdness) that unfold. But I can tell you this: In XOXO fashion, audiences are given an extended period of autonomy to explore and reflect. But instead of the rural Bohemian Grove backdrop, it’s uptown Charlotte. During this third act, you’re armed with an MP3 player and promptly sent out into the streets. Depending on how you’ve chosen to interpret the story and if you’re alone or with a group, I imagine this part of #CAKE can be vastly different. On my own walk, I saw Charlotte's vibrant nightlife and sobering realities collide, a collection of presumably well-to-do and impoverished in disharmony as my MP3 player emitted slow-burning indie rock.

This is the final iteration of #CAKE, after years of development and workshops. It’s a bit more linear than expected; multiple planned sites are traded for a clever reimagining of the host building. Yet, XOXO has pulled off yet another strange, staggering night of theater. And though we may not have the same or even similar experience, I imagine that we’ll be contemplating #CAKE far longer than the third act allotted.

This article appears in the June 2017 issue of Charlotte magazine.
Categories: Arts + Culture
Contest of the Month