The home of next year’s PGA Championship isn’t just a golf course. It’s a rare green space in a growing city, and the people in charge of it don’t take that responsibility lightly

ON A SUNDAY EVENING in mid-August next year, a golf ball will fly toward the 18th green at Quail Hollow Club in the final round of the PGA Championship. It might be a Titleist or a Callaway or a TaylorMade, but that’s not all that important. What’s important is that the ball will land because gravity says so, and when it does, it will press against the tips of Champion Ultradwarf Bermudagrass that came to Charlotte in a refrigerated truck from a Texas turfgrass farm that used decades of genetic research to develop the grass. The Charlotte soil that received and accepted the Texas company’s genetically engineered Bermuda grass is some of the most nutrient-rich soil in the country. It’s a mixture of sand and blended soil and worm castings from a worm farm in Cheraw, South Carolina, about 70 miles southeast of Charlotte.

“Largest worm farm on the face of the earth,” says Ron Danise, the owner of Southern Organics. (He later corrects himself to say it’s definitely the largest in the country, but he’s not sure about the world.) “We can produce 50 tons of worm castings a day.”

And what are worm castings?

And what did the worms eat that helped them make all this, um, poop?

They ate compost that had been breaking down for 12 to 14 months. That compost was then mixed with other materials, such as hay scraps and other organic matter from Danise’s 560-acre organic farm. The vermicomposting portion of the farm is a 385,000-square-foot, indoor facility that used to be a cotton mill. It’s now home to the European night crawlers that ate the compost that made the poop that gave the soil the nutrients it needed to house the grass that made the greens that will receive the ball that will win one of the biggest events in golf.

“It all already had a life before,” Danise says of the food the worms eat. “We try to find cycles.”

Beliefs like that made Danise and his worms the natural fit for Quail Hollow.

Few places in Charlotte are reimagined more frequently—and more privately— than the exclusive club on Gleneagles Road. This past May 8, as soon as the last group teed off on the final day of the Wells Fargo Championship, construction crews descended on the course and began a 12-week renovation process that would have taken five or six months on most other courses. But Superintendent Keith Wood didn’t have that kind of time. The club’s president, Johnny Harris, wanted to have the course open to members by the fall.

That led to one of the most remarkable renovations of a golf course in the country, involving three new holes, overhauled fairways, reshaped greens, and the addition of areas for grandstands and spectators—all in three months.

“I don’t think I’ll ever come up with any project like this again in my career,” says Wood, a 20-year veteran in the industry.

In some ways, Quail Hollow stands apart from the rest of Charlotte, with fences around it and many of the city’s wealthiest and most influential people as members. But in other ways, it’s as pure a Charlotte story as there is—a course that opened in 1959 on what was then wide-open farmland, then built up and up, and over and over again. A golf course, after all, is made only of things that grow, which means work on a golf course is never finished. 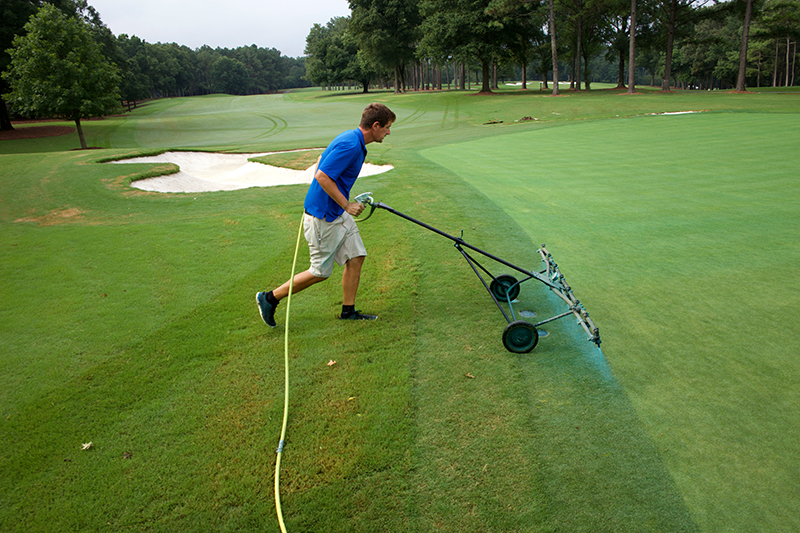 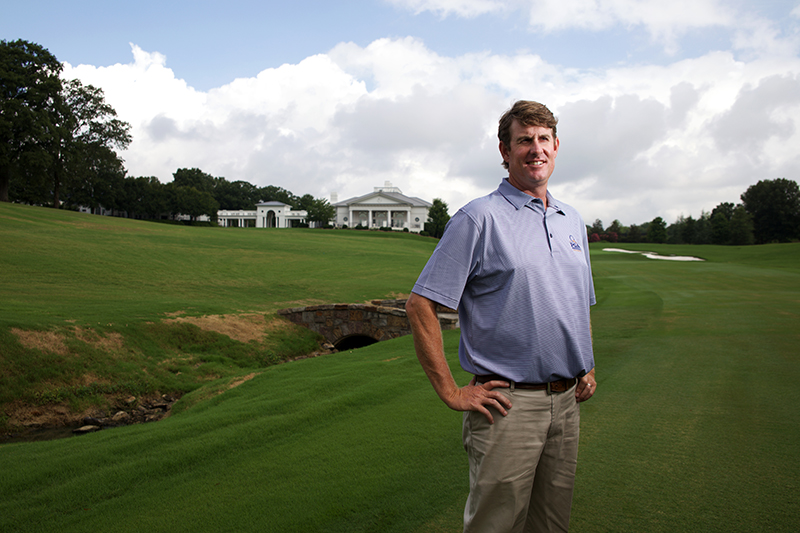 Top: During the last week of course renovations in August, workers such as Luis Pinto hustled to get Quail Hollow ready for members. Bottom: Keith Wood was superintendent at Sedgefield Country Club in Greensboro— home of the PGA Tour’s Wyndham Championship— before moving to Quail Hollow in 2015.

A LITTLE MORE than three years ago, Quail Hollow’s greens were made of bentgrass, which thrives in cool weather, making it a great playing surface in the fall and spring. This was hardly unique in the region. From the 1980s to the late 2000s, most non-coastal courses north of Georgia used bentgrass. They’d been scared away from Bermuda grass by an extremely cold winter in 1976-77 and another in 1984-85, which left many Bermuda grass greens bare the following springs and summers.

For 20 years, bentgrass greens held strong as the preferred brand for North Carolina golf courses, until back-to-back scorching summers in 2009 and 2010 burned greens throughout the state.

By then, turfgrass farms were producing stronger strains of Bermuda grass that could live through winter—with the help of tarps to cover them on the rare nights that dipped below 27 or 28 degrees.

Quail Hollow experienced a difficult year in 2013, when strained bentgrass greens were spotty and patchy for the Wells Fargo Championship, and several players withdrew. “It’s the hardest thing I’ve ever been through,” Harris later told The Charlotte Observer.

Later that year, the club installed miniverde Bermuda grass. In 2015, Quail Hollow hired Wood away from Sedgefield Country Club in Greensboro to take the old course into the future.

He started at Quail Hollow one week before the 2015 Wells Fargo. He and his team decided to keep the miniverde greens through 2016. (“We got by,” Wood says of this past year’s tournament.) But given the importance of the PGA Championship, he and Quail Hollow officials decided this summer they would install the new Champion Bermuda grass. And while they were at it, they’d rebuild much of the course. 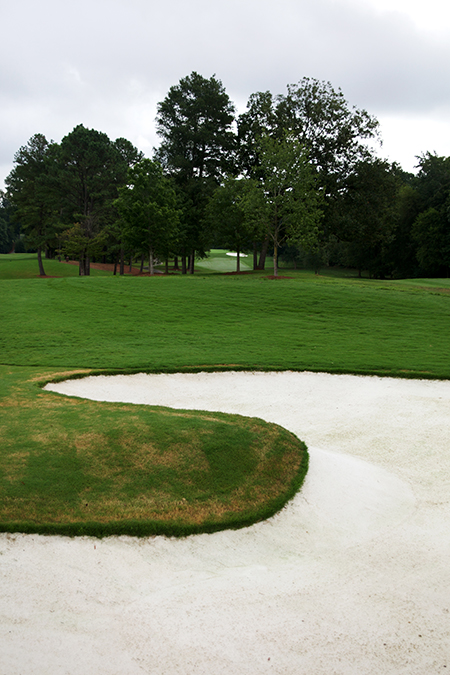 As part of the renovations, the club created some holes where grass on the edge of fairways is cut close around the bunker—which might lead to an extra ball or two trickling into the sand.

ONE DAY this past May, Wood found himself on the fifth tee, looking over the shoulders of course designer Tom Fazio and Kerry Haigh, chief championships officer for the PGA. Fazio pointed out toward the fairway, which doglegged left around a line of trees and toward the green. Then Fazio moved his arm left.

“What if we cut those trees back?” Fazio said.

“I’m standing back here like, ‘I just don’t know what he’s looking at,’ ” Wood says, standing on the fifth tee again recently. “There’s definitely an art to what those guys do.”

And a lot of dirt shifted. Quail Hollow hired six companies for construction, from earthmovers to contractors that build golf holes. On the first full day of renovations, May 9, crews removed 800 trees on the course. Over the course of the summer, that number swelled into the thousands. Most of them were small, and they all came out in an effort to make the environment healthier in other ways.

The new Bermuda grass greens require lots of sunlight. So the trees around them needed to go. In their place, Quail Hollow’s horticulture team will plant rhododendrons, hydrangeas, and crape myrtles. The team also is planting other trees that will grow large again, just in better locations. The idea is to have a diverse mix that will ensure that something’s in bloom throughout the year.

“Mr. Harris wants color every day of the year,” Wood says of the club president. “He wants this to be like a park.”

Throughout the renovation process, crews took into consideration the environment around the course. At least three bald eagles live on the property, including one that was rehabilitated at the Carolina Raptor Center earlier this year. When the raptor center released the eagle at Quail Hollow in March, it announced that the eagle’s name would be Rory, after Rory McIlroy, a two-time winner of the Wells Fargo Championship. 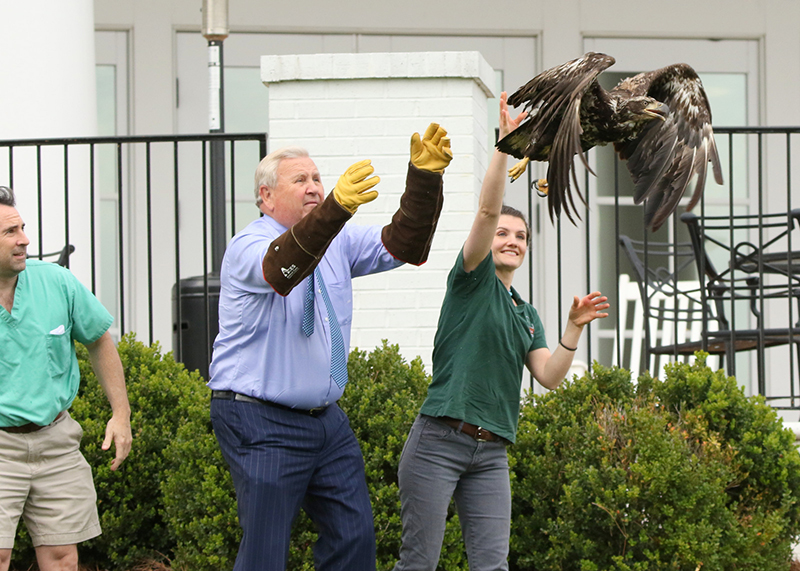 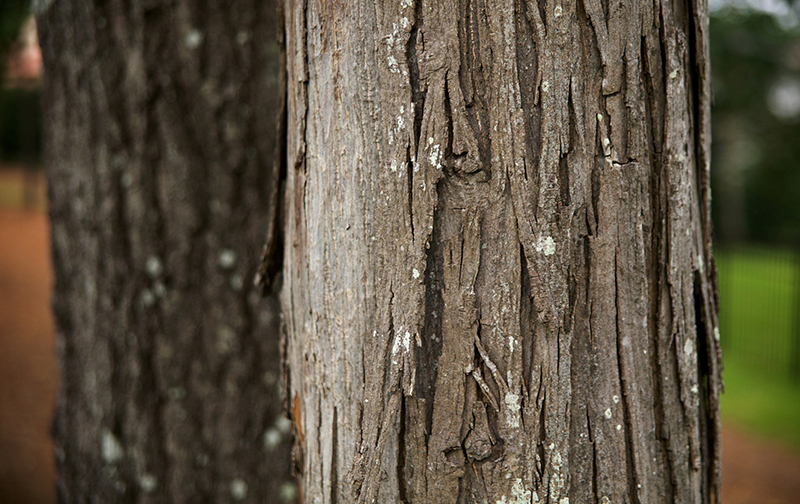 Top: Club President Johnny Harris (left) and Carolina Raptor Center employee Kelsey Conroy release a rehabilitated bald eagle named “Rory” in March. Bottom: Even the texture of a shagbark tree, which adds to the visual variety of the course, does not escape the notice of superintendent Wood.

IN MID-AUGUST, Bloomberg News posted a story called “America’s Golf Courses Are Burning,” which said that more than 800 golf courses around the country have closed in the past decade. The recession was a huge blow—many of the new courses being built in the late 1990s and early 2000s were tied to housing developments.

Still, in a city such as Charlotte, golf courses are some of the rare large tracts of green space.

“Golf courses are becoming the prairies of old,” Wood tells me this past August, as we stand in the middle of the first fairway, looking down to the new first green, which sits in the same spot as the old second green. “This area becomes very important for our environment. We have a lot of bald eagles. We have a lot of compost. You need to embrace these places now, because a lot of that’s going away.”

The attention to the environment makes someone like Danise, who has been involved in organic farming since the early 1980s (“before it was chic,” he says), say he’s proud to partner with the club. Southern Organics sent about 20 truckloads of its soil mixture to Quail Hollow during the renovation this summer. Each truckload contained about 20 tons of material, all waiting for that Bermuda grass from Texas.

“They’re making judicious and good decisions for the environment, and they’re getting results,” Danise says of Quail Hollow.

After riding around Quail Hollow in his golf cart on that August day, Wood pulls up to the 18th tee.

“Look over there. Remember what was there?” he says, pointing to the left side of the fairway, which is now just a dirt-covered hill that’s been raked flat. “That was all trees.”

The new area will be home to grandstands. Wood drives up the fairway with nobody around and imagines spectators taking their seats. He imagines the sound of cheers. He looks forward and points to where the new line of greenside grandstands will be during the tournament, standing between the 18th hole and the clubhouse. He knows he spent the summer of 2016 doing all he could do to get ready for the summer of 2017. And now?

“All we can do is hope that it comes down to the last shot on the last day.”

Michael Graff is the editor of this magazine. Reach him at michael.graff@charlottemagazine.com or on Twitter: @michaelngraff.

QUAIL HOLLOW RENOVATION BY THE NUMBERS

10 weeks to complete green renovations
800 trees removed on the first day of renovations
20 truckloads of soil shipped in from Southern Organics in Cheraw, South Carolina
3 new holes (The old Nos. 1 and 2 were combined into a new No. 1; the old No. 5 is now two holes, Nos. 4 and 5)

This article appears in the October 2016 issue of Charlotte magazine.
Categories: In Print, PGA, The Buzz