For decades, the intersection of W.T. Harris Boulevard and North Tryon Street was little more than a rural crossroads. The Mecklenburg County Poor House operated there from 1904 until 1957, when it became the Green Acres care facility. Five years later, Charlotte College established a 1,300-acre campus in the neighborhood (and would become UNC Charlotte shortly after). Then, in 1984, what is now Atrium Health opened a hospital on the Green Acres site. That once-quiet crossroads became the busiest intersection in North Carolina, where, today, light rail trains whiz overhead.

Tobe Holmes joined University City Partners, which promotes the area’s economic vitality, as planning and development director in 2015. The organization tasked him with developing a strategy to guide the neighborhood’s next 20 years of development. The plan, released in November, capitalizes on existing assets, including the university and hospital, and lays out a modern vision for this northeastern pocket of Charlotte. “We already have all the pieces of the puzzle,” Holmes says. “It’s just a matter of making them connect better, so we can be a better version of what we are today.” 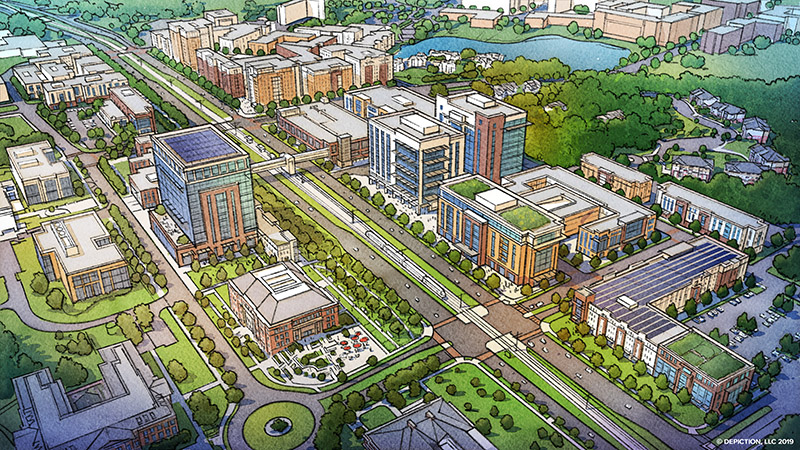 The University City Vision Plan will guide the neighborhood away from car-oriented development (top) and toward a pedestrian-friendly model that unites urban and green space (above). COURTESY UNIVERSITY CITY PARTNERS.

University City, which encompasses a roughly 3-mile radius from the W.T. Harris-Tryon intersection, is in many ways a classic suburb. Unlike the mixed-use developments in vogue today, the University Research Park, founded in 1966, is all business; the 450-acre site still houses East Coast headquarters and outposts for Fortune 500 companies like Electrolux. Most of the shopping centers along North Tryon were built between 1984 and 2005, and they reflect the era’s automobile obsession: huge thoroughfares, sprawling parking lots, big box stores.

But the neighborhood is also home to plenty of natural settings that seem a world away from the exhaust-choked main drags. “It never fails to amaze me when I walk from University Place down to Barton Creek Greenway, right off the Mallard Creek Greenway,” Holmes says. “You’re standing in the town center of University City, and 10 minutes later you’re standing in the middle of the woods. And that is what I conceive of as what suburbia was intended to be.”

The suburban format—as opposed to rural or urban—dominates every American city, and it’s not hard to see why. The suburbs were conceived as a place where you could have it all: nature, lots of space, a quick commute, and acres of free parking. Parts of that model are worth holding onto, Holmes believes, but other parts will have to adapt as city dwellers ditch the car and embrace transit. 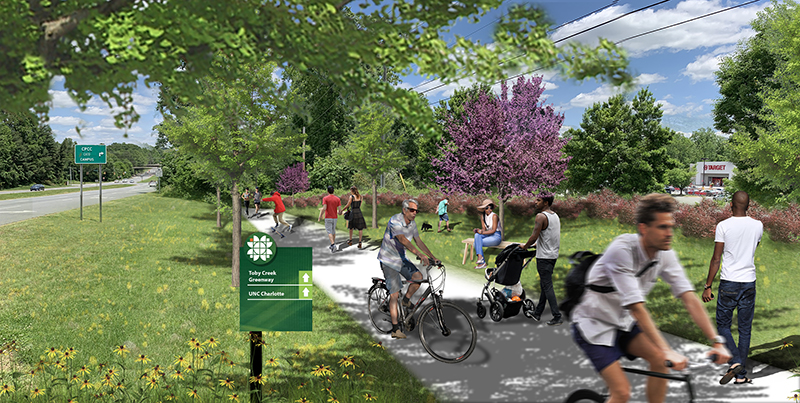 All of the University City Vision Plan’s 10 key strategies, from pedestrian safety to housing diversity, dovetail with the goals of Charlotte’s 2040 Comprehensive Plan, which the City Council adopted in June and will guide the entire city through this inflection point. While the University City plan is not a binding policy document, Holmes says that “both the comp plan and our vision share a lot of aspirations for the future and, honestly, a lot of hope that we can achieve what we said we would achieve.”

University City, which welcomed the Blue Line in 2018, is well positioned to navigate that transformation. “Here, in this place, there are the ingredients to start to figure out how we change what so much of America is,” Holmes says. “To be something that reflects a more walkable, bikeable place that is able to host so much more than the commercial strips you see as you ride down the road.”

The University City Vision Plan conceives of a town center around the JW Clay light rail station, which provides easy access to the university, greenway, and hospital. (The multimodal North Bridge, expected to open in 2024, will cross over Interstate 85 and connect the University Research Park to the center of University City, too.) At the town center, a north-south urban axis will intersect with an east-west “greenbelt.”

The urban axis will prioritize entertainment, apartments, and pedestrian shopping and dining districts, where canopy trees will shade sidewalk seating. The boardwalk and lake at University Place, built in the 1980s, will become a center for cultural events, public art, and fitness—a showpiece public space akin to Bicentennial Park in Columbus, Ohio.

The plan reimagines the traditional intersection of “Main and Main” as an intersection between Main Street and greenway. The greenbelt will capitalize on the existing 14 miles of continuous greenway and provide a focal point to develop 1.5 acres of green space per 1,000 residents. (University City has zero parks.) The greenways will unite recreation and transportation, with safe routes to scooter and bike to work, school, and the light rail.

The focus on carless transportation is part of an ambitious transit-oriented approach that integrates 10-minute neighborhoods and “last-mile” solutions, which help transit riders safely navigate the last mile home from the bus stop or train station. “Ten years ago, you could barely drive in this community without touching a major thoroughfare,” Holmes says. “And 10 years from now, you’ll be able to ride your bike or walk from light rail station to light rail station in a way that isn’t just safe but in a way that feels safe.”

University City Partners conducted 12 interviews, three focus groups, and a number of vision sessions, surveys, and presentations to find out what local residents and employees wanted. One survey was exclusively about crossing the street, and 65% of respondents said walkability in University City was poor. Almost the same percentage said that walkability was an important factor in deciding where to live.

Every now and then, a longtime resident sends Holmes photos from University City’s past, valuable reminders of what merits preserving as he looks ahead. “History isn’t always in the age of the building; it has a lot to do with who’s in the building and the community around the building,” Holmes says. “Those pictures make me remember that this is a community, and it’s been a community for a long time.”

That community is a hotbed of talent and diversity. UNC Charlotte turns out more engineering and technology graduates than any other university in the state, and Holmes believes the neighborhood will lure more and more businesses, which increasingly value diversity of thought and experience. The mix of residents includes students, old-timers, young families, and a huge range of nationalities, but Holmes found a surprising unifier: They’re ready for change. University City was built in a bygone era. “People,” he says, “are excited to see those things change into something else.”

The University City Vision Plan offers a way there, and progress has already started. University Research Park is  incorporating multifamily housing and townhomes. New bike lanes and sidewalks border McCullough Drive, and greenway improvements are in the works. Water’s Edge, a redevelopment of University Place, broke ground last year. By 2040, if the plan is realized, University City will have thoroughly transformed the suburban way of life. “I don’t think suburbia is the right word for it anymore,” Holmes says. “It’s definitely more modern, but it holds on to what the best parts of that foundation are.”

One old photo stood out to Holmes. It showed the W.T. Harris-Tryon intersection, back when the light rail was still 50 years in the future. The picture was a testament to how fast and how much things can change, something Holmes bears in mind as he plans for a University City that’s still decades away. “Let’s not think something’s not possible today, because tomorrow it may be,” he says. “So let’s get started.”

43,000 residents. Nearly 55.5% are between 20 and 39 years old, which makes University City the youngest neighborhood in town.

14 miles of greenway, the longest contiguous greenway in the county.

4 light rail stations. JW Clay is the fourth-busiest station on the Blue Line.