Island Within an Island 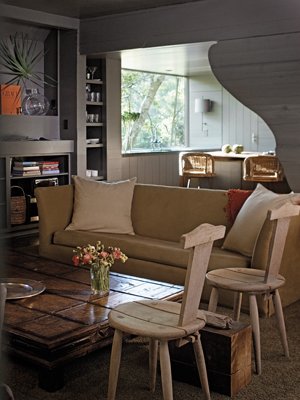 A curving, carved wood partition is all that divides the living area from the kitchen. "For me, this house was an opportunity to test some ideas, and this was one of them," says Veltman. He purchased a pair of rustic-looking chairs at an antiques store. "They complement the space, but at the same time are animated and whimsical. So there’s this one little unexpected gesture to throw things off."

In their search for a summer retreat, Ruard Veltman and his wife Millicent passed over dozens of listings for bright, airy beach houses. What caught their interest was a photo of a house they could barely see: a simple, wood-roofed structure obscured by foliage. When they drove by — no simple feat, since the house was on Bald Head Island, an island thirty miles south of Wilmington and accessible only by ferry — their instincts proved dead on: "There was this sense we were in a heavily wooded forest, plopped down on an island," says Ruard.

And then there was the real selling point: an open-air octagonal room that Ruard, who worked for Bobby McAlpine’s Montgomery, Alabama firm and now has his own eponymous architecture and design business in Charlotte, immediately saw as his studio. Built above a crofter, the name islanders give to the small garages where they store the golf carts that are their primary mode of transportation on Bald Head, the room enjoys a 360-degree view of palms and oak trees. "It’s my escape, my own little island within an island," says Ruard.

Built in 1989, the house was in decent shape, but one thing was wrong: "The interior was peach sheetrock," says Ruard. His first task was to rip out every bit of sheetrock, replacing it with wood planks or painted wood for added warmth and texture. "We wanted to continue what was started on the outside and react to the environment," he explains. "At the beach, everything is light and airy and wants to be bright. We were in the woods and I wanted the complete opposite of that: warm and cozy."

Those sound like unlikely adjectives for a beach house, but Ruard, who was born in Germany but is a Dutch native, was drawing on a Dutch word, gezellig. "It means being comfortable and intimate and around friends, the sense that everything is at peace," he says. "I grew up with that idea and it’s one that I’m constantly trying to achieve in my work."

This house is very much a cozy family home, designed around how the Veltmans and their kids — son Fritz, three, and daughter Perrin, two — live at the beach. And that lifestyle is usually exactly the opposite of how they live in their urban bungalow five minutes from uptown. "Beach living is about keeping things simple," says Ruard. "You typically live in one space, you wear the same clothes, and you cook every meal. It’s completely unlike being in town, where we’re always on the run. That’s what makes this such a good escape."

To play up that one-room, beach cottage simplicity, he opened up the kitchen to the main living space, using only a sweeping partial wall carved from wood as a divider. "It was designed as if it were a drape being pulled back to reveal the house," Ruard says. The ceiling in the kitchen area was strategically lowered to enhance the effect of the single plate-glass window that replaced the others in the room. "The idea is to feel warm and nestled, but then have this great release out into nature," he explains.
Most trappings of a modern-day kitchen are camouflaged, helping the space blend seamlessly with the adjacent room and maintaining its rustic, cabin-like feel. The only visible appliances are the sink and range, stand-ins for a lake and a campfire. "So many of my decisions were based on what I could find [at the island’s only hardware store]," admits Ruard. Thoroughly utilitarian stainless steel countertops are the one modern touch, and have the added bonus of bringing light into the otherwise dark space.
The same play of dark and light is echoed in the master bedroom, where a headboard made from a piece of reclaimed oak barn siding contrasts with the stark white walls. There are no drapes in this, or any, room. "We keep the windows open, and wake up when the sun comes up," says Ruard. Because the property is so secluded, with no neighbors, privacy is never a concern. "As soon as we have neighbors," he says, "I think we’ll move."

Jill Waldbieser is an editor and writer whose work has appeared in Women’s Health, Popular Science, Philadelphia HOME, New England Travel & Life, among other titles.