Charlotte mag's restaurant critic offers his take on two of the hottest restaurants in Las Vegas: ridiculous, but in a sort of good way 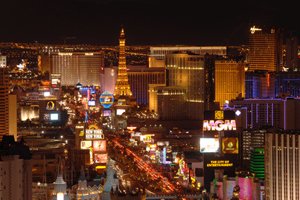 Let's face it, Vegas pretty much sucks. And contrary to the popular tag line, what happens in Vegas doesn't always stay there. Sometimes it stays with you. And depending on the nature of your experiences, what happens can either delight or horrify you for years to come. Unfortunately, the horrifying memories can outweigh the delightful ones tenfold, so tread lightly in sin city my friends. Tread lightly indeed, as the jackals are everywhere.

My advice? Pay close attention to the comforting odors wafting above the thick web of mayhem and vice—truffles, Kobe beef, and foie gras. Yes, it is true. Gone are the days of the buffets and rubber chicken. Oh, they're still there, but thankfully not your only option anymore. In the past ten years, Las Vegas, in spite of having no ethnic neighborhood cuisine to speak of, has nonetheless evolved into a culinary destination, with the number of great restaurants increasing every day.

The primary catalysts for this are explosive growth and dueling "me too" billionaires. Wynn, Trump, and their well-heeled ilk are playing a freakish game of one-upsmanship that we may never see again. The latest is the $7 billion-dollar project by MGM Mirage. Take THAT, Donald!

Most of the opulence makes you want to hurl in your soup, not to mention the countless millions of people mindlessly pumping their paychecks into slot machines. And the smoke. Oh dear God, the smoke, emanating from every blue head in Vegas. I thought smoking was bad for you. Turns out, you'll live to be a hundred.

But lets focus on food. Thankfully, some very talented chefs are cooking some very good food in Las Vegas, and an expedition to one of these restaurants is a delightful break from the fear and loathing. Like Thomas Keller's simple yet elegant Bouchon—his homage to French Bistro cooking. Keller's uber-anal attention to detail and ethereal culinary instincts—which elevated him to God-like status with Napa's The French Laundry, as good a culinary experience there ever could be—shows everywhere here, like in the perfectly smoothed butter ramekins served with a loaf of braided ficelle. This simple act of bread and butter seems, well, just better than anywhere else. And the frites are as good as any in Paris. Also on the ample and clever menu (it's printed on folded parchment paper and doubles as your placemat) are luscious braised short ribs, briny fresh oysters, fresh fish, and a perfect roast chicken. Nothing over the top, just perfectly cooked, satisfying food. The place is comfortable, too. Far away from the floor, Bouchon is nestled into the corner of the Venetian on the 27th floor and overlooks a beautiful garden terrace. Nice for a cozy dinner and casual enough for a group of friends.

Craftsteak is Tom Colicchio's (Gramercy Tavern, Craft, and Bravo TV's Top Chef) version of the contemporary modern steakhouse. Located in the MGM Grand, it is a beautifully designed restaurant that combines warm wood tones and textures with comfortable setting and fantastic service. These touchpoints complement the considerable a la carte menu and 500+ selection, downright obnoxious wine list. (Nothing on it worth drinking is under $100, and it maxes out at multiple offerings for five figures. Just hope you have a well-padded expense report or you pulled the ace on an inside straight.) But the food kicks total ass. Incredibly flavorful steak is the draw. Marbled cuts of American and Australian “wagyu” kobe beef in various forms—strip, filet, and ribeye to name a few. And there's the Japanese "wagyu" beef. I wish I had the balls to order a $240 steak. For that kind of scratch, there had better be a happy ending. Also surprising is the amount of fish and shellfish. Delicious oysters, prawns, lobster, and snapper. Sides are impeccably flavorful and add a modern flourish to classic dishes like baby spinach, fried zucchini blossoms, and green beans. Steakcraft is laughably expensive to the point of stupidity, but it's a great experience in a hip setting, if you can afford it.

The list of other well known and award winning chefs are far too numerous to mention, but here's a partial list: Lagasse, Robuchon, Trotter, English, Puck, Boulud, Palmer, Flay, Ducasse, Batali and Vongerichten. Staggering, actually. And the list is also growing, so the next time you are tempted by the Peppermint Rhino, the roulette wheel, or Jada—who is a "dancer and an entertainer…" — remember that there's Osetra caviar, pristine tuna, and Kobe ribeye to tempt you as well. Here's to making good choices.

This article appears in the June 2008 issue of Charlotte magazine.
Contest of the Month