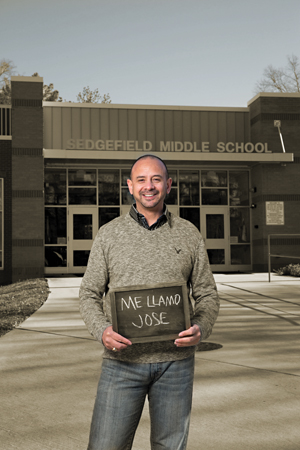 I moved to Charlotte from Colombia in 1977. I was 12, just starting seventh grade and didn’t speak any English at all. It was a confusing, difficult time, but my memories are vivid.

There was no education about diversity then. I went to Kennedy Middle School, then Sedgefield. Kids would try to talk to me, but I couldn’t communicate with them, and they didn’t understand why. They thought I was rude. There was still a lot of tension between blacks and whites, and I remember kids holding their arms up to mine, curious about my skin tone. They didn’t get why I wasn’t black or white, but some tone in between. Children back then were struggling to understand race.  They were trying to adjust to being together, and it resulted in a lot of fights. No one wanted to get kicked out of school though, so they would make appointments to beat each other up after class. I was asked to choose which side I would be part of. I refused to do it. Race was not an issue where I was from, and to come here and to be asked to identify myself in that manner—it was very hard.

One kid kept telling me to wait—he was signaling with his hands every time he saw me. I knew what he meant: wait until after school. My stomach dropped. I tried to tell a teacher but didn’t think she understood. At the end of the day, he started following me with two other boys. I was so scared. Then that teacher walked up and took them back into the building. I don’t know what she said to them, but they didn’t bother me again. She saved me. I still remember how grateful I was that she intervened, and it’s a big reason why I now help students who are going through the same kinds of things. I ended up studying education and psychology, and now I work for CMS.

About halfway through my first school year at Sedgefield, the district started identifying non-English-speaking students. We were all put in one classroom and spent all day with one teacher. Hard to believe now, but there was only one other Hispanic kid in the class; the other students were from Greece, Vietnam, even Saudi Arabia. Our poor teacher had no training in dealing with different ethnicities. He was great, quite the character, but he had a hard time. He didn’t have any textbooks, so he just made things up as he went along. He would play this one Pointer Sisters song, and we’d have to sing along. We could sing English before we could speak it.

The other day, I ran into one of my old Vietnamese schoolmates at a diner. We were friends, but we never spoke, never understood each other verbally. We immediately starting chatting—catching up—and then suddenly it hit us: it was the first time we were able to communicate with each other in English. —As told to Melissa Hankins