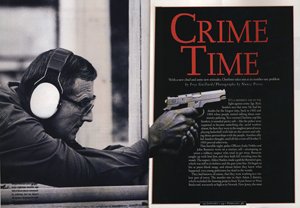 In honor of our fortieth anniversary, we look back at some of articles that have shaped Charlotte magazine.

Writer Frye Gaillard's provocative 1996 piece Crime Time addressed the same issue that plagues the city today: What do we do
about the increase in crime? While local TV affiliates and even the newspapers covered the  obvious topics ("As one news anchor admitted with regret," Gaillard recalls, "the broadcasts were starting to become ‘an endless parade of body bags' "), Gaillard dug deeper. "We decided to take an even-handed look at a big city problem driven in part by the demand and availability of street drugs," says Gaillard, a longtime Charlotte investigative journalist who is now a professor at the University of South Alabama. "But we also looked at the serious attempts to work on the problem, particularly the brave and promising work that was then being done by community policemen."

And yet, twelve years later, in spite of the ongoing discussion between community leaders and our police force, the crime climate here is still just as tense, if not more so. As our 2007 series showed, there's a constant pointing of fingers as to who's responsible and the looming question of what method of policing actually works. "I think there are lessons to be learned even now from the struggles against crime in the 1990s," says Gaillard.

This article appears in the June 2008 issue of Charlotte magazine.
Categories: Archive Department, News – Web Exclusives
Contest of the Month