THE MEASUREMENTS HAD BEEN taken. Everything was set on the day they would put in the last piece of their kitchen. Yet when the oven arrived at Kabab-Je Rotisserie & Grille, the box was bigger than expected. The expensive, custom-made, 2,200-pound pita oven that traveled all the way across the country to get here couldn’t fit in the front door.

After brainstorming, Kabab-Je’s owner, Yasser Sadek, had an idea. They could break through the wall of the adjoining, unoccupied space. He spoke with the landlord and after assuring him that the damaged wall would be fixed, he got the go-ahead. And with that, the pita oven took its place at Kabab-Je, where it’s constantly producing bread that customers covet. Monday through Thursday, the oven churns out about 150 pitas a day. For the larger weekend crowds, the number rises to 300.

July marks the second anniversary for Kabab-Je, located in Matthews. Sadek, though, has worked in the Charlotte restaurant business for about 35 years. After spending many years co-owning and managing a fine dining restaurant, he decided what he really wanted to do was open a small restaurant that served authentic Lebanese food—the food he grew up with in Lebanon. The food he and his family cook and love.

The crowd here is diverse, with diners wearing everything from jeans and baseball caps to suits and ties; hijabs, high heels, or high tops. The customers come from different backgrounds and speak a variety of languages. Regulars love to bring new people here. You hear them telling Sadek, “I brought my [friends/co-workers/family],” and the smiles are universal. You see them softly closing their eyes, the way people do when they’re savoring something delicious. Dishes get passed around the table because, “You have to try this!” 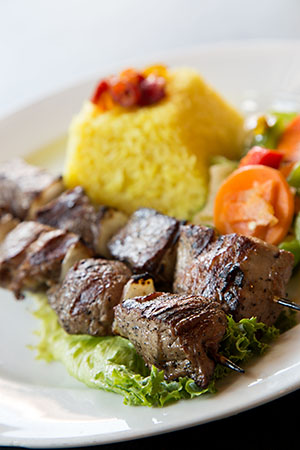 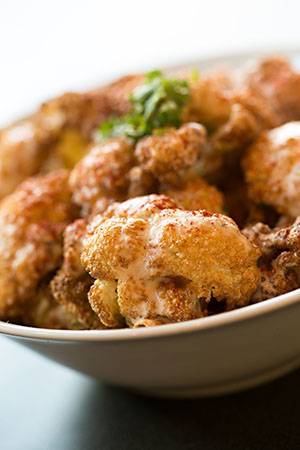 Fried cauliflower served with a tahini sauce and chopped parsley. 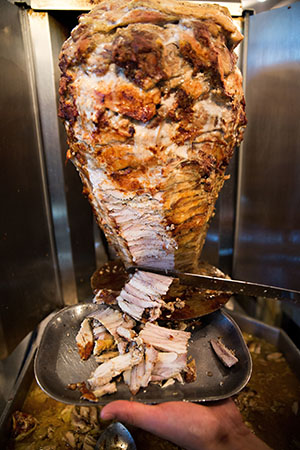 Kibbeh plate, a deep-fried shell of lamb filet and cracked wheat, stuffed with spicy minced lamb and onion; lamb and beef shawarma is carved from a meat tower. 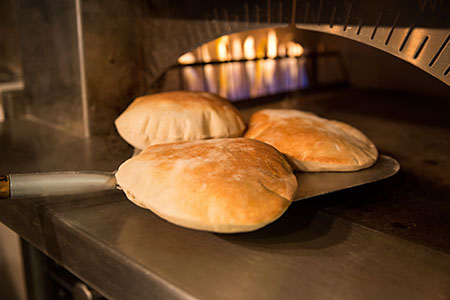 Fresh pita comes out of the pita oven.

Although Kebab-Je never had a problem finding a customer base, Sadek struggled to find the right chef. Neither of the first two candidates he tried was able to produce food that lived up to his standards. He tried working with them in the kitchen in order to make improvements, but wound up having to do most of the cooking himself.

A friend in the restaurant industry in Detroit, which has a large Middle Eastern population, told him about a chef named Nasim Hussin. Sadek spoke to Hussin on the phone several times, even on FaceTime. Sadek asked him to come to Charlotte to interview. “First, he came here and ate,” Sadek says. Then, he came back when the restaurant was closed. It was just the two of them, the restaurant owner and his potential chef. “Make me hummus,” Sadek told him. The hummus was authentic, and Sadek kept making requests. He asked for fattoush, tabboulieh, and Lebanese garlic sauce. As Sadek tried each dish, he knew it was different from the previous chefs’ work. Everything tasted as it should. “These are the bread and butter of the Lebanese food,” says Sadek. “The food was delicious, and in line with our recipes,” he says, referring to recipes that have been in his family for years.

He was almost sure he had found his chef. It was time for the final test. “Build me a shawarma,” he said. Within minutes, Hussin had constructed the cone-shaped meat tower Sadek was looking for. Two weeks later, Hussin moved from Michigan to Charlotte.

There’s a reason Hussin’s shawarma was a telling moment. It’s a difficult dish to get right, and doing so depends on several factors: the types of meat used, (at Kabab-Je, it’s lamb and beef, or chicken); the way the tower is constructed; the way the slowroasted finished product is sliced. Here, the shawarma reigns supreme.

And that pita oven? Each day, fresh, homemade pita bread rises and puffs up before deflating into the flat, familiar shape most people recognize. This slightly charred, slightly chewy pita tastes nothing like the mass-produced product often served in other Middle Eastern restaurants.

The kitchen is in the dining room, surrounded by tables on the sides and front. There’s also an impressive glass display case with a wide assortment of offerings, such as assembled but uncooked beef, chicken, and lamb kabobs; homemade desserts; tabbouleh and spicy Lebanese salad; spinach pies and meat pies, and homemade pickles.

Lebanese food is generally healthy, relying on herbs and spices for flavoring, along with the frequent use of olive oil and lemon. Much of the food is grilled or baked.

“Whether dining in a Lebanese home or at Kabab-Je, every dish is prepared fresh,” says Sadek. Freshness is a hallmark of Lebanese food and something he prides himself on. Although certain dishes are commonly found across Middle Eastern cuisine, Kabab-Je offers several Lebanese standards. Kibbeh, a dish of spicy minced lamb, mixed with cracked wheat and onions, is a favorite, and several flavors of Lebanese pizza are on the menu.

Visual appeal is also important at Kabab- Je. The plating is simple but attractive. The reasonably priced portions are large, and several come with a side of the mouthwatering garlic sauce. Entrées (except the veggie plate) come with basmati rice and grilled vegetables.

People come from all over North Carolina and neighboring states to visit the restaurant. Even those who were previously unfamiliar with Middle Eastern cuisine become regulars here. As they stream in, Sadek greets them warmly with a handshake or a hug. He has natural charm and charisma, and it’s clear he is as much a part of Kabab- Je’s appeal as the food. 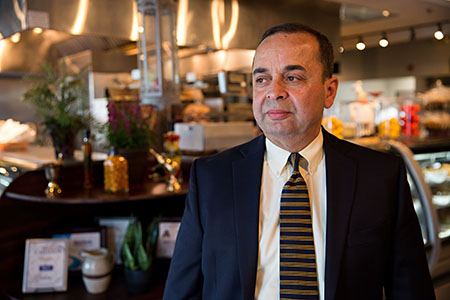 This growing following keeps the dining room packed at lunch and dinner, and Sadek plans to open a second location in south Charlotte. Members of the capable wait staff keep everything on track. They weave in between about 25 tightly arranged tables in the dining room, taking and delivering not only orders, but also friendliness.

Go on a Friday or Saturday night and there will be a wait. Because the space inside is tight, people often wait outside—and they do it gladly.

“I hate turning people away,” says Sadek. “I don’t like for anyone to have to wait. It’s a problem.”

Then he smiles, and corrects himself.

“It’s a good problem to have.”

This article appears in the July 2015 issue of Charlotte magazine.