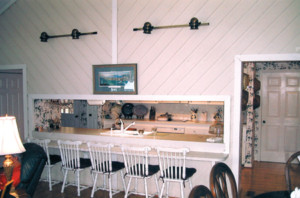 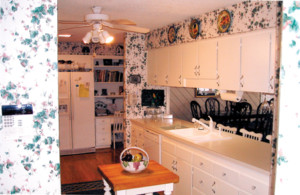 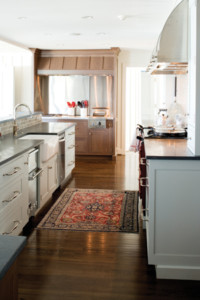 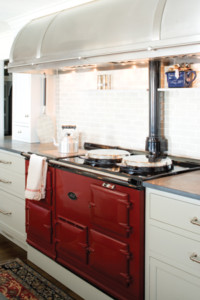 Empty nesters Joan and Mark Miller, both fifty-six, wanted their small lakeside rambler in Cornelius to function as a two-person home 90 percent of the time. The other 10 percent, it had to accommodate their kids visiting from college, other family and friends, and the occasional overnight guest.

To accomplish this, they focused on what Joan calls "the hub of the home," the kitchen and adjacent great room, which consumed about 897 square feet. "We wanted the kitchen to be a major focal point of the central living area since it would be viewed and used by everyone," Joan says. "We envisioned a kitchen that had beauty and brawn, functioned well, and took advantage of the views."

The 1980s kitchen had been renovated once in the early 1990s, but that overhaul had done nothing to open up the dark interior room with no windows. The Millers recruited Don Duffy Architecture, Caren Bistany at Bistany Design, and Thomasson Construction to put together a design that would make the kitchen worthy of its prominent central location. One of the first steps when construction began in early 2009 was removing a thirteen-foot bank of overhead cabinets that divided the kitchen from the great room to reveal a 180-degree view of the lake and allow natural light to reach the once-gloomy kitchen.

The Millers also added a freestanding island, honed granite counters (and a marble one in the baking area), a red AGA Cooker with a professional stainless steel hood, and plenty of storage and workspace. By March 2010, they had the kitchen of their dreams.

What the realtor says

"The homeowners added another 500 square feet to the space, which is an immediate added value to the home's market value. [The kitchen] is the heart of the home for many people and is a major deciding factor. People looking to purchase these days are going for homes that are move-in ready in which they don't have to renovate a kitchen." —Ryan S. Willis, Realtor/owner, Boxwood Realty

Where They Added Value